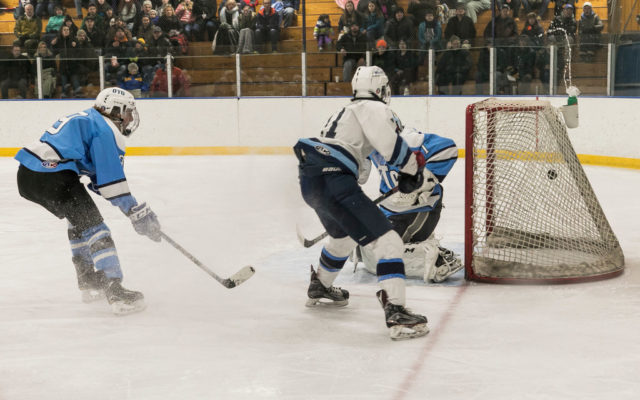 Kevin Sjoberg • February 28, 2019
On Feb. 8, Presque Isle senior captain Thomas Patenaude thought his hockey season may have come to an end during the first shift of a home game against Hampden Academy.

PRESQUE ISLE, Maine — On Feb. 8, Presque Isle senior captain Thomas Patenaude thought his hockey season may have come to an end during the first shift of a home game against Hampden Academy.

Patenaude absorbed a hit which forced him out of the match. Fearing a broken collarbone, he instead was diagnosed with a displaced collarbone and was able to return to the ice eight days later after missing two games.

The Wildcats are glad to have the talented forward healthy for the playoffs and he put together a clutch performance Wednesday, scoring three times in the 4-1 Class B North quarterfinal playoff victory over John Bapst at the Forum.

“I wasn’t expecting to be back at all,” Patenaude said. “I was really worried because I thought I broke it, but thankfully I’m back.”

The goals were his 24th, 25th and 26th of the season and gave him 97 points over his career. The scores helped his third-seeded Wildcats advance to the semifinal round and a matchup against the No. 2 Waterville-Winslow Riverhawks at 1 p.m. Saturday at Colby College in Waterville.

Patenaude put Presque Isle (16-3) on the scoreboard at the 7:29 mark of the first period by tallying a backhander from a tough angle on the right side off an assist by defenseman Cameron LeVasseur.

The sixth-ranked Crusaders (8-10-1) struck back only 52 seconds later as Stephen Gilbert connected from the top of the left circle and the puck got past PI goaltender Andre Daigle, but that was the only shot that eluded the senior all night long as he and the Wildcat defense displayed their continued improvement.

“We knew we had to stay tough on D,” said PI defenseman and captain Torey Levesque. “We had some bad games at the beginning of the season and we were letting too many goals in, so we really worked on that this year and that was pretty evident tonight.”

Meanwhile, Patenaude was just getting started. With 2:05 left in the opening period, he got loose on a breakaway down the left side and faked a shot to get Bapst goaltender Loukas Collatos moving in the wrong direction and then tucked the puck in from the right for the prettiest goal of the game.

“I got past the defense and I said, ‘You know what, I could shoot but I’d probably miss the net,’ so I deked him and scored,” Patenaude said.

The second period appeared as if it would end up scoreless for both teams, despite a total of 26 shot attempts between the two squads, but Patenaude pounced on a rebound and sent a shot past Collatos to make it 3-1 with 32 seconds remaining and complete the hat trick. Jonah Roy and Jake Stevens assisted on the play.

“Just give him a puck and he’ll do whatever he wants with it,” Levesque said of Patenaude’s performance. “He just came off an injury and we weren’t expecting him to be at full force, but you couldn’t even tell he was hurt and it’s definitely easier having him on your team.” 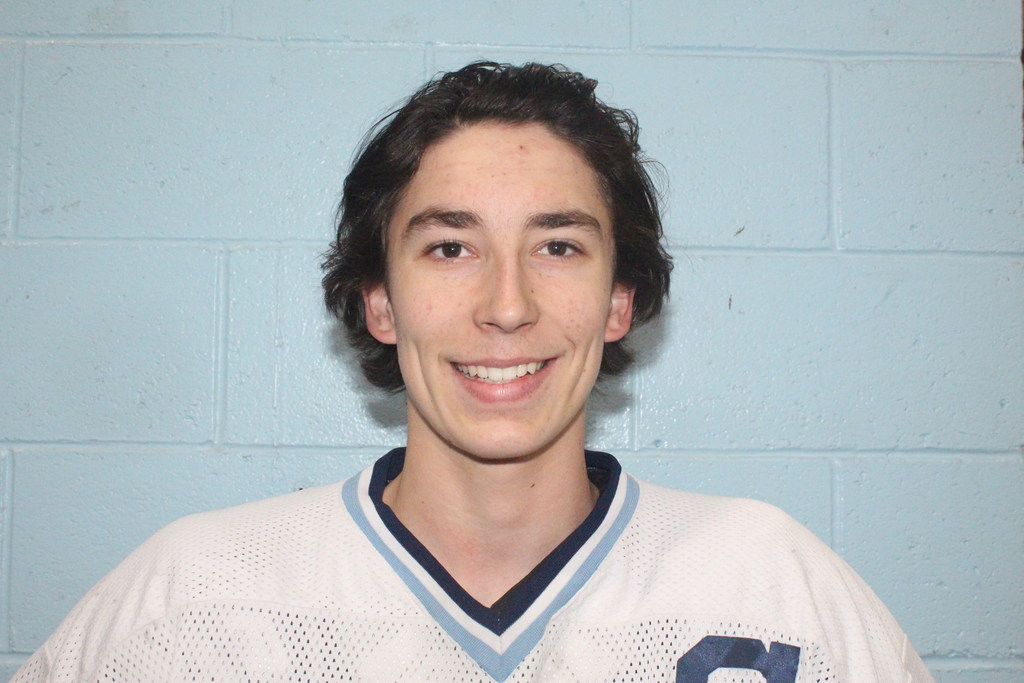 “Thomas’s speed and strength are special and his hockey IQ is off the charts,” said Wildcat head coach Carl Flynn. “He’s a great anticipator as he’s one of those kids who goes where the puck will be and not where the puck is. I’m very happy for him, especially coming off that injury from three weeks ago.”

The Wildcats owned the territorial advantage in the third period, but PI survived a shot off the crossbar before Daigle made a couple big saves 30 seconds apart midway through to keep it a two-goal lead.

Presque Isle added a final goal with 1:49 to play when junior Connor DeMerchant scored off a Colby Carlisle assist.

Daigle faced 28 shots on goal, while the Crusaders’ Collatos was peppered for 37. The game included only three penalties — two by John Bapst and one by the Wildcats. The Crusaders’ second one, which came with only 11 seconds left, led to the ejection of junior forward Ben Spear.

The Wildcat coach said his team was able to persevere, despite not having practiced since Monday, due to school being cancelled Tuesday and Wednesday, and not playing a game since Feb. 18.

“We were definitely out of our routine and I thought we were a little sloppy,” Flynn said. “But we persevered in what we predicted would be a gritty game. We knew we wanted to fight for every puck and be the first on the puck and make the most of any advantages that we got. All of our goals were the result of hard work.”

Patenaude said getting a win in front of a good crowd was a great way to close out his career on Forum ice.

“I’ve been playing here since I was 3 years old, so it hits me in the heart, but I’m glad that we won and everybody came out today so it was great support,” he said. 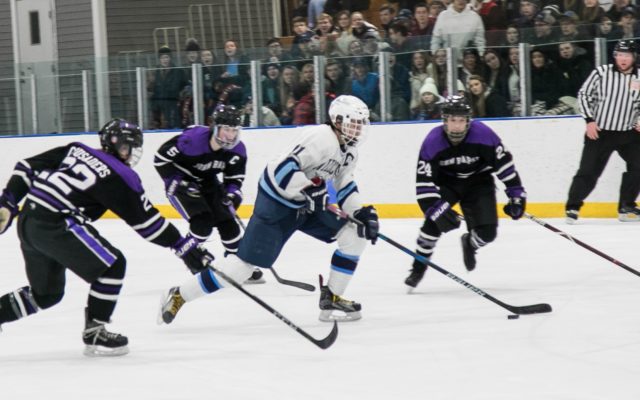 Thomas Patenaude of the Presque Isle Wildcats moves the puck while being chased by John Bapst defenders, from left, Dom Needham, Ben Spear and Colby Brown during Wednesday’s quarterfinal match at the Forum in Presque Isle. (Courtesy of Terry Sandusky) 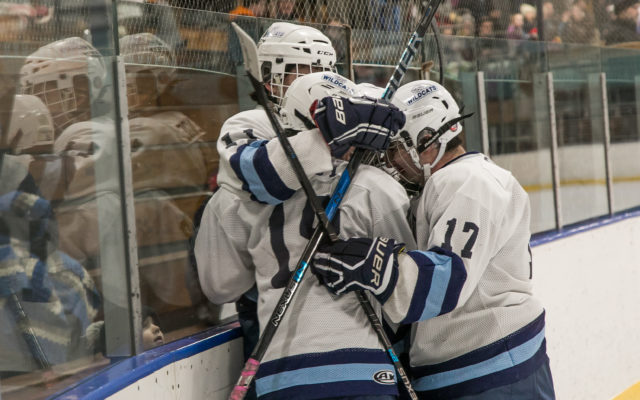 Thomas Patenaude of the Presque Isle Wildcats, left, celebrates with teammates Cameron Levasseur (19) and Noah Roy (17) after scoring one of his three goals in Wednesday’s quarterfinal playoff win over John Bapst in Presque Isle. (Courtesy of Terry Sandusky) 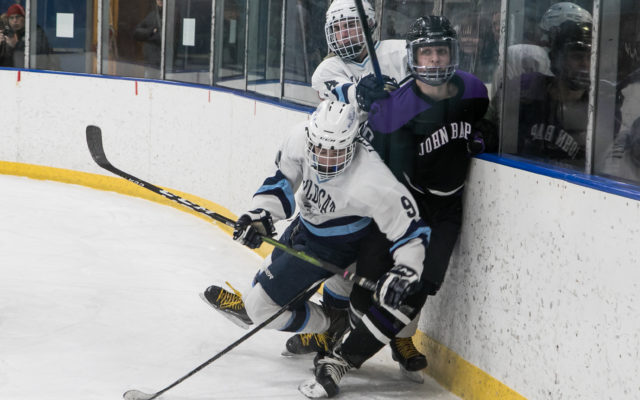 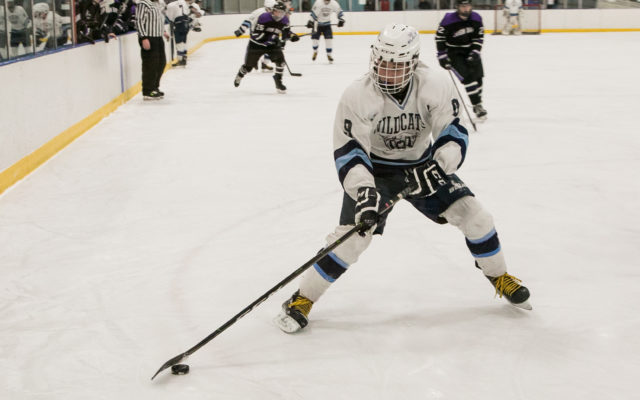 Gage LeTourneau of the Wildcats handles the puck in the corner during Wednesday’s quarterfinal hockey match against John Bapst.
(Courtesy of Terry Sandusky) 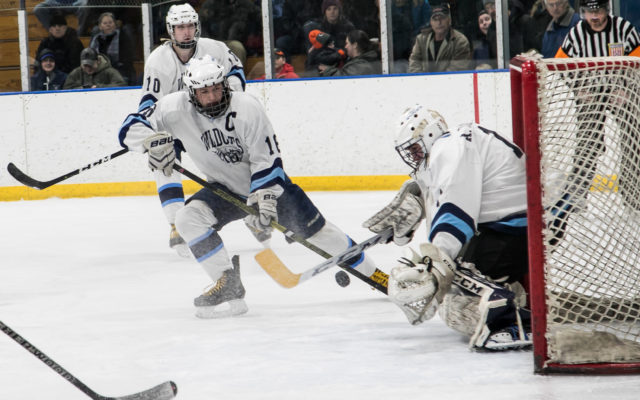 Goaltender Andre Daigle tries to collect a loose puck while Presque Isle teammates Torey Levesque, foreground, and Jaren Winger get ready on defense during the Class B North quarterfinal playoff match at the Forum Wednesday. (Courtesy of Terry Sandusky) 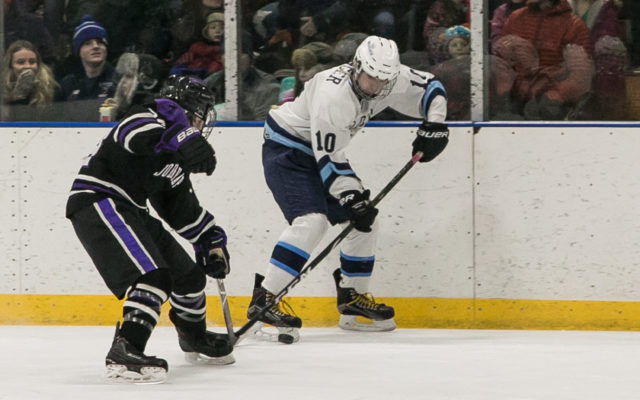 Wildcat defender Jaren Winger tries to get control of the puck as a John Bapst player closes in during Wednesday’s Class B North quarterfinal hockey match at the Forum in Presque Isle.
(Courtesy of Terry Sandusky)

Forbidden foods for our four-legged friends are many and can be very dangerous if ingested. Sometimes, we give our pets leftovers or what we consider treats. According to many sources, some human foods can make an animal very sick, and in certain cases can even be lethal.
What's Happening This Week END_OF_DOCUMENT_TOKEN_TO_BE_REPLACED