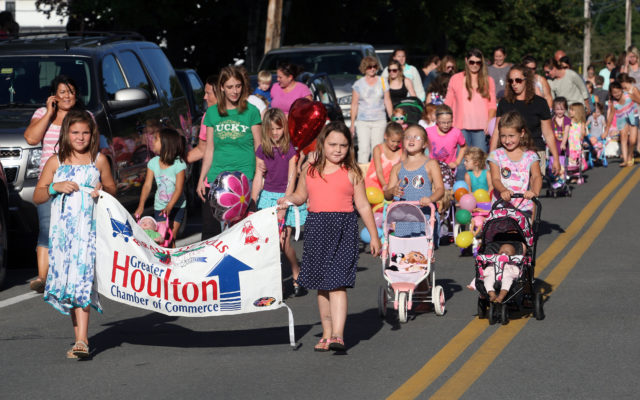 Jen Lynds • August 16, 2019
More than 30 years later, Aleshia Hagan still has memories of polishing the wheels of her Cabbage Patch doll carriage for the procession.

HOULTON, Maine —More than 30 years later, Aleshia Hagan still has memories of polishing the wheels of her Cabbage Patch doll carriage for the procession.

The Portland resident, who grew up in Houlton, said recently that she looked forward to every August when she was a child. Not only because she would get to go back to school and meet new friends and teachers, but also because it would mean it was once again time for the annual Parade of Dolls that signaled the start of Potato Feast Days in Houlton.

“It is hilarious now looking back on how excited my friends and I got over that event,” she said, speaking of the procession hosted by the Greater Houlton Chamber of Commerce. “We would have only been back in school for a week or two by then, but we’d all be talking about what doll we were going to put in the parade and if we were going to carry the doll or decorate their strollers.”

Open to both girls and boys, the event allowed children to showcase their favorite toys and accessories.

The route was short, starting from the Houlton Recreation Department and ending at Monument Park, but it was a highlight of the summer, Nancy Ketch, the town’s economic and community development director, recalled recently.

“It was always a really fun event, and pretty popular,” she said. “I remember I counted one year and there were between 80 and 100 kids taking part.”

The date the event started or how it came about was hard to determine. Ketch, who went to work for the chamber in 1987 as a marketing director during the town’s revitalization project before becoming executive director in September 1988, said that the event was going on when she was first employed there.

“I believe it started in the early 1980s,” she said. “I know we had bulletins out there once saying that it was the ‘fifth annual’ parade or something.”

Hagan recalled parading a series of Cabbage Patch dolls through the streets of town during the three or four years that she participated in the event. Her two brothers, she remembered, once walked with their Spiderman dolls.

Laura Oliver, a former Houlton resident who now lives in Presque Isle, said that she and her sister also took part in the event for several years.

“I loved it,” she recalled. “The weather always seemed to be gorgeous, and you would see all of your friends. I was big on those Real Baby dolls when I was a kid, so I know I pushed one of those in a stroller. But most of my friends liked Cabbage Patch dolls. And you always got one girl who would push Barbie in her dream car through the street.”

Ketch said that when she was executive director, fliers about the event were taken into schools to get children to participate.

“Schools were still getting out for harvest break back then,” she said. “So we would take the fliers into schools right after the first day in early August so that all of the kids would know about it. Now, the kids are out of school during Potato Feast Days.”

Other chamber and town employees chipped in to make the event even more special, she said.

Gary Edwards, who was the town’s parks and recreation director for 22 years, would “borrow big speakers and drive a tail car behind the kids playing parade music.”

“It was the greatest thing,” Ketch recalled. “He had this cassette tape of parade music he would put in every year and drive behind the kids down the street. So you would have the police car leading the parade and him at the end with the music.”

The event has now been expanded into the Doll and Wagon Wrangler Parade. It continues to end with juice and cookies for the participants.

“I know a lot of my friends have fond memories of that little parade,” Hagan said Friday.

Just when we thought we were out of the woods with kitten season, it has hit full force.  The past few days have been difficult answering the phone and hearing the stories of why people have litters of kittens they need to surrender.
Campaign Corner END_OF_DOCUMENT_TOKEN_TO_BE_REPLACED