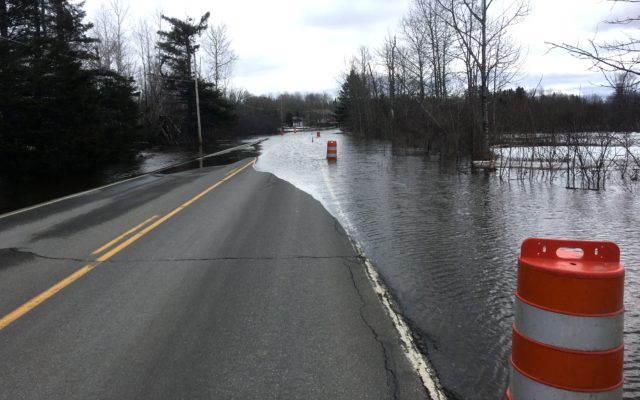 Staff Report, Special to The County • April 13, 2017
Route 164, the main road between Washburn and Presque Isle, was closed last evening due to flooding in the Churchill Brook area near the Aroostook Hospitality Inn and as of now remains closed.

CROUSEVILLE, Maine — Route 164, the main road between Washburn and Presque Isle, was closed last evening due to flooding in the Churchill Brook area near the Aroostook Hospitality Inn and as of now remains closed.

There are signs posted at north and south ends of the Washburn Road saying the road is closed. If you’re traveling to or from Washburn the Parsons Road is open.

In their morning Facebook update, the Emergency Management Agency reports the following situation regarding rising water levels in Aroostook County rivers and streams:

– Ice remains jammed in the Crouseville area, nearby Churchill Brook, between Presque Isle and Washburn. Water continues to cross the road in this area, and the road remains closed.

– Ice released from the Caribou Dam at approximately 10:14 p.m. Wednesday, April 12 evening. No reports of issues as ice moved downstream.

– Ice that was held up in the Fort Fairfield area released and pushed over Tinker Dam late last night. This caused water impacting Russell Rd to recede. Russell Road is now open to traffic.

– Ice remains jammed in the Masardis area, between Garfield Road and the town. Rising water due to this minor ice jam has not yet impacted Route 11 or any home, but local officials will continue to monitor.

– The small ice jam in the St. John Plantation area remains in place, but is not impeding river flow as water continues to flow freely on the Canadian side of the river in this location. The size of this jam has reduced as sections of it release a bit at a time.

– No concerns downstream until Van Buren.

– Ice remains jammed in the Van Buren area, and water continues to rise in that area. Currently monitoring minor impacts in low lying areas in the Keegan area of Van Buren and downstream. No specific threats or road closures in this area currently.

– U.S. Route 2 bridge over Dyer Brook remains closed at this time due to potential for “scour” occurring at the bridge.