Midsommar 2016 Highlights for Vimeo from Crown Of Maine Productions on Vimeo.

Contributed • June 4, 2017
An annual festival like Midsommar in New Sweden, planned for June 16-17, presents a challenge every year.

NEW SWEDEN, Maine — An annual festival like Midsommar in New Sweden, planned for June 16-17, presents a challenge every year.

“We need to keep the traditional favorites, but introduce new events to keep the festival fresh,” said festival co-chair, Brenda Jepson of Madawaska Lake. “If we are very lucky, the events are both and we are very fortunate to have several examples of that this year,” she said.

Buried in the basement of the Nylander Museum, Jepson discovered last year (while collecting Nylander’s photo collection to display at Midsommar) some paintings that Nylander did.

“We knew he supported himself as a house painter while looking for fossils up and down the Eastern Seaboard, but we had no idea that he painted art,” she said.

This sparked an idea for this year to display these hidden treasures, and to showcase other hidden artistic talent in Maine’s Swedish Colony.

An art exhibition, Maine Swedish Colony: Old and New,  will feature paintings depicting the history, heritage and landscapes of Maine’s Swedish Colony with a dozen artists included. Some are doing special new work for this exhibition.

“It’s amazing what happens when we start to discover hidden talent in our own community,” said Jepson. One new artist whose work will be displayed at the art exhibition is Andrea Peterson, who has done two special paintings to choose from for a new Midsommar T-shirt (sales of which will benefit the NS Historical Society.)

Fans of New Sweden Historical Society on facebook helped the event organizers choose the final design showing the little dancers around the Midsommar Pole and the T-shirts will be on sale for the first time Midsommar weekend.

An award-winning film Jepson made with her students in 2000: “Stan’s A Jewel In The Crown Of Maine” will be shown at the New Sweden Baptist Fellowship Hall. Stan Thomas, who attends the church, is well known as former owner of Stan’s Store at Madawaska Lake – home of the 10 cent coffee.

Stan will be the guest of honor and event organizers hope many of the old crowd who hung out at Stan’s will come to help reminisce. There also will be a display of Stan Memorabilia in the vestry – from T-shirts, to paintings done of Stan and his store, to pens, mugs and photos.

Another blast to the past is a revival of the New Sweden Adult Folk Dancers, led by Luke Lagasse, after a 13-year hiatus. It has taken two years of practices, but the troupe will perform this year at Thomas Park on Sunday the 18th with some of the dancers wearing heritage costumes.

Two male dancers will perform the Oxdans (a dance in which two men vie for the attentions of the same girl) and the whole group will perform a waltz written in 1987 by Benny Andersson of ABBA, from an album of Swedish folk music, “Klinga mina klockor.”

A quilt show and antique sewing machine demonstration proved such a hit last year that Arlene Plourde of the New Sweden Covenant Church is organizing it again, but with all different quilts – old and new. Nason Donahue will exhibit the sewing machines.

“All the other traditional events are the same,” says Jepson, “from a dinner dance where diners enjoy eating Swedish meatballs while listening to the Swedish Meatball Band playing Scandinavian favorites to children dancing around  the Midsommar Pole.”

Folks coming to the festival may not realize it, but in a town of only about 610 people, there are probably at least 100 involved one way or another to pull this off.

“It is a labor of love, but a thrilling one if you love history as so many of us do,” said Jepson.

For more information, see the New Sweden Historical Society Facebook page, where all events are listed. 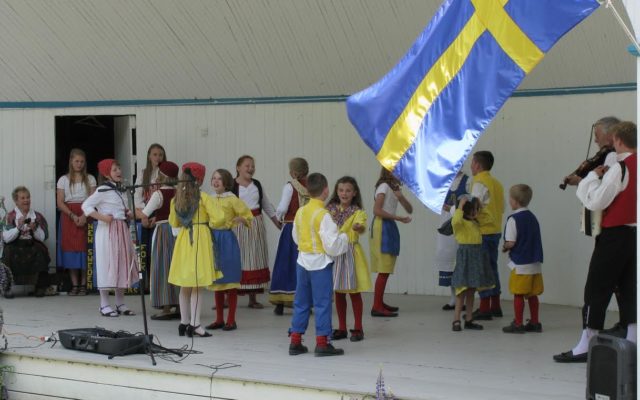 The New Sweden Little Folk Dancers perform to “We Are The Musicians” in a scene from the 2016 Midsommar Festival. The community is gearing up for this year’s event, slated June 16-17. (Contributed/Brenda Jepson)