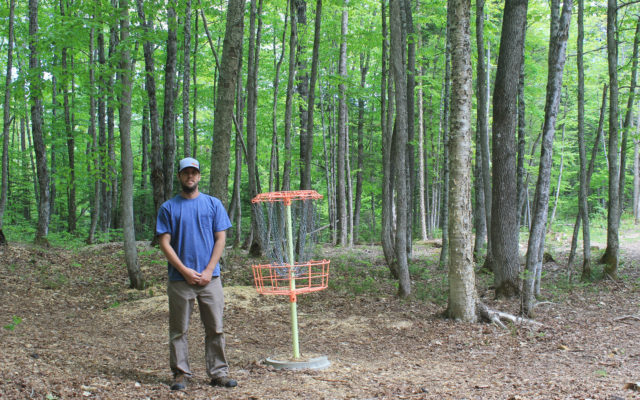 Anthony Brino • June 13, 2017
Owen Holland grew up playing in the woods behind his family’s home along Route 1 in Westfield and recently in those woods he’s built a disc golf course, offering a lesser-known outdoor sport in central Aroostook County.

Owen Holland grew up playing in the woods behind his family’s home along Route 1 in Westfield and recently in those woods he’s built a disc golf course, offering a lesser-known outdoor sport in central Aroostook County.

Holland’s Maple Ridge Disc Golf opened this spring for its first full season with 18 holes, and so far it’s going good as a business, he said.

“I’ve always loved the land since I was a kid. I know the property pretty good and always wanted to do something with it,” Holland said.

In the early 2000s, Holland fell in love with disc golf — a version of golf using Frisbee-type discs — at the now closed Enman Riverside Disc Golf in Caribou.

Holland later worked at the Caribou disc golf course and another one in Orrington while he was living in Bangor. When Holland moved back north, he saw an opportunity for the 64 acres of the mostly-wooded family land in Westfield.

“Disc golf is really good for all ages,” Holland said. While the activity’s main demographic may be 20- and 30-somethings, it’s also well suited to active senior citizens, he added.

“Down in Bangor a lot of older people like it. It’s a good low impact activity that keeps you moving and takes you for a walk in the woods if nothing else.” 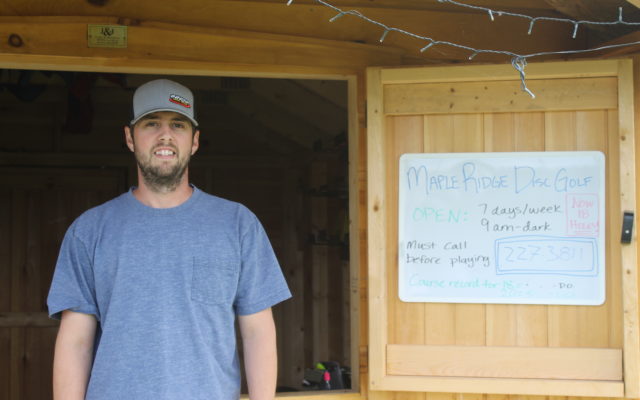 Owen Holland, the owner of Maple Ridge Disc Golf in Westfield, stands in front of the Frisbee golf course’s shop on June 6. Holland grew up on the property and designed and carved out the forest trails for the course. (Anthony Brino)

Like regular golf, disc golf can be played solo or in groups, and strictly for fun or for competition.

Maple Ridge Disc Golf has already attracted a group of competitive players, and the course holds tournaments throughout the year, Holland said. The course also has hosted groups, such as youths playing the course with the Presque Isle Recreation Department.

The course takes players on a one-to-two mile walk on gently-sloping trails in a tall, mixed forest that hosts plentiful maples as well as ash, birch, apples and red pine.

“On hole 16, we have a nice ridge of maples and the maples grew out of the ridge sideways,” Holland said, explaining the origins of the disc golf course’s name. His favorite is the fifth hole, a sloping, downhill par 3 set in a heavy canopy of maple, beech and birch.

“I’d go to sleep at night just thinking about the layout. There is a bit of elevation so I wanted to make it as easy for people to walk as I could.

Portions of the disc golf course once were home to potato fields until the 1960s and 1970s, before Holland’s family acquired it, and Holland said he can still see traces of rows of potatoes.

Holland is there most days as the main employee, and he’s already thinking of how to integrate an expansion of the course into the other half of the property.

“There’s room for more, maybe a second 18 or something. I’m still contemplating that.” 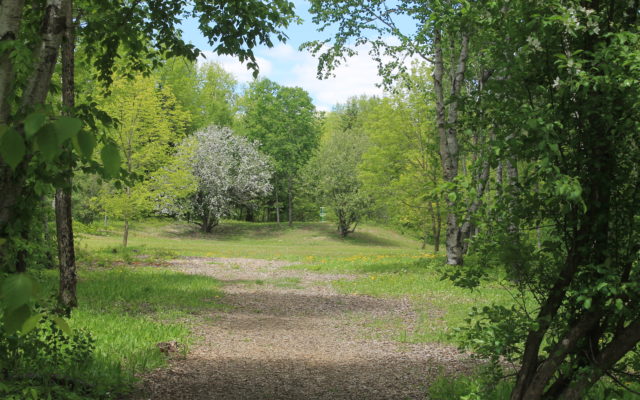 The third hole at Maple Ridge Disc Golf in Westfield. Cutting trails and thinning parts of the woods that now host the course revealed old apple trees that bloom and produce some fruit for fall players. (Anthony Brino)

Next year's Caribou City Council will include a new member and a longtime councilor thanks to Tuesday's election.
Pets END_OF_DOCUMENT_TOKEN_TO_BE_REPLACED

When I wrote the first story of our dog Odie, I didn’t know that I would write a Part 2, but there were so many more stories that I decided more of this little dog’s story needed to be told.
What's Happening This Week END_OF_DOCUMENT_TOKEN_TO_BE_REPLACED