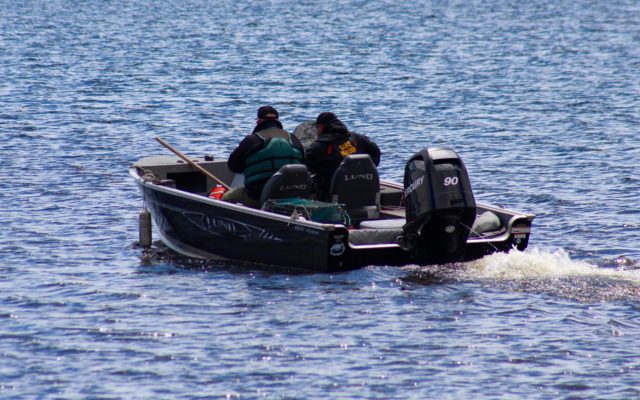 Jessica Potila • June 15, 2017
Her son wouldn’t be alive today if one of the other three men -- all presumed dead -- whose boat capsized on Square Lake Tuesday had not untangled his leg from the anchor rope, Stephanie Kelley said Thursday.

CARIBOU, Maine — Her son wouldn’t be alive today if one of the other three men — all presumed dead — whose boat capsized on Square Lake Tuesday had not untangled his leg from the anchor rope, Stephanie Kelley said Thursday.

“Someone saved my boy and I have no way to thank him,” an emotional Kelley said during a telephone interview from her Caribou home Thursday afternoon.

Her son, Charles Guimond, 23, is the only one of the four boaters, all from Fort Fairfield, found alive after he clung for hours to the overturned boat before it drifted to shore where he was spotted by a Maine Warden Service plane at about 5 a.m. Wednesday.

The body of 56-year-old Martin Chambers was recovered from shallow water on the lake’s southeastern shore Wednesday afternoon. The search continued without success as of late Thursday afternoon for his brother Mark Chambers, 51, and Eric Sherwood, 43.

Guimond was recovering from the ordeal at Cary Medical Center in Caribou where he was being treated Thursday for dehydration, high blood pressure and a breakdown of muscle tissue, according to his mother.

The four men had left the Chambers’ camp on Square Lake at about 3:30 p.m. Tuesday and planned to fish the thoroughfare between Square Lake and Eagle Lake when the 12-foot boat started to take on water as high winds caused swells of four to five feet, according to wardens.

Kelley said her son told her the boat started taking on water about 10 minutes after they left shore and that it capsized not long after while being pummeled by high waves.

Guimond told his mother that his foot became entangled in the anchor rope as the boat was taking on water and that Sherwood unraveled it, freeing Guimond just as the boat flipped over. Kelley added that Sherwood also offered life-saving advice to Guimond as the men were clinging to the boat in the cold and choppy water.

Each of the four men clung to the boat as long as he could, until eventually Guimond was alone.

“He said he kept screaming and screaming but nobody heard him,” Kelley said.

Eric Sherwood’s girlfriend, Afton Brinkmeier, became concerned when the men failed to arrive for a dinner she had prepared for them back at the camp. By midnight, Brinkmeier began knocking on other camp doors in the area in an unsuccessful attempt to find help. After a while, she discovered that Guimond had left his keys in the ignition of his truck, and she drove to Caribou where she contacted the Maine Warden Service at about 2 a.m.

Kelley said she believes her son drifted with the boat for more than 10 hours and about 5½ miles from where the boat capsized to the shore where wardens found him.

Guimond assisted wardens in the search effort on Wednesday, she said, and didn’t seek medical treatment until later that evening.

The warden service reported Thursday afternoon that pilot Gary Dumond had directed wardens in boats to a debris field of items on the lake, but that the two missing men had yet to be located. Wardens also used side scan sonar on Thursday to do a grid search of the bottom of the lake which is about 85 feet deep in the search area.

Kelley said that Guimond is struggling emotionally with the loss of the Chambers brothers and of Sherwood, whom she described as her son’s best friend.

She expressed sorrow for the families of the other men and counted her blessings that her son survived.

Writer Liz Theriault of the Fiddlehead Focus contributed to this report.