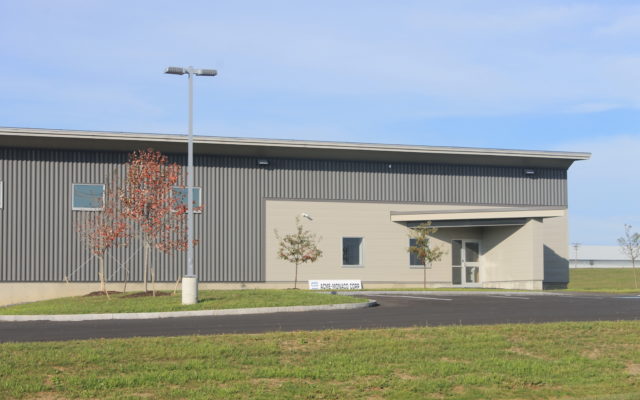 A long-in-the-making project is wrapping up at Presque Isle’s Skyway Industrial Park, leaving medical device maker Acme Monaco with a new building and room to grow.

Acme Monaco is moving from two locations at the industrial park to a new 16,300 square foot space on Central Drive.

“We can grow here and bring more equipment in for production,” said Rebecca Karabin-Ahern, co-president of the family-run, New Britain, Connecticut-based company.

Going on its 30th year in Presque Isle in 2018, Karabin-Ahern said the company is well-suited for the future and happy to have set up shop in the Star-City originally.

In the 1980s, Acme Monaco was looking to set up a second location outside of Connecticut.

“We looked at North Carolina and South Carolina, like a lot of companies did back then. One of our big customers at the time, Black and Decker, was based in North Carolina,” she said.

But after meeting with Presque Isle officials who pitched the industrial park and the region’s manufacturing workforce, the company decided to locate its other plant in Presque Isle. At the time, Aroostook County had a high unemployment rate as other manufacturers were closing.

“It just seemed like a natural fit for us to move here because of so much skilled labor,” Karabin-Ahern said.

Today, Acme Monaco has 68 employees in Presque Isle and is looking to grow to 75 to meet production demands.

Some employees have been with the company a long time, including some who’ve stayed since the company opened, she said. But like other employers across Maine, finding enough workers is a challenge in a region with a smaller, aging workforce.

“We have been having trouble recruiting. It’s tough. There are a lot of other industries up here that we’re competing with,” she said, adding that the company is still filling positions.

Acme Monaco’s new building was made possible in part thanks to a rare confluence of government grants totalling $3 million, from the Maine Community Development Block Grant program, the federal Economic Development Administration and the Northern Border Regional Commission.

Karabin-Ahern said the company also is investing “north of six figures” in the new plant, primarily in equipment, though she declined to specify an exact amount.

Looking ahead, Karabin-Ahern said the global demand is strong for the company’s products. About 40 percent of its products made in Presque Isle and New Britain are exported outside North America to Europe and South America, while the plant in Singapore serves Asian markets.

Next year's Caribou City Council will include a new member and a longtime councilor thanks to Tuesday's election.
Pets END_OF_DOCUMENT_TOKEN_TO_BE_REPLACED

When I wrote the first story of our dog Odie, I didn’t know that I would write a Part 2, but there were so many more stories that I decided more of this little dog’s story needed to be told.
What's Happening This Week END_OF_DOCUMENT_TOKEN_TO_BE_REPLACED