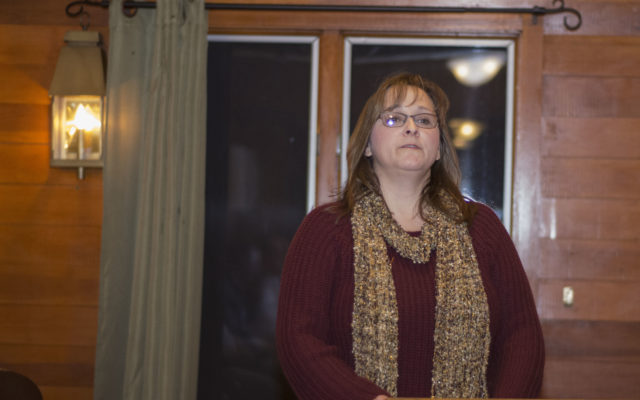 Chris Bouchard • November 22, 2017
Earlier this year, Limestone residents voted overwhelmingly in favor of withdrawing from RSU 39 and the town has since formed a committee with the task of following through with the process.

LIMESTONE, Maine — Earlier this year, Limestone residents voted overwhelmingly in favor of withdrawing from RSU 39 and the town has since formed a committee with the task of following through with the process.

The chair of that committee, Kathie Beaulieu, gave Limestone residents an update on the group’s progress during a Nov. 16 annual chamber of commerce and development foundation meeting at the Limestone Country Club.

She began by explaining that withdrawing from a school unit is a long process, citing negotiations involving how property, buses, and supplies that were once shared by the RSU 39 member communities of Limestone, Caribou, and Stockholm, will be divided after the split.

“The part we’re struggling to finalize now is whether or not we pay for the new school after we withdraw,” Beaulieu said. “It could be as much as $20,000 per year for 20 years, so obviously we’re trying to avoid having to pay for that.”

Residents of all three communities were asked in February if to approve a new $45 million dollar prekindergarten to grade eight school for the RSU. Voters were asked if they would accept the base project, which includes all completely state-funded aspects and also if they would accept approximately $2 million more worth of taxpayer funded additions for expanded gymnasium and music room space.

While Caribou and Stockholm voted in favor of both of these questions, Limestone voters narrowly rejected the base project and taxpayer funded additions.

Earlier this year, RSU 39 board members also voted to move Limestone’s high schoolers from the Limestone Community School building to Caribou High School. That decision inspired Limestone residents to circulate a petition to withdraw from RSU 39.

From there, residents accepted spending up to $25,000 of the town surplus on hiring attorney Dan Stockford and education consultant Dr. Mark Eastman to look into whether or not withdrawal is a financially viable option. One month later, citizens voted again to approve spending up $40,000 of reserve funds to begin withdrawal, a process that included the formation of a withdrawal committee and additional services from Stockford and Eastman.

Beaulieu told residents that the committee also is negotiating the tuition rate the town will pay RSU 39 to send Limestone students to school in Caribou, if the town does not reopen the high school or if some parents want to send their children to Caribou schools.

“The rate we asked for was the same as Woodland,” Beaulieu said. “They’re paying about $8,000 and we want the same rate.”

Withdrawal committee members are aiming to officially withdraw by July 1 of 2019. Beaulieu said the date would have been July 1 of 2018 but since the agreement was not completed by June 30 of this year, residents will have to wait until next year’s election in November to decide if withdrawal is a good choice for the town.

Looking forward, the committee chair said their consultant and attorney are looking into all expenses and possible revenue resulting from the withdrawal in order to “get a better idea of what the school will look like in the future.”

While grades nine through twelve are being bused from Limestone to Caribou, Limestone Community School still houses prekindergarten to grade eight, as well as the Maine School of Science and Mathematics.

“Right now it looks like we’ll break even if we were to open the high school back up,” she said, adding that the committee would like to improve upon what the high school had before it was closed.

Beaulieu said the benefits to withdrawal include protection from future closure attempts and control over the school building and property.

“We can give students the education they deserve and have control over it,” Beaulieu said. “The town can decide how to spend money on education.”

When Beaulieu asked if anyone had any questions, an audience member thanked her for her involvement in the withdrawal process, adding that “it’s a lot of work” and that her efforts were appreciated.

Just when we thought we were out of the woods with kitten season, it has hit full force.  The past few days have been difficult answering the phone and hearing the stories of why people have litters of kittens they need to surrender.
Campaign Corner END_OF_DOCUMENT_TOKEN_TO_BE_REPLACED