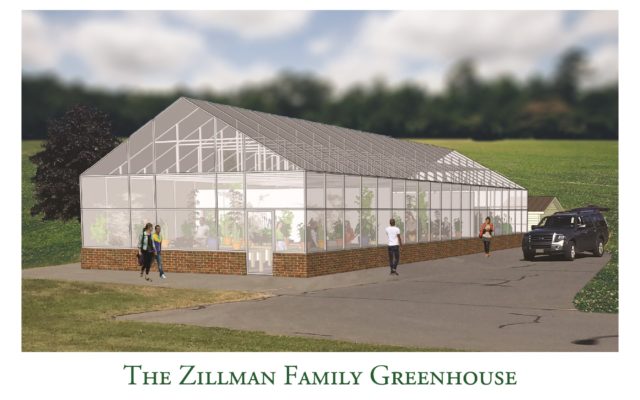 Anthony Brino • March 12, 2018
This fall the University of Maine Presque Isle will start offering a bachelor's degree in agriculture and is also expecting to open a new research greenhouse.

PRESQUE ISLE, Maine — This fall the University of Maine Presque Isle will start offering a bachelor’s degree in agriculture and is also expecting to open a new research greenhouse.

After many years of Aroostook County students studying agriculture at the University of Maine Orono, UMPI will be offering a bachelor of science degree in agriculture that covers the multidisciplinary nature of modern farming, said president Ray Rice during a March 7 event at the president’s house.

UMPI faculty and administrators have been brainstorming for years about offering agriculture courses or a degree, Rice said. In 2015, UMPI started a sustainable agriculture minor and since then Rice said that high school educators from around the area urged the university to launch an agriculture degree.

The degree program is set to launch for fall 2018, along with the anticipated opening of a new research greenhouse.

“People realize this is a natural fit,” said Jason Johnston, dean of UMPI’s college of arts and sciences. “We’re surrounded by farmland.”

Johnston said the degree program will include courses in agricultural science as well as technology and business.

There will be “a lot of hands on coursework that really is going to train students how to drive a tractor with a GPS system, how to operate greenhouse and irrigation equipment, and how to run a modern, big farm,” Johnston said.

He added that the program will feature guest speakers, adjunct teachers from the local farming industry and collaboration with the Cooperative Extension and organizations such as the Maine Potato Board and Maine Sustainable Agriculture Association.

Ag program students also will have the chance to participate in research projects at the new 2,400 square foot greenhouse that will be built near Gentile Hall.

Coming to a total cost of $495,000, the greenhouse will have two seperate climate-controlled sections that can support two research projects and teaching at the same time, Johnston said.

The greenhouse will be named after Don and Linda Zillman, who donated $100,000 to the project. Don Zillman, a University of Maine law professor, was a former UMPI president from 2006 to 2012 and was credited with starting sustainability initiatives such as the campus wind turbine, Rice said.

“It continues the tradition of great faculty researchers and teachers,” Zillman said of the degree program and greenhouse.

The university has roughly $250,000 left to raise to complete the greenhouse project, and there are several active grant applications and discussions with potential donors underway, said Deborah Roark, university advancement and enrollment director.

I was mentioning to our board of directors this past week that I got a quarterly report from a large online retailer who will donate a portion of my purchases to a charity I select.
Campaign Corner END_OF_DOCUMENT_TOKEN_TO_BE_REPLACED