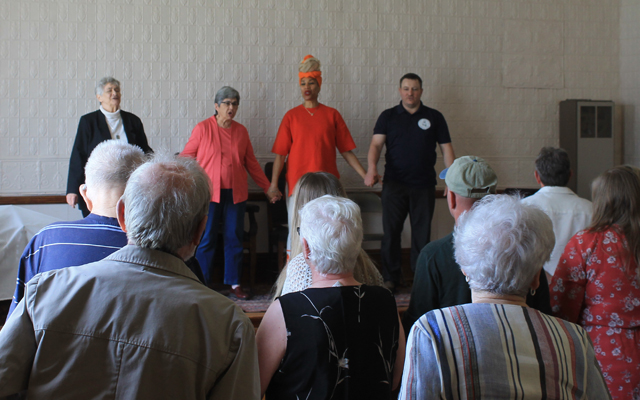 Anthony Brino • June 5, 2018
The Maple Grove Friends Church in Fort Fairfield was once a staging point on the Underground Railroad, hiding refugee slaves before they crossed the border into Canada at the height of fugitive slave trade in the years before the Civil War.

FORT FAIRFIELD, Maine — The Maple Grove Friends Church in Fort Fairfield was once a staging point on the Underground Railroad, hiding refugee slaves before they crossed the border into Canada at the height of fugitive slave trade in the years before the Civil War.

It’s an under-recognized and little-documented history due to the nature of secrecy that made the Underground Railroad possible, when Quakers and other abolitionists risked prison time and stiff penalties for aiding fugitive slaves after 1850.

Despite the lack of records, the history of the Underground Railroad in northern Maine and Atlantic Canada is being revived and celebrated today as a way of understanding both the past and present.

More than 50 people from Maine, Canada and elsewhere spent the morning of Sunday May 27 at the vacant but well-preserved Friends Church in Fort Fairfield for what organizers plan to make an annual open house.

“An event like this is special because you bring people together to tell this story and it brings back our history. ” said Ralph Thomas, program coordinator and co-founder of the New Brunswick Black History Society.

Attendees discussed what is known about the church’s role in the Underground Railroad, learned about the Quaker tradition and enjoyed a potluck lunch on a sunny day looking east to the border with New Brunswick — across the land fugitive slaves likely walked to the safe landing of Tomlinson Lake in Andover, New Brunswick.

Thomas, who lives in St. John and traces his family’s roots to Black Loyalists and migration from the West Indies, said he and others have been working to spread the story of New Brunswick’s role in Underground Railroad at schools and history centers like the King’s Landing Living History Museum

“The Underground Railroad is something we in New Brunswick didn’t have a clue about really. Now students and teachers are learning about black history.”

The Maple Grove Friends Church was built in 1859 by Joseph Haines, the first Quaker in Fort Fairfield. Today the church is owned by the Fort Fairfield Frontier Heritage Historical Society and listed on the National Register of Historic Places as one of dozens of Maine places thought to have been involved with the Underground Railroad.

The Church’s anti-slavery legacy was more recently highlighted by the late husband and wife team of Art and Ruth Mraz of Fort Fairfield, said Joe Gee, of Carlingford, New Brunswick, who organized the event.

“A lot of what we know is from oral history. What was told is that fugitive slaves were hid underneath the floorboards of the stages. It wasn’t until they began work on the church here where they removed a carpet off the top of the stage, and saw a hole that had been prepared.”

It’s thought that Haines and other Quakers told fugitive slaves to leave the church and follow moose trails east to Tomlinson Lake, where the Tomlinson family would give them accomodations before they joined other refugee communities in other parts of Atlantic Canada, Gee said.

Marilyn Rooper, a Quaker Church member from Houlton, said that numerous Maine families, as well as communities from the state’s Wabanaki tribes, are thought to have played a part in the Underground Railroad.

Rooper said her family once heard a story from a now-deceased elderly woman in Oakfield who recalled family stories of several homes in that area hosting fugitive slaves on their way to Canada.

“The bounty hunters were watching the border up here,” she said. Refugee slaves travelling north through Maine probably took the more difficult routes available and followed the Penobscot watershed upstream, then crossing mountains into the Aroostook and St. John River watershed, Rooper said.

“If you come up the Penobscot to the Mattawamkeag, which goes through Oakfield, and then up the east branch of the Mattawamkeag to the St. Croix stream, then you can get into the Aroostook River, three miles west of this church.”

June is generally a month that also marks the height of “kitten season,” when large litters of kittens are born and often end up in animal shelters.   Luckily, here at the Central Aroostook Humane Society, we have seen a dramatic drop in the cat population over the past five years, mostly due to our spay and neuter program.
What's Happening This Week END_OF_DOCUMENT_TOKEN_TO_BE_REPLACED