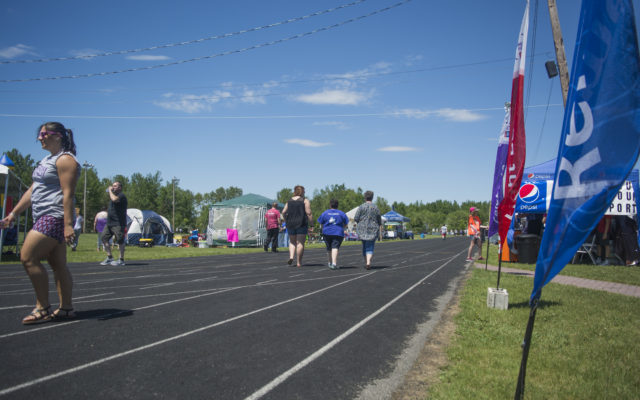 Relay For Life brings in close to $50,000 for cancer research

Luminaria also were lit to honor those lives lost to all forms of cancer.

As of Monday, local teams and organizers had collectively raised $47,437.11 for the American Cancer Society to enhance awareness and support research.

Aroostook Relay for Life organizer Cuppy Johndro was particularly pleased with the weather, as many previous events landed on rainy days.

“We have the perfect day,” she said about an hour into the event, “which is amazing because we had seven years of bad luck.”

Johndro said the new schedule seemed to be working well, that more people were able to come during the day, and that the teams “loved the format.”

Many teams began preparing for the weekend event as soon as the 2017 relay ended, and one team, Team Pathways, didn’t register until the day before. 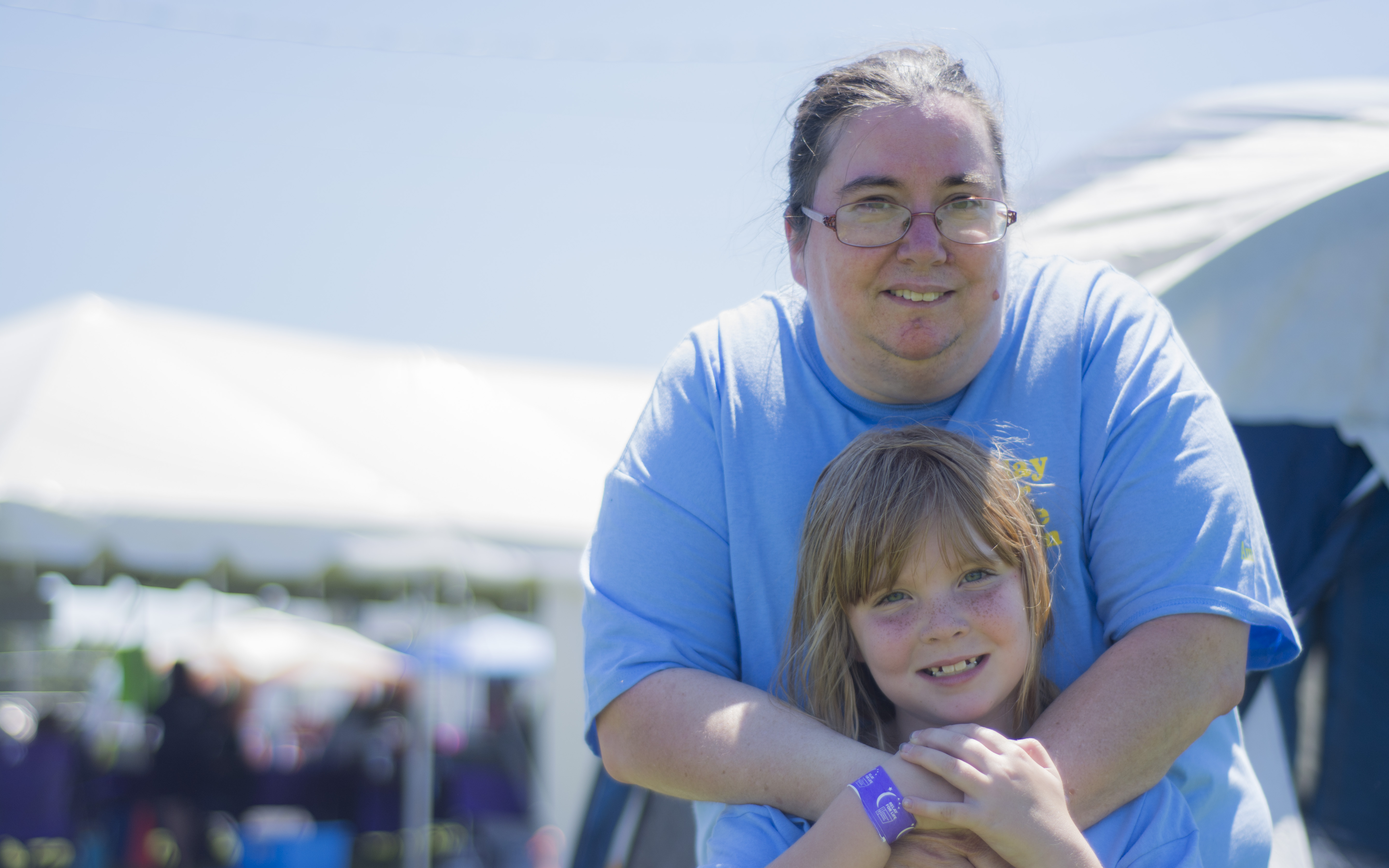 Amy Coppola and her 8-year-old daughter Luciana Pike make an appearance at the 2018 Aroostook Relay for Life in Caribou. Their team, “Stitching Our Way to a Cure,” has now attended the event three years in a row. (Christopher Bouchard)

“We have a brand new team who registered at the last minute,” Johndro said, adding that the Aroostook Relay is welcome to any and all who want to help.

“Teams here always help each other out,” Johndro said. “Nobody is competing; we all want the same thing. We’re here for all forms of cancer, and the money covers survivors and caregivers, who are really important because they take a hard hit, especially if [the cancer victim they’re caring for] passes and they’re left to pick up the pieces.”

Team Pathways Captain Crystal Lozier said the team consists of families and coworkers at Pathways of Maine, a mental health and counseling organization.

“We know that mental health is important during times of stress, so we make sure we’re right there to help families, and children, deal with any changes in a family member’s health,” Lozier said.

As far as what prompted the decision to register the day before, she said the team members had been thinking about it and wanted to make sure they “were doing it for all the right reasons.” When coworker was diagnosed with cancer, they decided to sign up.

“We plan on coming back next year,” she said. “We’re still buying food, going around the track, and playing the games this year, but next year we hope to start raising some money [for the cause] and having a better looking tent.”

Lozier said she and her team “know what to expect” for next year and anticipate getting started early.

For those dealing with cancer, Lozier said “it’s important to reach out” for help.

“Support is definitely a must,” she said. “We help families who need support, and having a team to back you up and find resources will help you stay ahead of the game, especially with cancer.”

Amy Coppola, captain of the team “Stitching Our Way to a Cure,” was diagnosed with cancer while pregnant with her daughter, Luciana Pike, who is now 8 years old. Coppola said it’s important for everyone to get screened earlier.

“She’s my miracle baby,” she said. “They found out I had thyroid cancer when I was pregnant with her.”

Coppola said she ended up giving birth two months early, and had her thyroid taken out one week later. Six weeks after that, she underwent her first treatment, and has “been clear ever since.”

Coppola’s team consisted of a mixture of family and friends, including her daughter and her daughter’s babysitter. While her team has had a presence for three years, 2018 was Coppola’s first time as a captain, a difficult but rewarding responsibility.

“It’s a lot of work,” she said. “I work 40 hours a week and then get everything set up on my off time. We’ve been getting ready all year. It’s hard to organize fundraisers, but everyone gets together and makes it happen.”

She said her team is already planning for the 2019 relay, and will bring back the most popular items for this year’s event.

In addition to hand stitched blankets, the team offered cookies and pies “in a jar,” where all the dry ingredients are packed together along with a recipe. The wet ingredients must then be added at home. They also offered chicken and beef stew for lunch.

“This is the first year I’ve done the relay where we actually had sunshine,” said Coppola. “I like it being all day instead of overnight, too. In the past, we’d only have captains and people affected personally, but the public would be gone after a certain point.”

The captain recommended folks get out and enjoy next year’s festivities or sign up now to participate, adding that the various teams are a great resource for anyone personally affected with cancer, or dealing with a loved one’s battle with the illness.

“If you know somebody with cancer or are going through it yourself, get in touch with somebody and join a team. Or just talk to them; they can help you get started.”

For more information, visit Aroostook Relay for Life on Facebook. 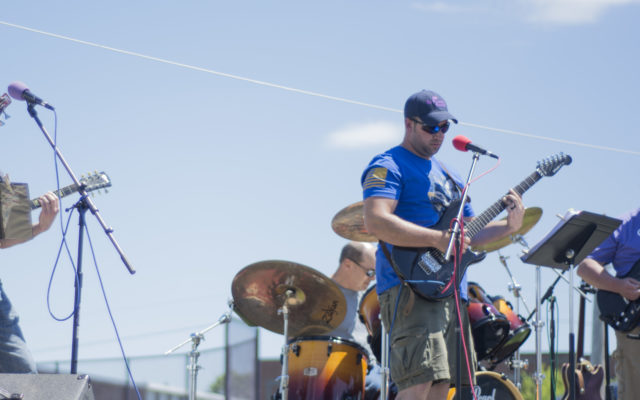 Local rock act No Pressure entertains guests with covers of classic hits during the 2018 Aroostook Relay for Life on Saturday. (Christopher Bouchard) 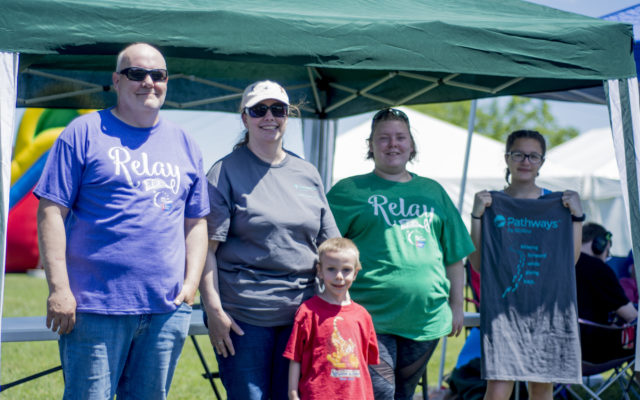 Members of “Team Pathways” made a last minute decision to sign up for the Aroostook Relay for Life on Saturday. Those pictured, are, from left, Eldon Searles, Anne Kane, Hunter Searles (in front of Anne), Crystal Lozier, and Summer Rivera. (Christopher Bouchard)

Only one member of Maine’s congressional delegation had come out in favor of impeaching President Donald Trump ahead of House Speaker Nancy Pelosi’s Tuesday announcement that the Democratic-led House of Representatives would begin an impeachment inquiry.
Pets END_OF_DOCUMENT_TOKEN_TO_BE_REPLACED

Last week, we received a phone call about a cat that was in desperate need of help. The young lady said she found a cat that was very skinny and crying and that there was blood in the snow.
Campaign Corner END_OF_DOCUMENT_TOKEN_TO_BE_REPLACED