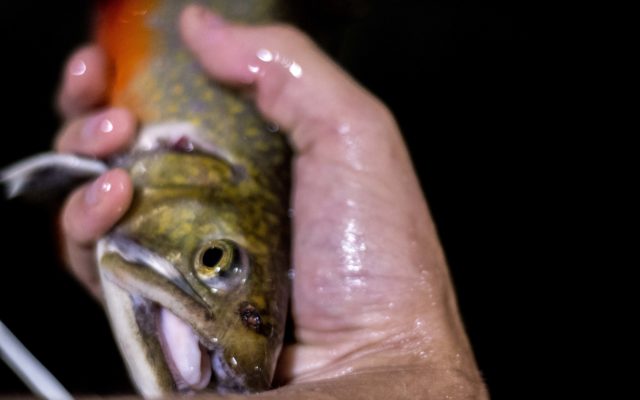 Chris Bouchard • July 14, 2018
The Micmac Fish Farm, located on Micmac Farms on the Presque Isle Road, is in its second season of selling trout to private stockers, restaurateurs, and members of the general public.

CARIBOU, Maine —  The Micmac Fish Farm, located on Micmac Farms on the Presque Isle Road, is in its second season of selling trout to private stockers, restaurateurs, and members of the general public

“It took about seven years from the groundbreaking until the time we put the fish in,” said Micmac Farms Marketing Manager Jacob Pelkey, adding that the hatchery was constructed over two tribal administrations and the project had to secure funding to be completed.

Micmac Fish Farm Manager Dave Macek, who also is the tribe’s environmental specialist, said he and Micmac Environmental Director Fred Corey applied for a $200,000 grant from the U.S. Fish and Wildlife Service, which allowed them to begin construction.

Pelkey said brook trout have tribal significance to the Micmacs, and that the fish was considered an “environmental indicator of how good the water is.”

“The tribe, historically, has always eaten brook trout,” Pelkey said. “Going forward, some of the tribe has lost the connection with the fish because they’ve lost some tribal land or the habit of going fishing, and may have adapted 21st century shopping habits of just going to the supermarket.”

Because of the trout’s significance to Micmac history and culture, Pelkey said “the tribe is really proud to raise it.”

He said the tribal administration also is “proud of hiring tribal members” for projects and employing “tribal carpenters and plumbers when they could.”

The fish farm currently employs five members of the tribe along with roughly four to six seasonal workers, according to Pelkey.

Unlike many trout found in Maine, the fish raised at the Micmac Fish Farm have bright pink flesh as opposed to white skin. Pelkey attributes this to feeding the trout “a high quality diet rich in Omega 3s,” consisting of freshwater shrimp, earthworms, and soy protein.

The fish themselves (Nesowadnehunk Maine Brook Trout, scientifically known as Salvelinus fontinalis) are picked up as eggs from the Enfield State Fish Hatchery in December of every year.

“We do not breed our own fish,” he said. “We want fish that are the genetic equivalent to the native strains in the wild.”

The fish are hatched in Caribou and grow up in water obtained from drinking water wells, and only contain trace levels of mercury from the shrimp.

“It’s not even a measurable amount,” said Pelkey. “Women who are pregnant and those who are susceptible to mercury can still safely eat this fish.”

The facility pumps oxygen in the tanks and recirculates fish waste back into a system that is emptied yearly and is used as plant fertilizer for other crops at the farm. Pelkey said the process creates a “wet fertilizer that is good for microbes in the soil.”

He added that many aquaculture facilities “tend to carry a lot of disease,” and that fish farmers work diligently to prevent this from happening.

“Every day we take a sample of fish, grade them, and take out their deformities,” he said. “We get rid of them before the disease occurs, because it would wipe out the whole system; we would lose every fish in the building.”

The racetrack shaped pools are a somewhat novel innovation, with Pelkey saying that their system is “one of the first in North America” to feature that design, as most facilities utilize circular ponds with one circulating water ring. The Micmac Fish Farm, on the other hand, utilizes three circulating water rings, which Pelkey says allows the fish to swim “in a more natural pattern.”

Ideally, fish are kept until they become 14 months old and about 14 inches long.

“Many fish are currently larger than this size, because they have been in our facility longer than we would have preferred,” Pelkey said. “This is fine, it is just preferred to reach 14 inches,” adding that a fish of this size will “dress out to about 0.8 pounds.”

Because of the emphasis on quality, Pelkey said members of the general public who visit the Caribou farm or Presque Isle farmer’s market can “buy a high quality, nutritious fish that wasn’t raised with any chemicals, antibiotics, fillers, or dyes, something unique compared to what Shop ‘n Save or Wal-Mart offers.”

The trout are also available as cooked dishes at the Northern Maine Brewing Company in Caribou as well as the Timberwolves Restaurant in Mars Hill.

“It’s an exceptionally nice tasting fish compared to wild fish you might catch,” said Macek. “They’re bigger, better, and it probably costs less to eat our fish than to catch a wild trout.”

In the future, Macek said he hopes to expand and add another building “a little larger than this one,” and Pelkey said the Micmacs hope to eventually sell frozen or smoked fish products either in a can or reduced oxygen packaging.

“This is an opportunity for the tribe to interact with the general public,” Pelkey said, “to welcome them and provide some traditional Micmac hospitality.” 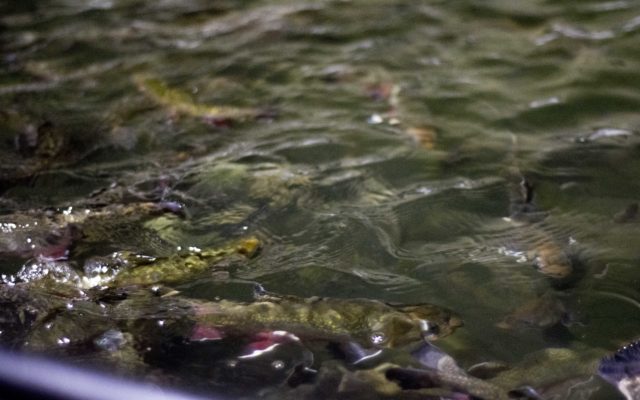 Thousands of trout swim in one of two racetrack shaped tanks at the Micmac Fish Farms land-based aquaculture facility in Caribou near the Presque Isle city line.
(Christopher Bouchard) 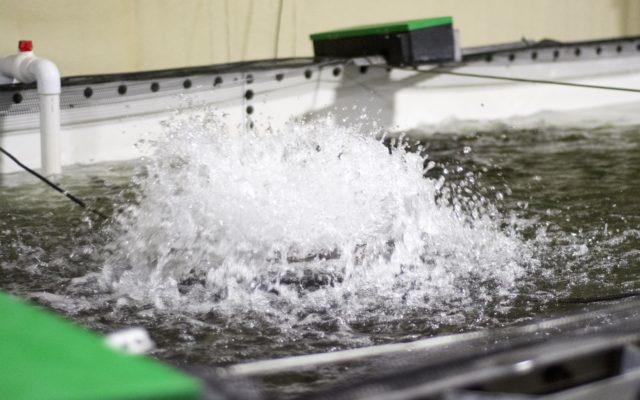