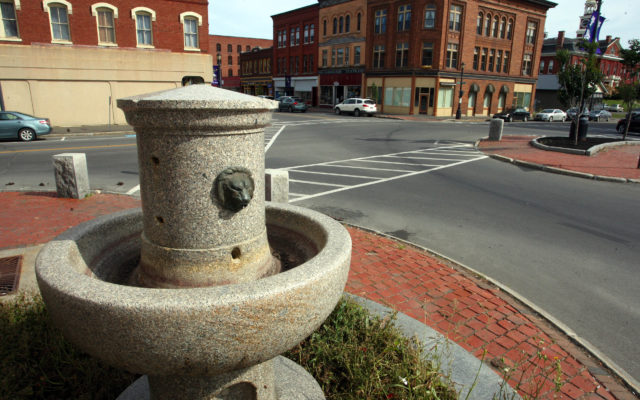 Jen Lynds • September 11, 2018
Throughout its history, Market Square has served as a community gathering place and center of economic commerce.

HOULTON, Maine — Throughout its history, Market Square has served as a community gathering place and center of economic commerce. Tucked away among the modern stores and historic placards, however, sits a piece of the past that is likely unrecognized by many.

Located at the corner of Water and Court streets, the Ensign Animal Fountain was given to the town in 1908. Jason Howe, a board member of the Aroostook Historical and Art Museum, said during a recent interview that he also was unaware of the history of the fountain until he uncovered it during research.

“I bet there are countless people who have driven by that and not even realized that it is a fountain,” he said. “Maybe that is because the water stopped flowing from it years ago.”

Currently, the fountain, which sits in front of the Mansur Block, is surrounded by flowers in a raised planter.  But according to Howe, the fountain came to town as a result of actions by Hermon Lee Ensign, a New York journalist, salesman, inventor, author and philanthropist who had a deep love for animals.  In 1897, Ensign founded the National Humane Alliance, a precursor to the Humane Society. Following his death, he left a large portion of his estate to the alliance.  Under the direction of Harrison Grey Fiske and his wife, leading stage actress and activist, Minnie Maddern Fiske, the alliance began offering animal drinking fountains to communities all over the country.  Houlton accepted and placed its fountain in the center of Market Square so it could be accessed by both horses and humans.

“There was even a bird bath section on top,” said Howe. “It is really neat how this was designed for all of these animals but could be used by humans, too.”

The fountain was quarried and made by Bodwell Granite Company of Vinalhaven, a company founded by former Gov. Joseph R. Bodwell. While many of the fountains were large structures, several smaller fountains, including the one given to Houlton, were created. Howe said that these structures are rare, with only an estimated 125 such fountains manufactured between 1904 and 1912.

“I am not sure when it was that the fountain stopped running,” he said. “I surmise it was likely when the fountain was moved to its current location. Also, all of the fountains used to have plaques on them designating the donation from the National Humane Alliance,  signifying that Mr. Ensign was the founder and the year they were made. The plaque on the Houlton fountain is missing, though, and I never determined what became of it.”

The fountain was still running as of 1919, according to a  photograph from The Aroostook Historical and Art Museum. There are about 70 fountains still publicly available, according to statistics from the National Register of Historic Places.

“I am not sure how many of these 70 fountains are the smaller type such as the one Houlton has,” said Howe. “But there can’t be that many.”

Howe said that right after the fountains were designed, they pretty much became obsolete.

“That was because motor vehicles became more popular,” said Howe. “The fountains weren’t really needed to give water to horses anymore because people stopped using horses to get around.”

According to the National Humane Alliance Fountain website, there are two other fountains in Maine — one in Portland and one in Vinalhaven.

“It is really neat to have this little piece of history here,” Howe said. 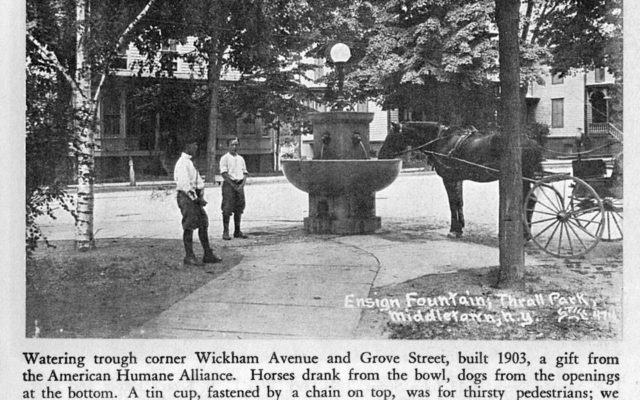 A horse drinks from an Ensign Animal Fountain in Middleton, N.Y. in this newspaper clipping. Hermon Lee Ensign, a New York journalist, salesman, inventor, author and philanthropist, founded the National Humane Alliance, a precursor to the Humane Society. After his death, the fountains started offering animal drinking fountains, or troughs, to communities all over the country. There are three in Maine, in Houlton, Vinalhaven and Portland. (NATIONAL HUMANE ALLIANCE) 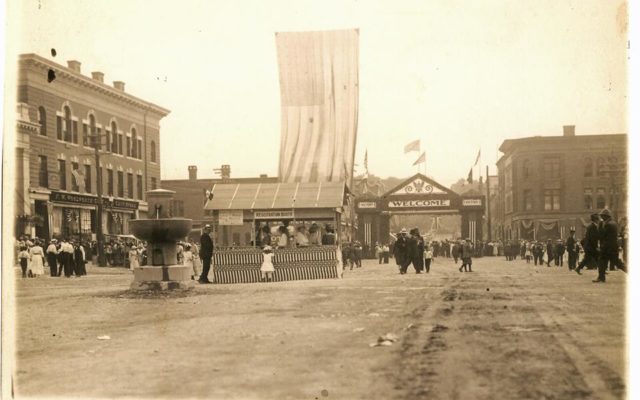 The Ensign Animal Fountain is pictured at the entrance to Market Square in Houlton on July 4, 1919. The fountain was a gift from the National Humane Alliance and stands as a symbol of the animal welfare movement of the late 19th- early 20th century. There are three located in the state, in Houlton, Portland and Vinalhaven. (AROOSTOOK HISTORICAL and ART MUSEUM)

Forbidden foods for our four-legged friends are many and can be very dangerous if ingested. Sometimes, we give our pets leftovers or what we consider treats. According to many sources, some human foods can make an animal very sick, and in certain cases can even be lethal.
What's Happening This Week END_OF_DOCUMENT_TOKEN_TO_BE_REPLACED