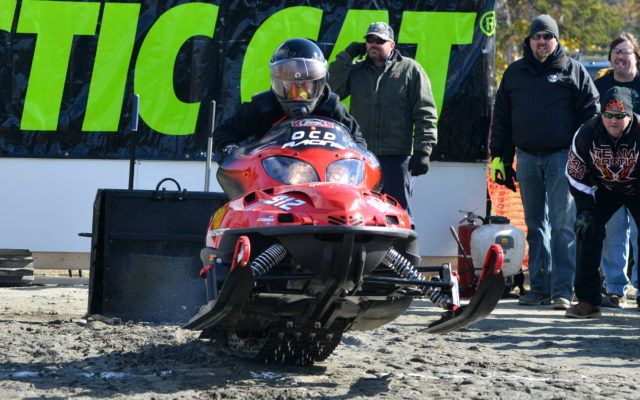 Kevin Sjoberg • October 15, 2018
Snowmobile grass drag races hadn’t been held in Ashland since 1995, but a pair of neighboring snowmobile clubs got together last spring to come up with a plan to change that.

ASHLAND, Maine — Snowmobile grass drag races hadn’t been held in Ashland since 1995, but a pair of neighboring snowmobile clubs got together last spring to come up with a plan to change that.

The result was Sunday’s Big Woods Grass Drags, held on the property of Barry and Glori Baranowski on Route 11 just south of Ashland.

“The area used to hold the Butch Jimmo Memorial Grass Drags several years ago, but it stopped and the Ashland Sno-Mobile Club and the Portage Lakers Snowmobile Club got together last spring to talk about reviving something similar,” said Beth Hunter, the marketing coordinator for the Big Woods Grass Drags, “and here we are.”

The track committee developed a 500-foot grass drag area, which included a 100-foot clay start and a 1,000-foot shutdown area, with two lanes for head-to-head racing.

Snowmobile enthusiasts were plentiful on Sunday as 24 divisions of racing were offered throughout the day. 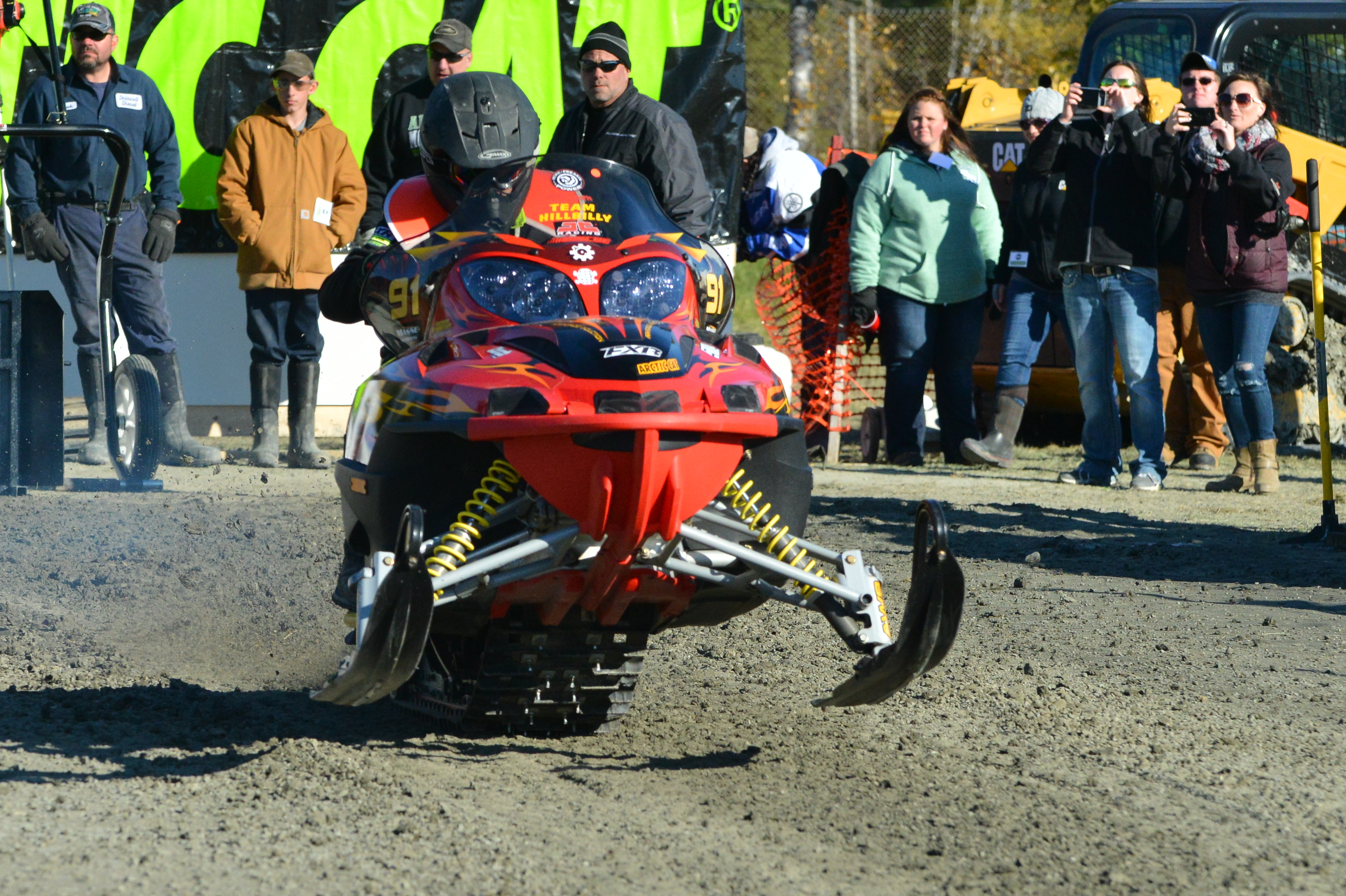 Thirteen-year-old Jesse Taggett of Woodland was one of the competitors in Sunday’s Big Woods Grass Drags held in Ashland. The snowmobile competition offered races in several different categories and drew a large crowd of spectators. (Courtesy of Jim Leighton)

One of those enthusiasts was Andy Pellerin of Pembroke, New Hampshire, who along with his crew brought a fleet of snowmobiles to an area he has come to enjoy to participate in something that has become a true passion.

“People that don’t know anything about it say, ‘Now wait, you are going to get up at 5 o’clock in the morning and drive 4-1/2 hours with no breakfast to race snowmobiles on the dirt … you realize no part of that makes sense,’” said Pellerin, who had previously been in Aroostook County competing in Caribou two winters ago. “But when you put it all together, it does.”

Pellerin said he has been involved in racing his whole life. He no longer competes himself, but his two youngest children do and have enjoyed plenty of success on the track at venues throughout the Northeast.

His best friend, Jim Hamel, who also made the trip to Ashland, got the family interested in racing snowmobiles on the grass and the ice a few years ago and they built a 500-foot track to start on “and both kids were winning right out of the gate,” according to Pellerin.

His daughter, Madison, had a work commitment and was unable to make the trip north, but his son Andrew did and had a busy day of competition while driving five different sleds.

“We can’t race anymore, but we put them together for them,” the elder Pellerin said. “I’ve never been gratified as much as I am watching my children compete. Not just to have them win but to turn into decent human beings and competitors. To me that’s the mark of a man’s wealth.

“This day and age when kids are glued to their cell phones and iPads, this gets us out and keeps us going,” he added.

Kurt Dumond grew up in Van Buren but moved to Sanford several years ago. He organized local grass and ice drag events while working at a Caribou snowmobile dealership and has been involved in the industry his entire life. When he learned of the Big Woods Grass Drags, he made it a point to come up to support it. 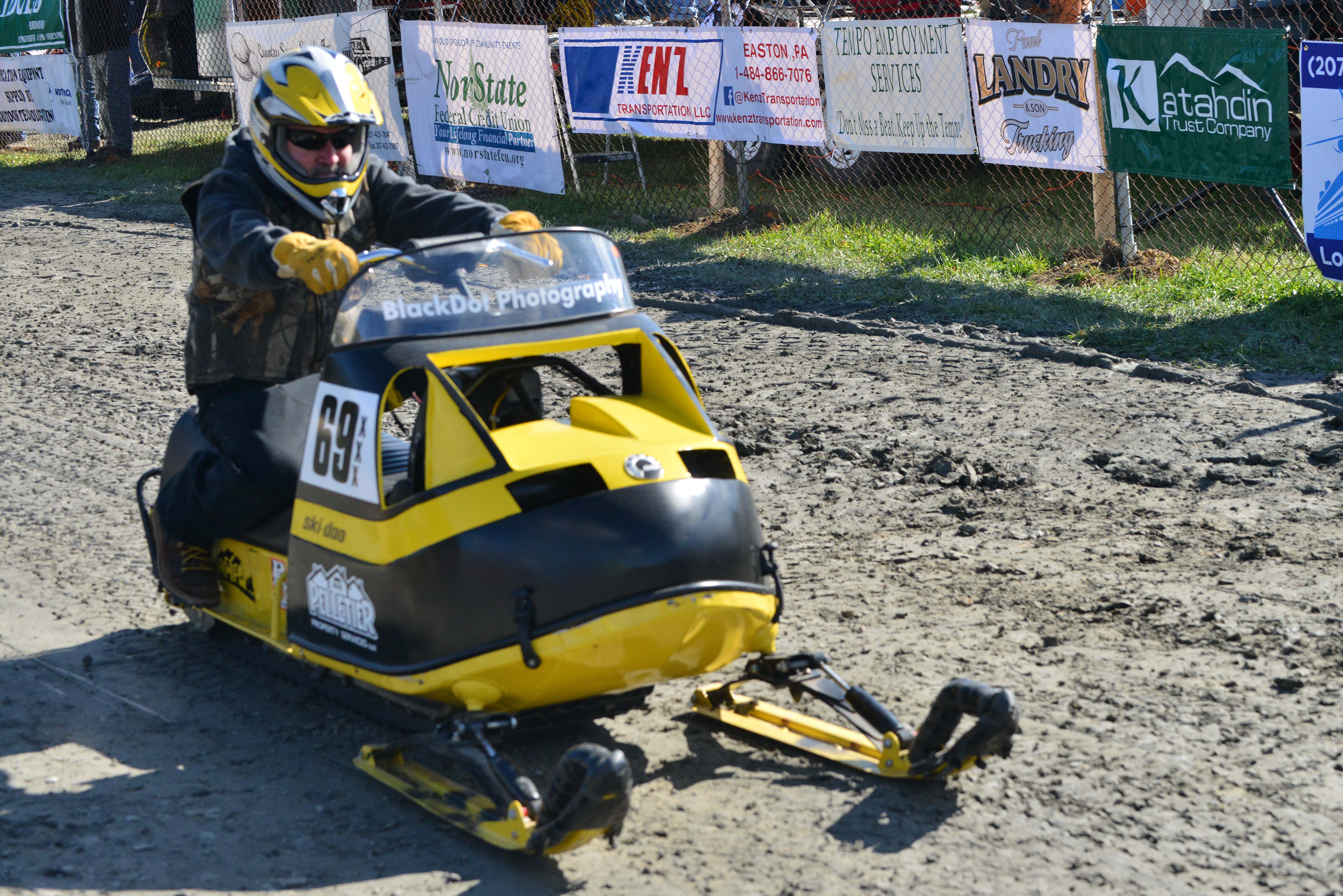 Kevin Pelletier races his snowmobile down the 500-foot track during the Big Woods Grass Drags in Ashland Sunday. (Courtesy of Jim Leighton)

“This is a great facility for the first time out and they’ve done a good job,” Dumond said. “The success of events like this really comes down to the volunteers and coming up with a plan and executing it. Hopefully it will keep going.”

Jesse Taggett, a 13-year-old from Woodland, won his division at a competition in Epping, New Hampshire, the previous weekend. It was the first time he had ever competed on grass and was back at it Sunday.

“I love riding sleds and going down the track,” Taggett said, “and it’s fun working on the sleds and getting to know them.”

Mark Clark of Ashland owns snowmobiles that once belonged to Joey Clark and Adam Michalka, young local snowmobile racing enthusiasts who passed away in 2013 and 2014, respectively. Mark Clark had the sleds in storage and took them out a month ago to prepare Sunday.

“When I parked them, I never thought I’d use them again,” he said. “I guess I was a liar.”

Memorial shootouts were held in their honor Sunday as a featured part of the event, with a $1,000 purse up for grabs for each. The 57-year-old was excited to be able to race their sleds again.

“Joey was my cousin and Adam was like a son to us,” Mark Clark said. “They were always with me, tinkering with the sleds, and it’s great to be out here in their memory.”

Vintage sleds were on display throughout the day and several local vendors had booths set up to cater to racers and spectators.