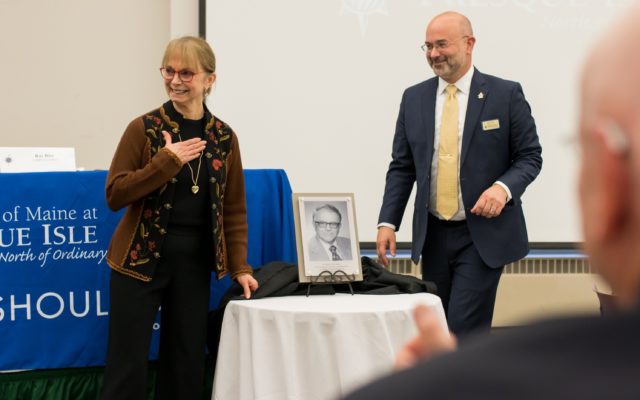 Melissa Lizotte • October 24, 2018
A Presque Isle native has provided a major donation to the University of Maine at Presque Isle that will help grow their new agricultural science and agribusiness program, create a permanent faculty position and support workforce needs in Aroostook County.

PRESQUE ISLE, Maine — A Presque Isle native has provided a major donation to the University of Maine at Presque Isle that will help grow their new agricultural science and agribusiness program, create a permanent faculty position and support workforce needs in Aroostook County.

UMPI officials announced on Tuesday, Oct. 23, that Mary Barton Akeley Smith, who now lives in California, has donated $1 million to the agriculture program in honor of her late father, Dr. Robert Vinton Akeley. Her gift establishes the university’s first-ever endowed faculty chair, a permanent position that will ensure the hire of an associate-level agricultural professor and researcher and be known as the Dr. Robert Vinton Akeley Chair of Agricultural Science and Agribusiness.

The funds from Smith will support the initial salary and benefits for the faculty chair and go toward expenses related to the first four years of the academic program, such as for greenhouse and lab equipment as well as a research fellowship for UMPI students. During an official announcement at the university’s campus center, President Ray Rice noted that Smith’s donation is the largest one-time gift that UMPI has ever received and the first time that the university has been able to establish an endowed faculty position.

“I like to say that this program has been 100 years in the making because Aroostook County has a rich agricultural history, but now UMPI has full capacity to give students the education they need to succeed in agricultural careers, whether on their family farms or in agribusiness organizations,” Rice said.

The University of Maine System Board of Trustees officially approved UMPI’s bachelor of science in agricultural science and agribusiness program in September and classes started this fall with eight first-year students and many students who are already part of the university’s sustainable agriculture concentration, which is part of the environmental science program. The university also recently started offering a minor in sustainable agriculture. 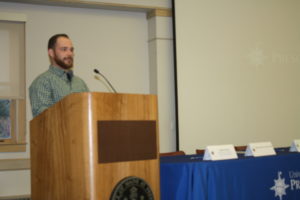 Jason Johnston, dean of UMPI’s college of arts and sciences and associate professor of wildlife ecology, said that after establishing the concentration, the science faculty met and formed partnerships with local farmers and agribusiness leaders to develop courses and research work in both traditional and organic farming techniques. Students will conduct much of their research in the new 2,400-square-foot greenhouse that will break ground this spring.

“In Aroostook County, there are vast opportunities to develop new crops that service this region and the country and it’s only natural that UMPI plays a collaborative role in the field,” Johnston said.

UMPI senior and St. Agatha native Cody Theriault has taken advantage of the sustainable agriculture courses that the campus has offered thus far and stated that the program has allowed him to participate in research projects that will aid in his future agricultural work alongside his father and grandfather.

During the hourlong ceremony on Tuesday, UMPI officials unveiled and presented to Smith a commemorative plaque and chair in honor of Akeley that will be displayed in the office of the faculty chair.

Akeley grew up on a potato farm in Presque Isle and was known internationally as a potato breeder who helped introduce 40 new potato varieties and wrote over 100 publications on potato breeding. He first joined the Federal Program of Potato Investigations as a student helper at age 22. He earned his bachelor’s degree in agronomy in 1937 and his master’s degree in botany in 1942, both from the University of Maine.

For more than a decade, Akeley ran the potato breeding program at the Aroostook Farm in Presque Isle before becoming the leader of the National Potato Breeding Program in Maryland in 1956 and then the leader of potato investigations in 1960. Smith said that her gift to UMPI’s agricultural program is especially poignant since her father dedicated his life to potato farming and drew upon his family’s agricultural heritage in Aroostook County.

“My father has deep roots in Aroostook County and was a third-generation farmer,” Smith said. “With this donation I wanted to support the immediate needs of UMPI’s agricultural program and the region that he loved.”

It was a freezing day across The County, but you could hardly tell from the turnout. Even after a massive surge in absentee ballot requests across the Central Aroostook area, droves of people came out to vote in Presque Isle, Mapleton, Washburn and Fort Fairfield.
Pets END_OF_DOCUMENT_TOKEN_TO_BE_REPLACED