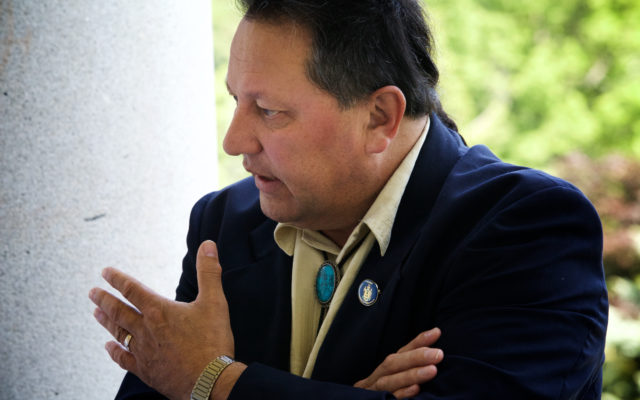 Joseph Cyr • November 27, 2018
Following last week’s decision by Maine’s top court to not take a stand on the constitutionality of tribal gambling, the Houlton Band of Maliseet Indians is now mulling its next steps to bring a casino to Houlton.

HOULTON, Maine — Following last week’s decision by Maine’s top court to not take a stand on the constitutionality of tribal gambling, the Houlton Band of Maliseet Indians is now mulling its next steps to bring a casino to Houlton.

HBMI Tribal Chief Clarissa Sabattis also stated Sunday, Nov. 25, in an email response that the tribe would no longer send a tribal representative to the Maine State Legislature in Augusta.

“Efforts to gain local, state support for our legitimate, but modest, tribal economic development plans was never legally required under current international, treaty, federal or state law,” tribal Rep. Henry Bear of the Houlton Band of Maliseets said in response to the brief opinion released last week by the justices of the Maine Supreme Judicial Court.

Rather Bear said that tribal “information and education efforts [were] undertaken out of courtesy toward those who are seemingly unknowing of the law and now find themselves among us as our neighbors as we pursue our modern-day goals of self determination and economic self sufficiency.”

For years, the Houlton Band of Maliseet Indians has tried to create a multi-million dollar casino in the Houlton area that would bring with it nearly 100 jobs. Back in 2013, the tribe’s strategic economic plan, called for the development of a casino and in 2014, the tribal council adopted a gaming resolution legally authorizing a casino on tribal lands along U.S. Route 1 in Houlton, near the area of Family Dollar.

The Maine House of Representatives this fall passed an order by Rep. Bear asking the Maine Supreme Judicial Court to decide whether a U.S. Supreme Court decision in a California case would allow the Maliseets to conduct gambling on tribal trust land without state permission.

In their brief opinion Tuesday, Nov. 20, the state high court justices said they don’t consider the issue “of a serious and immediate nature.” Without dissent, the justices said in their response that the Maine House failed to file a brief explaining why the court should weigh in.

Under the Maine Constitution, the governor, House or Senate can ask the Maine Supreme Judicial Court justices to “give their opinion upon important questions of law, and upon solemn occasions.”

Tribal Chief Sabattis did not immediately share any additional comments about the justices’ decision other than to state that the tribe would no longer send a tribal representative to the Maine State Legislature. But it appears the tribe is not giving up on the idea of developing a casino in The County.

Rep. Bear has been at the forefront of attempts at tribal gaming for years — all of which have failed either at the ballot box or in the Legislature.

A non-voting member of the Legislature, Bear most recently argued that a 1987 U.S. Supreme Court ruling in California v. Cabazon Band of Mission Indians gives tribes the authority to operate casinos if the states where their reservations are located allow casinos.

A 1988 federal law allows states to set rules for gambling. Numerous legislative attempts at granting gaming facilities to tribes have been defeated in recent years, with arguments against them usually centering around the fact that despite there being two privately run casinos here, Maine does not have a comprehensive gaming strategy or rules for their development.

Bear previously has said that gambling revenue could help Maine’s tribes on a range of public health and infrastructure issues. He also said a casino would benefit Aroostook County’s economy.

“In the past six years the Tribe has lost a projected $100,000,000 in net tribal casino revenues and a hundred, much needed jobs as a result of this ongoing, jurisdictional situation,” Bear said. “State gaming studies confirm a Tribal Casino in Aroostook County does not impact Oxford and barely (3 percent) impacts Bangor’s Hollywood Casino. The only ones pleased by this behavior are the out-of-state-owned casinos and their teams of lawyers and lobbyists at the state capital.”

The tribe will now pursue a resolution through negotiations or litigation, Bear said.
“Based on an increased awareness of the tribe’s circumstances and the state’s dubious legal position, there was majority support for the question propounded to the Maine Supreme Judicial Court and there remains strong support among Maine legislators for the idea of a tribal casino in our Aroostook region,” he said. “Going forward there is expected to still be tribal gaming efforts even without our presence in the Maine Legislature.

“The Maliseet people, whom I represented fully, support these goals of asserting our tribe’s historical, legal and treaty-based rights, including our international, legal right to self determination and economic self sufficiency by way of a modern-day version of tribal gaming in our own tribal homeland (along) the St John River watershed, just as a majority of our other, nearby Maliseet Indian Bands currently do as a matter of treaty-based, legal right,” Bear added.

The Associated Press contributed to this report.

Most of us have had just about enough of hearing about COVID-19 and the different variants that are popping up, but unfortunately, this pesky virus is still around.  It’s important to know a few warning signs and tips if you think you or your furry family members are affected with this illness.
What's Happening This Week END_OF_DOCUMENT_TOKEN_TO_BE_REPLACED