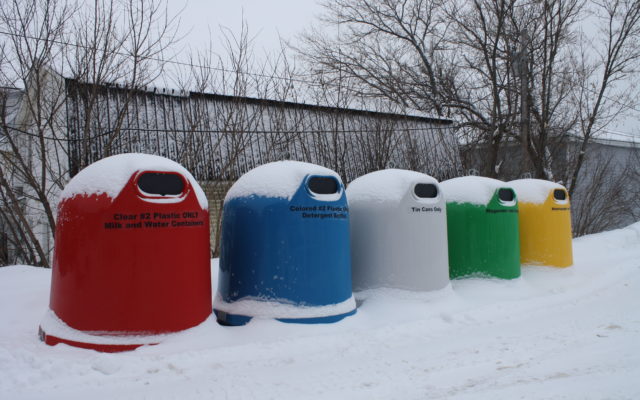 In 2018, those communities agreed to combine the Presque Isle Landfill and Tri-Community Landfill into one entity known as Aroostook Waste Solutions. As part of the merger, Presque Isle has implemented a new igloo recycling system that replaces curbside collection of recyclables using blue bags.

The brightly-colored igloos have been placed at the following locations: the Presque Isle City Hall parking lot, near the Presque Isle Courthouse on Riverside Drive, the Presque Isle Landfill, the Mapleton Town Office and the Washburn Town Office. Each igloo has a different color and a label that specifies what materials residents are allowed to recycle in that particular bin.

Red igloos are approved for recycling only clear plastic containers with the No. 2 recycling symbol such as milk and water jugs while the blue igloos can only accept colored plastic containers such as detergent, dish liquid, bleach, shampoo, oil containers and light block white milk containers. Residents are encouraged to remove bottle caps, rinse the containers clean and crush them before recycling to save space in the igloos.

Yellow igloos must only contain newspapers, telephone books and newspaper inserts, while the green igloos are reserved for magazines and catalogs, and gray igloos for tin and steel cans, according to Mark Draper, solid waste director for Aroostook Waste Solutions. As of Jan. 1, 2019, the Presque Isle Recycling Center, formerly located on Missile Street, has ceased operations. There is no fee to use any of the igloos for recyclable materials and the service is available 24/7.

Draper anticipated that additional dumpsters, specifically for cardboard, would be placed next to the igloos at each location within days.

“We encourage folks not to try to recycle any materials that don’t belong in a specific igloo or to put cardboard anywhere except the specificized dumpster,” Draper said. “Putting the wrong materials in an igloo only creates more work for our employees and adds to the overall cost, because we have to dig out the stuff by hand and dispose of it ourselves.”

The changes in recycling are largely due to increased costs and decreased revenue in the operation of recycling programs for municipalities across the state and country, said Draper. In 2017, China, the world’s largest importer of waste, announced that the country would no longer import 24 types of waste from the United States, Europe and other countries beginning in 2018 in an effort to enforce limits on accepting waste contaminated with non recyclable materials.

According to a recent Bangor Daily News article, many municipalities throughout southern Maine have been forced to either reduce or eliminate their own recycling programs in order to combat increased prices in waste management services as a direct result of China’s decision.

Reducing costs became a major motivation during discussions between municipal officials on how to merge the Presque Isle operation with the Tri-Community Landfill, located in Fort Fairfield, into an entity that multiple communities in Aroostook County could use.

Previously, residents of Presque Isle had to pay a fee of $3.45 for every bag of garbage they brought into the city landfill. Aroostook Waste Solutions has now replaced those fees with decal permits that are required for folks to enter either the Presque Isle Landfill, located on 202 Lathrop Road, or the Tri-Community Landfill, located on 303 Murphy Road in Fort Fairfield.

“We’re hoping that without the fees required per bag we can reduce the amount of traffic and wait time for people who use the landfills,” Draper said.

Decals for the Presque Isle Landfill cost $200 per year for city residents and businesses or $225 annually for residents of surrounding communities whose waste management is contracted under Aroostook Waste Solutions. Those communities are Mapleton, Chapman, Castle Hill, Perham, Wade and Washburn. The decals are available at the Presque Isle City Hall or the Mapleton Town Office.

To enter the Tri-Community Landfill, residents of Fort Fairfield, Caribou and Limestone must pay $20 each per year decal permits while businesses of those communities must pay $50. Residents of the aforementioned contracted communities must pay $25 each. Both landfills charge additional fees for the disposal of any items beyond weekly household garbage, the rates for which are available on the Aroostook Waste Solutions website.

The difference in prices for permits at the landfills, according to Draper, is that town officials in Caribou, Limestone and Fort Fairfield opted to cover their portion of the fees to operate the Tri-Community Landfill through property tax dollars, whereas Presque Isle chose to cover their operational costs for the city’s landfill through the permit fees without using any taxpayer subsidies.

Presque Isle City Manager Martin Puckett noted that, in addition, the communities who contract with Aroostook Waste Solutions will no longer have to pay their portion of the $6.5 million cost to expand the Presque Isle Landfill in 2010.

“Those municipalities told us that, if this merger were to happen, they did not want the cost of waste management to be part of their municipal budgets and preferred instead to enact the decal permits and additional fees for the landfill,” Puckett said.

Draper added that folks who already receive curbside garbage pickup services from either Gil’s Sanitation or Star City Sanitation, both based in Presque Isle, will not see any changes in regards to services offered or pricing. He recommends that senior citizens or other people who do not have much waste to dispose of contact either company to ask about rates.

As Aroostook County faces a declining population, Draper and Puckett hope that Aroostook Waste Solutions becomes one of many ways in which municipalities collaborate and share resources in order to reduce long-term expenses and reliance on taxpayer dollars.

“Basically, this tri-community landfill system is an effort to provide more effective services to municipalities while reducing the overall cost for everyone,” Draper said.

Forbidden foods for our four-legged friends are many and can be very dangerous if ingested. Sometimes, we give our pets leftovers or what we consider treats. According to many sources, some human foods can make an animal very sick, and in certain cases can even be lethal.
What's Happening This Week END_OF_DOCUMENT_TOKEN_TO_BE_REPLACED