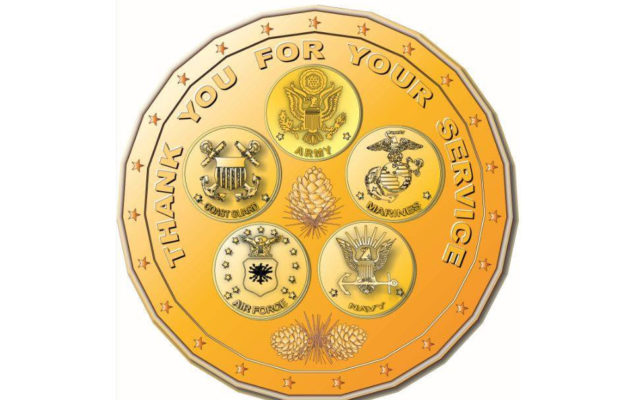 Contributed • January 27, 2019
The Maine Bureau of Veterans’ Services (MBVS) announces the final design selection for the new State of Maine Honorable Service Coin and Plaque, which will honor all Maine veterans, past and present, regardless of their branch or era of service.

AUGUSTA, Maine — The Maine Bureau of Veterans’ Services (MBVS) announces the final design selection for the new State of Maine Honorable Service Coin and Plaque, which will honor all Maine veterans, past and present, regardless of their branch or era of service.

U.S. military members have a longstanding tradition of carrying special “challenge coins” to symbolize branch and unit identity and foster esprit de corps. In 2002, the Maine Bureau of Veterans’ Services commissioned the first of four bronze plaques that now hang in the Hall of Flags at the Maine State Capitol, each representing veterans who served in World War II, Korea and Vietnam, as well as women veterans. Likenesses of each of the four plaques were made into coins that are regularly presented to Maine veterans based on their era of service.

As many other Maine veterans have served during peacetime and in conflicts other than World War II, Korea, and Vietnam, the Honorable Service Coin was commissioned to honor those veterans who would otherwise not be eligible to receive one of the four previously existing coins. A matching plaque will also be hung in the Hall of Flags at the State House in Augusta.

“The creativity, artistic talent, patriotism and compassion for our veterans was evident in all of the submitted designs, but ultimately, only one could be chosen,” said David Richmond, acting director of the Maine Bureau of Veterans’ Services. “On behalf of the Artist Selection Committee and the state of Maine, I extend my congratulations to Ms. Georgette Kanach and thank all of the artists for lending their time and talent to honoring our veterans.”

Kanach is the mother of two veteran daughters; grandmother to two veteran grandchildren; sister to four veteran brothers; and aunt to many nieces and nephews who have served and who are serving in the military. She said her greatest honor would be to one day present each of her daughters with an Honorable Service Coin.

A formal unveiling ceremony for the Honorable Service Coin and Plaque will be announced.

June is generally a month that also marks the height of “kitten season,” when large litters of kittens are born and often end up in animal shelters.   Luckily, here at the Central Aroostook Humane Society, we have seen a dramatic drop in the cat population over the past five years, mostly due to our spay and neuter program.
What's Happening This Week END_OF_DOCUMENT_TOKEN_TO_BE_REPLACED