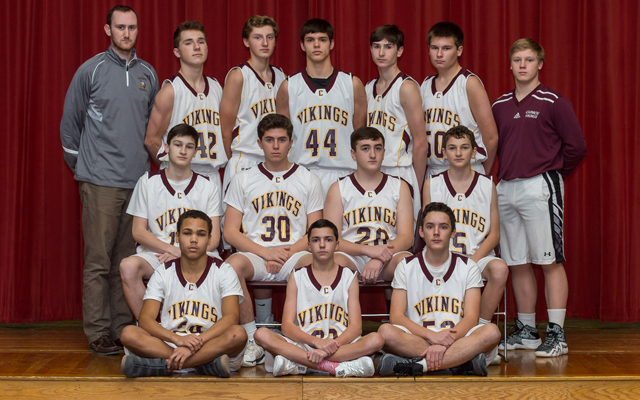 Kevin Sjoberg • March 8, 2019
The Vikings varsity boys basketball team, coming off its Class B state championship, wasn’t the only one at the school enjoying a special season.

CARIBOU, Maine — The Vikings varsity boys basketball team, coming off its Class B state championship, wasn’t the only one at the school enjoying a special season.

The junior varsity boys went undefeated with a 25-0 record.

“I started the season knowing that I had a special team,” said coach Cody Herbert. “I had a handful of guys that could probably get minutes on most varsity teams in our conference. We had a good problem though, in that our varsity team was so deep this year that this handful of guys was forced to play another year on JVs.

“In order for my guys to develop, it made sense to keep them playing together and to make sure they got major minutes, rather than buried in the deep varsity rotation,” he said.

The Caribou JV team featured a roster made up of 11 sophomores and two freshmen, and Herbert said he felt a strong chemistry early on.

“The guys just enjoyed being around each other and I think everyone felt a part of every win, whether they were a starter, the sixth man, or the last player off the bench,” he said.

Six different players led the team in scoring at one time or another. The Vikings won many of their games in comfortable fashion, but were challenged on a few occasions, including during four-point wins at Mount Desert Island and Ellsworth, and a close contest against the Presque Isle JV II squad. At home against rival PI on the final day of the regular season, Caribou pulled out a two-point win despite trailing in the late stages.

The Vikings then played in a tournament in Caribou, topping Fort Kent and Fort Fairfield before prevailing in a rematch against Presque Isle to win the title.

“The players on this team have encouraged the next wave of Vikings that being a member of the JV team means a lot more than previously thought,” Herbert said. “Kids now want to come up and develop and play JV so that one day they can be a part of a varsity run at the gold ball, like this year’s team.”

Matt Smith and Cody Waldemarson provided valuable big man minutes when Espling was out. Cam Ouellette and Miles Collier were usually the first two players off the bench at the guard position, providing ball handling and accurate shooting in many instances.

Jeremy Bolen, Bryan Phillips, Ari Plante and Ryan Austin were the team’s younger and less experienced players, but they worked hard in practice and pushed the others to get better every day in practice.