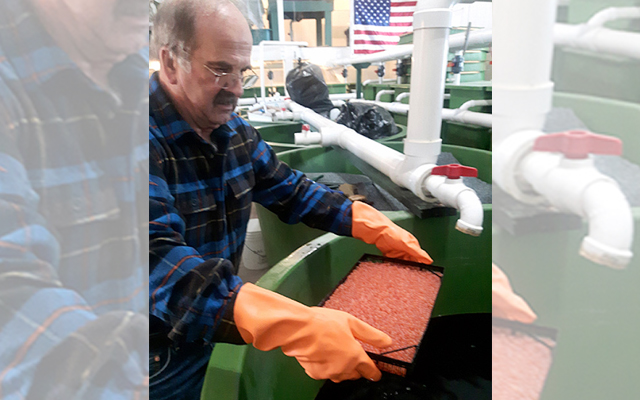 The eggs will be hatched to the unfed fry stage at the facility and stocked into an Aroostook River tributary. The fry introduction will add to the millions of salmon the group has released to the Aroostook River over the past 20 years.

Last year, according to ASNM officials, the effort resulted in the Aroostook’s becoming the number-three river in salmon returns in all of Maine.

In a press statement, ASNM said the Aroostook system is the largest St. John River tributary that is accessible to sea-run Atlantic salmon. Together with its twin river, the Tobique, the drainage area is as great as that of the Miramichi River system, and therefore has the capacity to produce as many salmon.

The egg transfer marks a re-commencement of an agreement whereby the Canadian Department of Fisheries and Oceans would supply eggs to support the recolonization of the huge Aroostook drainage with salmon. The agreement was suspended three years ago, when DFO rearranged priorities at the Mactaquac Biodiversity Facility near Fredericton.

Brian Fields, president of ASNM, was ecstatic about the program’s re-commencement.

“This is the boost that we need to re-establish a sustainable wild Atlantic salmon population in the river.  It is the result of excellent cooperation between many U.S. government, Canadian government, First Nations’, and Canada, U.S. and international NGOs.”

John Pugh, president of the NB Salmon Council, said “Our organization supported the initiative because it will eventually produce fisheries benefits for members of our affiliated organizations, one of which is Atlantic Salmon for Northern Maine.

“Being an international river, the St. John needs an international effort to re-establish its formerly productive salmon population,” Pugh said. “We hope that the effort continues until the Aroostook becomes self-sustaining.”

Gubernatorial candidate John Glowa said that he wants to spur government reform that truly creates a system of, by and for the people when he visited Presque Isle City Hall.
Pets END_OF_DOCUMENT_TOKEN_TO_BE_REPLACED

Many of you have been asking about our super popular “Toast to the Animals” celebration. After several COVID-19 cancellations and not being able to host this great fundraiser, we are finally ready to celebrate the animals once again and help support the Central Aroostook Humane Society.
What's Happening This Week END_OF_DOCUMENT_TOKEN_TO_BE_REPLACED