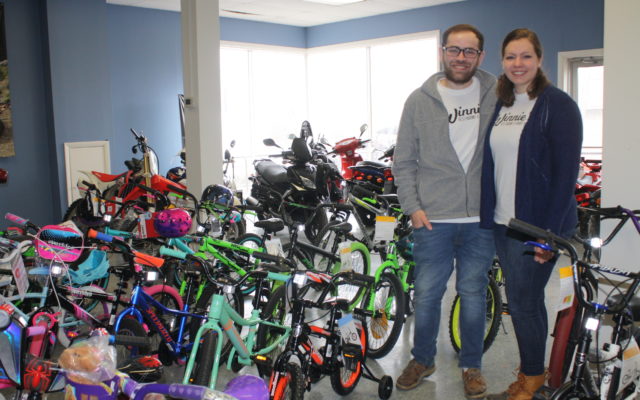 Melissa Lizotte • April 18, 2019
All Dustin Mancos wanted was to give away two bikes to a local boy and girl who otherwise might not experience the thrill of gliding down the neighborhood on their first bicycle.

PRESQUE ISLE, Maine — All Dustin Mancos wanted was to give away two bikes to a local boy and girl who otherwise might not experience the thrill of gliding down the neighborhood on their first bicycle.

More than a week after posting about his 2nd annual special Easter bike giveaway on the Facebook page of Winnie’s Restaurant & Dairy Bar, which he owns, Mancos received around 45 donated bikes and helmets from area businesses and families to give away to children in need.

“I’ve seen people come in for lunch with a bike in their hand,” Mancos said. “It’s gotten a tremendous response from the community that I never expected.”

On April 7, Mancos wrote about his planned giveaway of the initial two bikes on Facebook, asking people to like and share the post and tell him the name, gender, age and hometown of a child who they believe is deserving of a bicycle. He promised that if the post received 500 likes, he would give away the bikes on Easter morning.

One week later, Mancos found a handwritten note on his desk from Kirk Carroll, owner of Carroll’s Auto Sales in Presque Isle. Carroll expressed his desire to help more local children and later donated two bicycles on behalf of the company. Within a matter of days more businesses, including Pat’s Pizza; Bike, Board & Ski; Harry’s Motor Sports; Griffeth Ford Lincoln; and Percy’s Auto Sales; and local families stepped up to donate dozens of bikes.

Mancos’ initial post about the bike giveaway has received more than 600 likes, 268 shares and 236 comments from people across Aroostook County, Maine and even outside the state, who have either shared a child’s story or purchased and donated bikes of their own. So far, Mancos’ subsequent posts about the giveaway have reached more than 70,000 people. He has also received private messages from local and statewide agencies who work with children in foster care or similar settings.

Winnie’s employee Haley Perron said that her parents used Walmart’s online “ship to store” feature to send a bicycle to the Presque Isle store from their home in Connecticut. Folks from southern Maine have reached out to Mancos stating their plans to purchase and send up bikes or donate money so that he can purchase more bicycles locally. Mancos received $400 and used the donations to buy more bikes, increasing the total amount to 54.

As someone who was raised by a single mother, Mancos said he knows firsthand the financial struggles that many families go through to support their children. He remembers winning his first bicycle through a giveaway at the former Loring Air Force Base in Limestone one Easter and wants other children to have a similar experience.

“It was really hard for us to make ends meet when I was growing up,” Mancos said. “With this giveaway, I’m looking for stories that hit home the most for me.”

Throughout the weekend, Mancos selected all bicycle recipients and made arrangements with parents, guardians or others who have shared the children’s stories to pick up the bicycles. The donated bicycles accumulated so quickly that he stored most of them at the former Nappa Auto Parts building on Main Street in Presque Isle, thanks to the generosity of the building’s owner, John Alexander, who operates Harry’s Motor Sports next door.

Perron said that Mancos’ kind-heartedness is not uncommon and that she isn’t surprised that so many people have supported his endeavors.

“There have been many times when he’s paid for the person behind him at Dunkin Donuts and he’s brought an ice cream freezer to Leisure Village so that the residents there can have free ice cream,” Perron said. “He’s one of those people who’s always doing something for somebody else but never looks for any recognition.”

For Mancos, the bike giveaway was never about him, but rather passing along great experiences to children.

“I didn’t do this to make myself look good or to get more business. I just wanted to give a boy and a girl bikes for Easter,” Mancos said. “It’s great that this has inspired people to be unselfish toward others.”

A familiar face to Aroostook County residents has announced her candidacy for the Maine State Senate.
Pets END_OF_DOCUMENT_TOKEN_TO_BE_REPLACED

One addition to last week’s “Kindness abounds” story on the generosity of local area youth: Just last week, 11-year-old Michaela stopped by the shelter armed with bags of dog and cat food and special treats.
What's Happening This Week END_OF_DOCUMENT_TOKEN_TO_BE_REPLACED