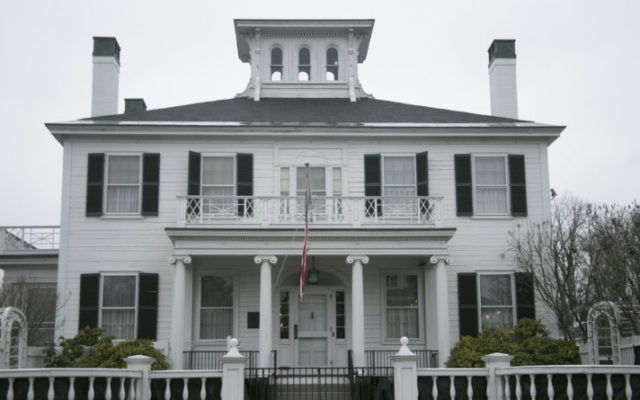 Michael Shepherd • April 22, 2019
Overflow rooms were filled Monday at the State House complex as Mainers took turns providing testimony on Democrats’ biggest gun control push of the 2019 session — a revived “red flag” bill fought by gun-rights groups that still may have a compromise waiting in the wings.

Overflow rooms were filled Monday at the State House complex as Mainers took turns providing testimony on Democrats’ biggest gun control push of the 2019 session — a revived “red flag” bill fought by gun-rights groups that still may have a compromise waiting in the wings.

The bill from Sen. Rebecca Millett, D-Cape Elizabeth, would make Maine the 15th state to allow courts to order a person deemed dangerous to temporarily surrender guns. Another version initially passed the Legislature last year, but it was vetoed by then-Gov. Paul LePage despite the sign-off of the Sportsman’s Alliance of Maine and National Rifle Association.

Gov. Janet Mills, a Democrat who was the attorney general then, helped negotiate the 2018 deal that brought those gun-rights groups on, but they’re opposing this year’s push for now in the Democratic-controlled Legislature.

The sticking points for gun-rights groups include provisions requiring a search warrant and a hearing where only one party could be present. The bill is backed by Everytown for Gun Safety, the engineer of the unsuccessful 2016 referendum to expand background checks in Maine. A 2018 study focused on Connecticut and Indiana found evidence that red flag laws decrease suicide rates. The sportsman’s alliance and NRA are also making pushes against it.

On Monday, Millett on Monday said her bill will “balance personal rights with public safety” by providing a “vital tool to loved ones and law enforcement to prevent homicides, suicides and mass murders.”

But former state Sen. Eric Brakey, R-Auburn, who led a rally of opponents before the public hearing Monday morning, said Millett’s bill “suffers from low standards of evidence” and a “lack of due process, adding that some could be “deprived of their natural right to self defense.” Dozens of opponents testified at the State House on Monday, as is normal with gun bills.

Under Millett’s bill, facts would have to be provided by a petitioner in a sworn affidavit and reviewed by a judge, who then would decide to confiscate one’s guns only if there is “clear and convincing evidence” of harm, Millett said. Lying or providing false testimony in an affidavit under this bill would be a Class C crime punishable by up to a year in jail.

But David Trahan, the executive director of the sportsman’s alliance, said provisions in Millett’s bill that would require judges to issue search warrants to serve an order and could allow judges to have hearings where only one party is present are non-starters for his group.

The Mills-backed version from last year would have allowed orders for certain people in mental health treatment. While Millett recently circulated an amendment that would move the bill closer to that version, it retains the original language that gun-rights groups see as onerous.

Trahan has said his group sees the Mills version as a “starting point” that his group would support and he said the new governor’s administration has been “terrific to work with” on this issue, saying he thinks there is broad agreement that the search warrant requirement could be unconstitutional.

“Our organization has always stayed at the table with the administration and whoever wants to talk about this bill,” he said before the hearing.

There’s a long way to go before seeing whether this year’s bill is viable or not. Democrats have the votes in the Maine Legislature to pass a version without Republican support. Even last year’s version of the red flag got a mostly party-line vote in the House of Representatives. Mills may be a moderating force here, so the bill may change before the Legislature sees it.

There are also other gun proposals on the docket in 2019, including another one that was up for a hearing on Monday that would allow cities and towns or other political entities to ban guns at municipal offices and polling places facing similar opposition from gun-rights advocates.

Though Millett’s “red flag” bill is expected to draw a crowd this morning at the State House complex, it’s not the only heavy-hitting proposal being vetted today. In addition to the Judiciary Committee this morning (listen here), four other legislative committees weigh in on a range of bills, including one to expand MaineCare support services to certain adults with mental illness, a group of bills to make Maine’s pension system more equitable, and proposals to increase the annual salaries for lawmakers and the governor.

The labor committee could vote on a bill from Sen. Bill Diamond, D-Windham, giving crime analysts the same pension access as 1,300 public safety employees. This would apply to roughly 20 civilian employees of the Maine State Police’s crime lab and those who investigate child pornography. Discussion of the bill begins at 1 p.m. Listen here.

The education committee will hear testimony on a variety of behavioral and curriculum bills, including one to require the state provide 55 percent of essential programs and services funding, another that would repeal proficiency-based diploma standards, one mandating classroom curriculum include instruction about the Holocaust, and another from Millett that would mandate investigation of certain types of violent behavior in the classroom. Listen here.

— Central Maine Power and a union agreed on a deal that will add workers. The plan calls for the minimum number of union employees at CMP to increase from 546 to 606, including 12 new line apprentices and four new station apprentices. Workers will be added incrementally, with a goal of having a minimum of 665 workers by 2024.

— Someone stole students’ medications from a Maine elementary school. Police in Rockland believe the break-in at South School occurred Saturday morning. A preliminary investigation indicates that medications stored in the nurse’s office during school vacation were the only items taken. This is the second time that the South School has been broken into and student medications stolen, according to Regional School Unit 13 Superintendent John MacDonald. A similar incident occurred two years ago.

— The president blasted some of his aides for comments they made in the Mueller report. In a series of Sunday tweets, President Donald Trump lit into current and former staffers who under oath, had shared with special counsel Robert Mueller their accounts of how Trump tried numerous times to squash or influence the investigation and portrayed the White House as infected by a culture of lies, deceit and deception. Meanwhile, political fallout from last week’s release of the redacted report continues to escalate, as the chairman of the House Judiciary Committee issued a subpoena Friday for Mueller’s full report.

It’s not really spring in Maine until some river floods. That’s not meant to make light of the trials and tribulations that people who live and work along the state’s rivers face each year. It’s a nod to the awesome power of nature and our relative helplessness in the face of that power.

Our Maine forebears settled along rivers because they hoped to use the waters for power, travel and commerce. But each spring, as floodwaters tear through the riverine landscape — and convert landscape that’s not usually considered riverine into temporary shorefront — we’re reminded that the notion of “harnessing” rivers represents another instance of generational human overreach.

I spent a few minutes watching the swollen Kennebec flow through Richmond on Sunday. We’re downriver from where most of the flood impact is usually felt, but watching entire uprooted trees float by — looking like sea serpents — renewed the sense of awe, mixed with a little fear, that the river commands.

My daughters grew up in Augusta, so spring floods along the Kennebec were a carefully protected spectator sport before they were old enough to attend school. Flooding then became an annoyance when high waters disrupted plans for them to get together with friends who lived on the other side of the river. Augusta’s relationship with the Kennebec is rare, because the river runs through its heart instead of serving as a boundary, the way the Androscoggin does for Lewiston and Auburn or the Penobscot for Bangor and Brewer.

But that does come with added challenges. My older daughter had a school friend who was born in April 1987, during the height of historic flooding that year. His mother went into labor on one side of the river. But the hospital was on the other. The authorities had pretty much barred public travel on the city’s bridges because the rushing waters were really dangerous that year. But they made an exception so his folks would not have to name him Moses. Here is your soundtrack. — Robert Long