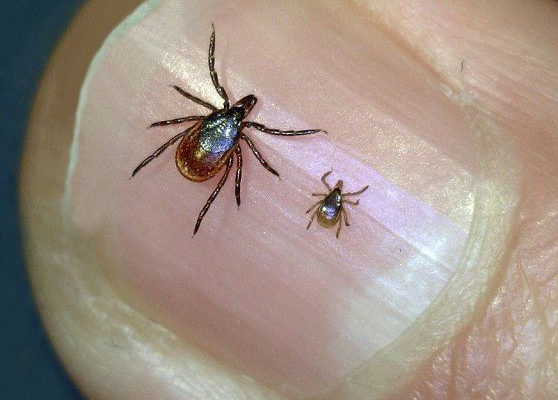 How you can repel disease-carrying ticks without any chemicals

Aislinn Sarnacki • May 14, 2019
In many regions of the country, disease-ridden ticks are a major concern, serious enough to convince some people to douse their lawns with pesticides and chemically treat their outdoor clothing.

In many regions of the country, disease-ridden ticks are a major concern, serious enough to convince some people to douse their lawns with pesticides and chemically treat their outdoor clothing. Yet many people are opposed to introducing synthetic chemicals into the environment, even to combat a particularly dangerous pest.

Over the past two decades or so, this conundrum has led researchers around the world to search for natural methods of repelling ticks from property and people, and they’ve found some success.

Before engaging in combat, you should “know your enemy,” according to the Chinese philosopher and military strategist Sun Tzu. This is particularly important when dealing with ticks, which have important habits and weaknesses that can be exploited.

Two of the most common ticks in the U.S. — the American dog tick and the blacklegged tick — search or “quest” for hosts by perching on vegetation and waiting for them to pass by. They then snag the fur, hair or clothing of the animal (or person) with their front legs and climb aboard.

Ticks also use vegetation as protection from the sun, which can dry them out. Blacklegged ticks, in particular, are susceptible to desiccation, Stafford said.

For this reason, simply mowing your lawn can reduce the number of ticks you see on your property. Short grass doesn’t offer enough shelter for some tick species to survive. Raking up dead leaves, cutting back brush and pruning trees can also help reduce certain species of ticks on your property.

“The thing we’ve found with research recently is that leaf litter is pretty important to the survival of blacklegged ticks,” said Chuck Lubelczyk, a field biologist for the Maine Medical Center Research Institute’s Lyme and Vector-Borne Disease Laboratory. “Removing leaf litter from the yard and allowing it to dry out makes it much less hospitable for the blacklegged tick.”

“The whole concept is to reduce the suitability of the immediate habitat around the home for ticks,” Stafford said. “You’re not going to get rid of all of them like that, but you’re going to reduce their numbers.”

In a study by the Connecticut Agricultural Experiment Station, approximately 67 percent of the ticks sampled were found in densely wooded areas, 22 percent were found in unmaintained transitional edge habitats between woodlands and open areas, 9 percent were found in ornamental vegetation, and 2 percent found on lawns. Then, within the lawn, most of the ticks (82 percent) were located within three yards of the lawn perimeter, particularly along woodlands, stonewalls and ornamental plantings. The study also found that ticks were more abundant in the shaded areas of lawns.

Given those numbers, it makes sense that another common tick management practice is to install a 3-foot-wide barrier of gravel or rubber mulch between lawns and wooded areas and around swing sets and sitting areas. This barrier, open to the sun, discourages tick migration.

Unfortunately, there are some tick species, such as the lone star tick, that can tolerate drier conditions and therefore may not be so easily discouraged by a lack of shelter, according to the University of Rhode Island TickEncounter Resource Center. In addition, the lone star tick actively pursues hosts, moving in response to carbon dioxide and movement.

“It’s a very aggressive tick with more of a hunter strategy,” said Stafford, who added that more research is being conducted about how to manage this especially tough tick.

While ticks like to latch on to humans, they’re also happy to feed on the blood of many other animals. The blacklegged tick, for example, is also known as the deer tick because it frequently feeds on deer.

Therefore, one way to reduce tick numbers on your property is by fencing in highly used outdoor areas so that some of the animals that carry ticks, such as deer, can’t enter. Another option is to plant deer-resistant plants such as daffodils, lavender, mint, asters and marigolds. These plants don’t repel deer, but they don’t attract them, either.

Also, consider taking down your bird feeders for tick season because birds can carry ticks, as can rodents, such as mice and chipmunks. For this reason, it’s also important to clean up trash and anything else that might attract these animals to your property.

Many scientific studies have been conducted in recent years to pinpoint plant-based materials that repel and kill ticks.

[How an invasive plant is helping ticks survive]

Oils from citronella, cloves and lily of the valley repelled castor bean ticks (a European tick also known as sheep tick) in a Swedish study conducted in 2003. Lavender and eucalyptus oil repelled the same species of tick in a 2016 study by researchers in Czech Republic.

Lemon eucalyptus oil has also proven to be effective in repelling ticks, especially blacklegged ticks, Lubelczyk said. This natural ingredient has been tested in multiple studies, and is now commonly found in natural tick repellents.

Encouraged by these studies, a number of companies have combined various plant oils to create natural tick repellants to be applied to skin, clothing and lawns. Common ingredients include garlic oil and essential oil mixes of rosemary, lemongrass, cedar, peppermint, thyme and geraniol. But unlike synthetic pesticides, these natural repellents are not regulated or tested by the U.S. Environmental Protection Agency.

“The issue with the natural spray products is that most don’t work, unfortunately,” Stafford said. “There’s no requirement for efficacy testing, so companies can just pop these [products] out. And the real issue is that you often don’t know exactly what you have. What’s your plant source? What’s the species of plant the oil is coming from? How is it extracted?”

“There are two big projects here in Connecticut and New Jersey under a grant from the CDC evaluating nootkatone for tick control,” Stafford said. “It’s very volatile, so that’s another issue with these [plant-based] compounds — even when it works, you apply it and it’s gone in a day or two.”

“It will take a lot of work and money to develop a product to be sprayed,” he added. “The formulation is critical.”

Moving outside the realm of plants, there is an EPA-registered fungus, Metarhizium brunneum (previously Metarhizium anisopliae), that has been used on lawns and gardens to kill blacklegged ticks. This fungi grows naturally in soils throughout the world and is available commercially as a bioinsecticide called Met25.

“It’s not technically purely organic because it contains a little petroleum distillate as a carrier to keep the spores suspended,” Stafford said, “but it’s definitely a more natural way to go.”

Free-range chickens and other domesticated fowl such as guinea hens and turkeys naturally eat ticks and other lawn pests, but whether this can have any significant impact on the number of ticks on a property is a matter of debate.

For the study, a total of 461 ticks (representing four different species) were recovered from the crops and gizzards of 19 chickens over the course of nine weeks. These chickens had been allowed to free range for limited periods of time in a cattle yard in Botshabelo, South Africa. About 20 percent of the ticks recovered were engorged, and the researchers observed the chickens actually plucking the ticks off the cattle.

“The results evidently show that chickens in Botshabelo are natural predators of livestock ticks,” the researchers concluded.

Nevertheless, much is still unknown about how much of an impact poultry can have on a tick population, especially if only foraging for these tiny pests in vegetation.

“There hasn’t been a lot of work gone on that [topic],” Stafford said, “but with what limited data there is, it really hasn’t had that much impact.”

Regardless of how much effort you put into tick management, it’s unrealistic to think you’re going to entirely rid your property of ticks, Stafford said. “There is no silver bullet.”

That’s why it’s important to stay vigilant while outside, even while in an area being managed for ticks. There are several natural techniques for protection. One of the most commonly practiced techniques is to shield your skin from ticks by wearing long pants tucked into socks. This won’t win you any fashion competitions, but it may delay ticks from finding your skin and biting. It will force them to crawl up your pant leg, where hopefully, you’ll spot them. For this reason, light-colored pants may be best, because the ticks that are dangerous to humans in the U.S. are dark in color.

[In the battle against ticks and Lyme disease, scientists look to the skies]

Another way to naturally defend yourself from ticks is to avoid brushing up against tall grass and underbrush, where ticks are questing. When possible, remain on well-maintained paths; opt to sit on a chair, bench or picnic blanket rather than the bare ground or lawn; and know that ticks may be less active on hot, sunny, dry days.

And finally, develop a habit of checking your body and clothing for ticks after spending time outdoors. The Centers for Disease Control and Prevention suggests showering within two hours of coming indoors because showering may help wash off unattached ticks, and it’s an opportunity to check your body by touch and sight (using a mirror) for ticks. In addition, the CDC suggests tumble drying your clothing in a dryer on high heat for 10 minutes to kill ticks that may be hidden in the folds of your clothing.