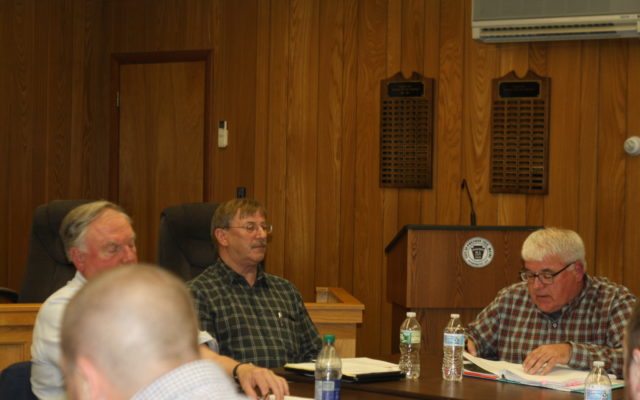 Melissa Lizotte • May 20, 2019
The Presque Isle Planning Board and City Council are considering changes to the city’s land use and development code that would potentially expand the types of businesses allowed to operate in an agricultural zone.

PRESQUE ISLE, Maine — The Presque Isle Planning Board and City Council are considering changes to the city’s land use and development code that would potentially expand the types of businesses allowed to operate in an agricultural zone.

The board and council held a joint workshop session on Thursday, May 16, in which they discussed the possible pros and cons of allowing a half-mile portion of land on the Caribou Road, located five miles outside the center of Presque Isle, to be available to the same businesses that can develop within designated business zones.

Planning board chairman Bruce Roope explained that he and board members began discussing the agricultural zoning rules after Gene Knight, owner of E.C. Knight Company, a modular home dealer located at 449 Caribou Road, expressed interest in purchasing the empty lots near his property that stretch 0.6 miles south to the Craig Road.

The current agricultural, farming and forestry zone only allows for businesses that are directly related or similar to those three development goals, including farms and farming services, riding stables, veterinary hospitals and professional offices of 2,000 square feet or less of gross building area. Any proposal for businesses not directly pertaining to agriculture, farming or forestry is subject to planning board review.

Roope said that he is ultimately against changing the zone due to the Caribou Road’s distance from the city’s downtown region.

“This land is located halfway to Caribou right before the Presque Isle-Caribou line,” Roope said. “It makes me concerned about whether we want to encourage businesses to develop so far from the center of town.”

Currently the retail business zone allows for spaces such as retail stores, professional offices, municipal and government buildings, commercial parking lots, apartment buildings and one- or two-family dwellings except for mobile homes.

The land use and development code states that the purpose of the retail zone is to “provide local sales, services and business space within the City of Presque Isle to serve the daily needs of residents and workforce,” as well as people who visit the city from outside communities.

Councilor Jacob Shaw expressed support for possibly expanding the zone, if doing so would mean greater economic development for the city.

“It doesn’t seem like we should be standing in the way of people who want to start a business, especially if economic development is one of our goals,” Shaw said.

But Roope pointed out that there are many more points to consider before expanding the Caribou Road portion of the agricultural zone, which runs along U.S. Route 1 from Presque Isle to Caribou and frequently sees large amounts of traffic heading to and from Aroostook County’s only two cities. The current speed limit for most of Route 1 is 55 miles per hour.

More businesses on Caribou Road, combined with the area’s larger distance from the center of Presque Isle, he noted, would also mean more travel time for the city’s police, fire and ambulance departments while responding to emergencies.

“We have to keep in mind how much traffic is on that road now. If there was more business development, you would have more cars slowing down to turn into parking lots,” Roope said. “That might give reason for the Maine DOT [Department of Transportation] to lower the speed limit.”

Roope also said he is concerned that Knight has submitted no business proposal for the land surrounding his business, and urged board members and councilors to consider the long-term effects of zoning changes for businesses and residents.

Planning board member Brandon McDonald said although he initially supported the zoning changes, he is now “on the fence” after hearing both sides of the issue.

“I always end up thinking about the sign going into Presque Isle that says, ‘Certified Business Friendly,’ but there are things we should be cautious about. We don’t want to change the zone just to be someone’s personal advocate,” McDonald said, referring to Knight. “I wish he were here to be his own advocate.”

City manager Martin Puckett thanked the planning board for making the council part of their discussions. He expressed desire to possibly schedule a public hearing regarding the Caribou Road zoning to take place during or after the June 5 council meeting.

“The public comment part seems to be all that we’re missing at this point,” Puckett said.

Just when we thought we were out of the woods with kitten season, it has hit full force.  The past few days have been difficult answering the phone and hearing the stories of why people have litters of kittens they need to surrender.
Campaign Corner END_OF_DOCUMENT_TOKEN_TO_BE_REPLACED