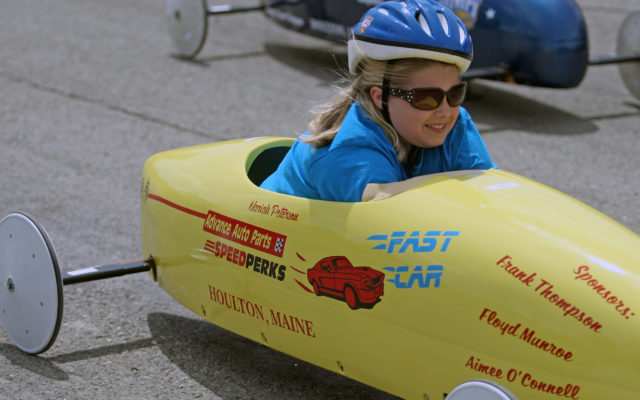 Joseph Cyr • June 15, 2019
Racers between the ages of 8 and 18 converged on Derby Hill in Houlton for the state’s only Soap Box Derby race on Saturday.

Racers between the ages of 8 and 18 converged on Derby Hill in Houlton for the state’s only Soap Box Derby race.

Matthew Conley took home top honors in the Super Stock division, while Meghan Peters was crowned champ in the Stock division. The two youths will now advance to the national All-American Soap Box Derby event to be held July 14-20, in Akron, Ohio. 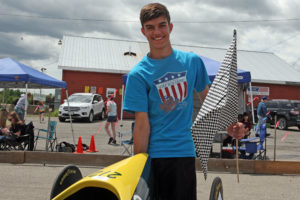 For Peters, 13, Saturday’s race marked her fifth year of racing. The daughter of Julie and James Peters of Houlton, Meghan has been racing since the age of 8.

“I like going fast,” she said. “I just started doing it and really like going down the hill.” 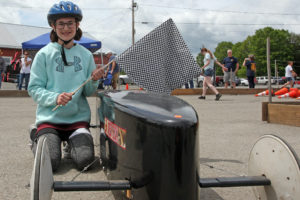 Peters went undefeated on the day, winning all five races she competed in.

“We are very excited,” her mother Julie said. “We had never been to this before her first year. We have never been to Ohio before, so this is awesome.”

Conley, the 14-year-old son of Brent and Jenn Conley of Smyrna, has only been racing for three years but is already going to Akron for the second time. He is following in his brother Zach’s footsteps. In fact, the car Matthew used during Saturday’s event is the same one his brother used a couple of years ago.

“It is so much fun with the breeze in your face, going really fast down the hill,” he said. “If you have sunglasses on, you’re fine.”

At almost 6-feet tall, Conley was one of the tallest competitors at the event. At that size, getting in and out of the derby car can be tricky. Racing also involves a little bit of strategy since each of the cars is designed to be identical.

“The key is to stay low and keep to the outside of the track,” he said.

The gravity-powered cars reached speeds up to 30 miles per hour, with Saturday’s races featuring plenty of back-and-forth competitions in the double-elimination event. The Soap Box Derby has seen numbers dwindle in recent years. In its heyday, back in 1996, the event lasted two days and saw more than 200 racers compete.

Volunteer Andy Mooers, who has been associated with the Northern Maine Derby since its inception, said a greater effort needs to be made to encourage racers from around the state to make the trek to Houlton to compete. 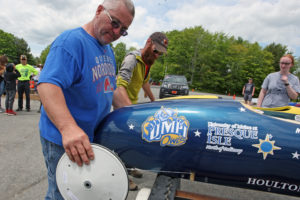 “We are the only Soap Box Derby in the state, so we need to find a way to get the word out better,” he said. “We need to encourage all of the towns in the state to participate because this is such a wonderful event for kids.”

The program began in 1995 in Camden, where racers rolled down Washington Street in the heart of the town. In 1996, the race expanded to five sites around the state, with Houlton, Camden, South Portland, Brewer and Rumford hosting events. 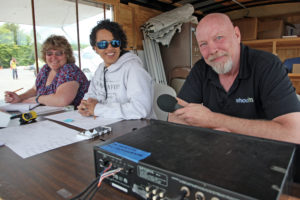 In Houlton’s first year holding a race, upper Military Street (which is also U.S. Route 2) was closed to traffic for a two-day period to accommodate a large field of racers. In 1998, volunteers built “Derby Hill” in Community Park and the race moved to that location. The track runs 835 feet in length and was designed to replicate the hill in Akron.

About 30 volunteers donate their time to make the race happen each year. 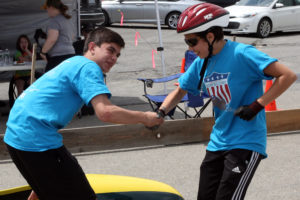