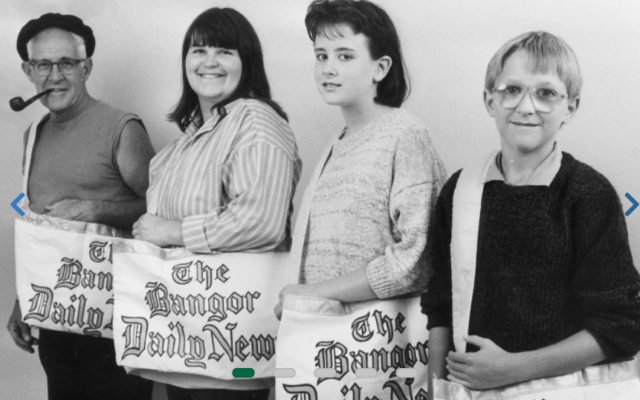 Tabloid origins, war correspondent and the only day no papers were delivered: A 130-year history of the Bangor Daily News

Emily Burnham • June 20, 2019
Just as the world has changed in incalculable ways over the past 130 years, so has the Bangor Daily News. It’s gone from an upstart young newspaper in the era of lumber barons and horse-drawn wagons

Just as the world has changed in incalculable ways over the past 130 years, so has the Bangor Daily News. It’s gone from an upstart young newspaper in the era of lumber barons and horse-drawn wagons, to a printing powerhouse covering two-thirds of the state, to a digitally focused publication with reporters stationed in nearly every corner of Maine.

Here’s a brief history of the BDN, from humble beginnings to today’s digital era.

In 1889, the Bangor Daily News printed its first edition on June 18. The company’s principal stockholder was Thomas J. Stewart, a Bangor shipping magnate who made his fortune in Bangor’s lumber industry. Rather than selling raw timber, however, he sold “shooks” — thinly sliced pine logs used to make boxes for transporting produce.
Stewart ran the BDN during its first year, but when he died unexpectedly in 1890, his sons took over. Until 1895, the BDN was essentially a tabloid — some news, but also plenty of gossip, lurid stories and scandals. Stewart’s sons nearly ran the paper into the ground, but thankfully, in 1895 a buyer stepped in and changed the BDN’s fortunes: J. Norman Towle, great-grandfather to current publisher Richard J. Warren. The same family owns the BDN 124 years later.
File | BDN
Carrier boys line up in front of the original home of the Bangor Daily News at 150 Exchange St. circa 1905.

Just a few years into Towle’s run as publisher, the BDN merged in 1900 with the Bangor Whig & Courier, combining staff and resources into a larger newspaper. One other daily newspaper remained in the Queen City: the Bangor Daily Commercial, which published until 1949.

Though the city of Bangor suffered a devastating fire in 1911, another, smaller fire in January 1914 struck just one building: 150 Exchange St., the longtime home of the BDN. Supposedly, as the fire raged, publisher Norman Towle received a phone call from Joseph P. Bass, publisher of the rival Bangor Daily Commercial, offering full use of his presses. For the next two months, the BDN was printed at the Commercial’s press on Main Street, until the BDN’s March 1914 relocation next door to 170 Exchange St.

In 1929, just as the Great Depression began, a new publisher, Norman Towle’s son-in-law, Fred Jordan, took over. Jordan helped shepherd the BDN through the Depression, bringing the newspaper into what was then the modern journalistic era.

By the 1930s, the paper began to look more like it does today — covering a geographic region comprising more than two-thirds of the state, from Pittsfield to Perry and Waldoboro to Wallagrass. Today, the BDN covers the entire state, with a southern Maine bureau operating out of downtown Portland, alongside bureaus in Augusta, Belfast and Ellsworth, and Bangor Publishing Co.’s five weekly newspapers in Aroostook and Piscataquis counties.

File | BDN
The top of the front page of the Bangor Daily News on Oct. 8, 1941, informs Maine readers that Japan attacked American forces at Pearl Harbor, triggering war between the two countries and America’s direct involvement in World War II.

When the U.S. joined the fight in World War II in 1941, the BDN responded not only by covering the war, of course, but also by sending managing editor John M. O’Connell to Europe to act as a war correspondent between 1944 and 1945, sending dispatches from across the continent. In all, 46 members of the BDN staff served in the armed forces during World War II.

After the war, several big things changed for both Bangor and the BDN. In 1947, the opening of Dow Air Force Base caused Bangor’s population to swell from just shy of 30,000 in 1940 to more than 39,000 by the early 1950s, according to U.S. Census data. Also in 1947, publisher Fred Jordan died, and his wife, Lillis Towle Jordan, took over as publisher, becoming the first female newspaper publisher in Maine history.

Though its press facilities had moved in 1951 to a new location at 491 Main St., in 1955, the BDN moved all of its offices to the Main Street building as well, where the newspaper would remain for 60 years. 1955 also marked the start of the tenure of Richard K. Warren, whose 29-year stint as publisher saw the BDN’s circulation increase exponentially over the years.

The only time in the BDN’s 130-year history when the company was fully unable to deliver any newspapers was Dec. 31, 1962, when 37 inches of snow fell in Bangor, and howling winds caused snow drifts up to 20 feet tall. Delivery trucks simply could not make it out of the Main Street building.

File | BDN
Bangor Daily News carrier Charles Washburn completes part of his summer route on the Glenburn side of Pushaw Lake with his boat and outboard motor in this 1956 file photo. Serving customers at Lakeside first, Charles then takes to the water to make deliveries in the early morning at Sandy Beach, where he is shown stepping ashore with anchor and newspaper bag to make the rounds of the cottages along the lake shore.

By the early 1970s, linotype, or “hot type,” was on the way out, and cold type, or phototypesetting, took over as the BDN’s method of printing the paper. Once this more efficient way of printing was in place, the BDN’s circulation reached an all-time high — more than 100,000 on weekdays throughout most of the 1980s.

At its peak in the mid-1980s, the BDN had more than 300 employees, including more than 150 reporters and editors in the Bangor office and in bureaus in Madawaska, Presque Isle, Houlton, Pittsfield, Calais, Machias, Rockland, Augusta and Ellsworth. The offices at 491 Main St. were at full capacity, and the BDN printed seven editions of the newspaper. The BDN had editions for Aroostook, Washington, Hancock, Somerset, Piscataquis, and Waldo and Knox counties. The City edition covered Bangor and most of Penobscot County.

Publisher Richard K. Warren retired in 1984, and his son Richard J. Warren took over that same year, ushering in a period of dramatic change for the BDN — change that was also happening at newspapers across the globe. In 1989, the same year the BDN celebrated its 100th anniversary, the BDN moved its presses from Main Street in Bangor to a large, state-of-the-art facility in Hampden.

Just a few years later, a novel way of delivering the news would arrive: the internet.

File | BDN
A screenshot of what the first iteration of bangordailynews.com looked like in 1997.

The BDN’s website — initially bangornews.com, before eventually transitioning to bangordailynews.com in the 2000s — launched in 1997. At that time, the vast majority of news articles did not appear on the website. In fact, the only content that did initially appear on the website were outdoors columnist Tom Hennessey’s weekly essays and George Danby’s political cartoons. Hennessey, who died last year, retired in 1996, though he continued to contribute to the BDN as a freelancer. Danby’s cartoons still appear both in print and online.

For the first four years that the BDN’s website existed, it more functionally operated as an Internet Service Provider. The BDN partnered with several small local telecom companies — InfiNet, and then Prexar — to offer dial-up internet service to several thousand Mainers. By 2001, the BDN had gotten out of the ISP game and had started to offer more content from its print pages online.

Gabor Degre | BDN
The Bangor Daily News building on the corner of Buck and Main streets in Bangor as pictured in February 2013.

By the early 2000s, print media had begun to irrevocably transform, as the internet started to become the primary way people consumed information. Few editors or publishers of any newspaper of any size foresaw the change that was about to happen — one that would see revenues from print nosedive and require a total realignment of resources away from print and toward digital.

The BDN website underwent its first major redesign in December 2006, when it began offering the majority of stories that appeared in print online as well. A full digital transformation did not begin in earnest until 2008, however, after Todd Benoit, former editorial page editor, became the BDN’s director of new media.

After several years of research and development, in 2011, Benoit, who today is president and chief operating officer of the BDN, ushered in the “digital first” era, meaning that for reporters and editors, their first priority is writing for the website, with print being secondary. Though print subscribers still make up a large and important part of the BDN’s subscriber base, digital users have made up the majority of BDN readers for nearly a decade.

2013-present: Looking toward the future

Many more changes came rapidly, beginning in 2013, when the BDN closed its printing plant in Hampden, and began printing at other plants around the state. The nearly 125-year-long era of printing the newspaper in-house had ended.

In May 2014, the Bangor Daily News sold its 491 Main St. building to Cross Insurance, and in February 2015, it moved its offices to its current home at One Merchants Plaza in downtown Bangor — just the third major address change in BDN history. In October 2015, the BDN sold the Hampden facility to the Good Shepherd Food Bank.

Though several of its physical assets had been sold, in other ways, Bangor Publishing Co. actually expanded with the 2014 purchase of Bangor Metro magazine, the 2015 acquisition of the St. John Valley Times in Madawaska and the 2016 acquisition of Fort Kent-based news website the Fiddlehead Focus. In 2018, the BDN welcomed Bangor-based marketing firm Pulse into the company, while it closed its Presque Isle printing plant. Also last year, the BDN launched Hello Homestead, a website for a national audience focused on sustainable living and growing your own food.

In September 2017, the site underwent another major redesign, and two months later, the BDN launched paid digital subscriptions — 20 years after bangordailynews.com first went live. Today, the website boasts millions of page views per month, alongside a robust and growing digital subscriber base.

Amid all this change, one thing has stayed the same for all of the BDN’s 130 years: local, independent, family ownership, with reporters on the ground in towns and cities across Maine. Publisher Richard J. Warren, now in his 35th year at the helm of the BDN, is just the fifth publisher to own the paper in more than 100 years, all of them direct descendents of J. Norman Towle.

Watch: A look back at the Bangor Daily News over 130 years

A look back at the Bangor Daily News over 130 years