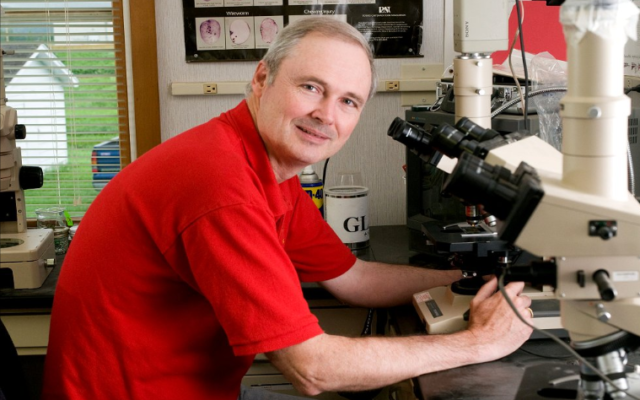 Anthony Brino • June 27, 2019
Longtime potato expert Jim Dwyer is retiring from the University of Maine Cooperative Extension this summer and moving on to a new role to share his knowledge and experience with a new generation of agricultural professionals.

Longtime potato expert Jim Dwyer is retiring from the University of Maine Cooperative Extension this summer and moving on to a new role to share his knowledge and experience with a new generation of agricultural professionals.

Dwyer has spent the last 38 years working for the Extension, largely as a crops specialist working in integrated pest management. This August, he will become a professor in the University of Maine Presque Isle’s agriculture program as the Robert Vinton Akeley Chair of Agricultural Science and Agribusiness. The professorship is an endowed position named after the late Presque Isle potato breeder and made possible with a $1 million donation from his daughter, Mary Barton Akeley Smith.

“It’s a relatively new program. To help build a new program will be exciting,” said Dwyer, who will teach classes in farm safety, integrated pest management and entomology.

Dwyer grew up in Houlton, the son of a dentist and grandson of a potato farmer, and studied biology at Ricker College, prior to its closure in 1978. In college, he started working as a potato field scout with the Cooperative Extension under potato specialist Terry Jones, and soon ventured into in-the-field science involving the region’s largest crop.

“That’s where I got interested in working with potatoes,” Dwyer said.

He went on to study graduate biology at the State University of New York at Geneseo, where he also met his wife Rosalie, a speech and language pathologist with whom he raised two kids who also work in the sciences.

He moving back to Aroostook County, joining the Extension staff in the 1980s, as smaller farms dwindled and larger farms grew and became more mechanized.

“Colorado potato beetles was and still is one of the major issues I spent a lot of time on,” Dwyer said.

Potato beetles have long been the major insect pest of potatoes, once controlled by handpicking in the olden days, then by lead arsenate and DDT before the invention of modern insecticides during the mid-20th century.

“When we stopped using foliar applications, we opened the door for europen corn borer to become a problem,” Dwyer said. “As we managed some problems, some other issues have emerged. That’s been a fascinating aspect of working in the potato industry.”

Scouting for insects begins as potatoes emerge from the soil. The Extension employs around 20 field scouts around the state, with more than a dozen in Aroostook County.

“One of the other things we’re seeing is 30 years ago potato leafhoppers were a rare event. Now they’re becoming a yearly event, and that’s partly due to climate change,” Dwyer said.

Those tiny insects, related to cicadas, feed on vascular tissue of a range of annual and perennial plants and can cause significant crop damage and transmit viruses, a major problem for seed potatoes.

Dwyer said he’s always enjoyed the intellectual and social aspects of his job, taking on new challenges while working with people he knows.

“One of the things that has been fun is working with people that I knew growing up. You work with friends. That makes it a very special place to work.”

When he’s not working, he likes to hunt and fish and manage his and Rosalie’s 68-acre Presque Isle farm on which they planted fruit trees. He’s also a longtime member of the Aroostook Shrine Club.

Dwyer is optimistic about the next generation of agricultural professionals, particularly in his area of expertise, integrated pest management.

“I think there will be young scientists who are interested and willing and able to work in this. A field office is unique. You are on the front lines working with growers,” he said. “It’s been very rewarding to see students who’ve worked for me in the summertime become active in the industry.”

It was a freezing day across The County, but you could hardly tell from the turnout. Even after a massive surge in absentee ballot requests across the Central Aroostook area, droves of people came out to vote in Presque Isle, Mapleton, Washburn and Fort Fairfield.
Pets END_OF_DOCUMENT_TOKEN_TO_BE_REPLACED