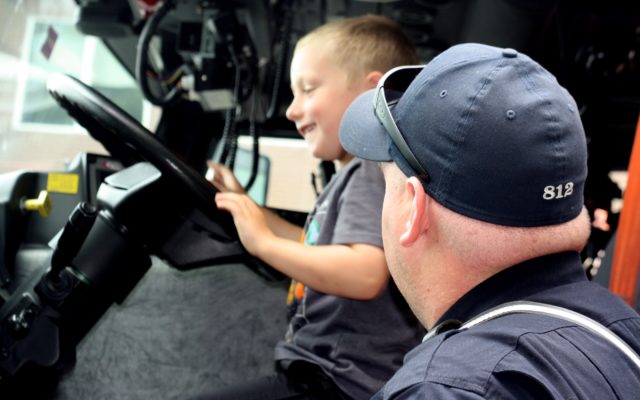 This year marks the third summer that the Presque Isle Fire Department has hosted a youth-oriented fire safety presentation at the public library. Over a dozen children and family members attended the event, which began with fire prevention officer Grant Spinney giving them tips on how to exit a home safely. 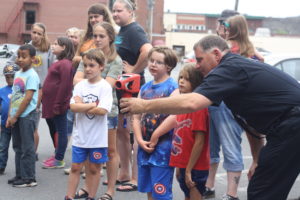 He also added a crucial component to the famous phrase “Stop, Drop and Roll.”

“We don’t just stop, drop and roll. We also cover our faces so that smoke doesn’t get into our mouth, nose, eyes or ears,” Spinney said.

During his presentation Spinney, along with firefighters Randall Bowen and Josh Blanchette, stressed the importance of families establishing a meeting place in their front yard to ensure everyone exits their home safely in the event of a fire.

He told the children to encourage their parents to regularly change the batteries in their smoke detectors, have a fire escape ladder on hand and practice their escape route.

Bowen gave a demonstration of how quickly he needs to put on his fire safety gear before tackling a fire. Attendees both young and old were amazed when Bowen had his gear on in a mere minute and 27 seconds.

“When we drive to a scene we can’t waste any time putting on our gear and getting our equipment ready,” Spinney explained.

The real treat for many of the children came when the firefighters showed off one of the department’s fire trucks and an ambulance vehicle. Bowen explained the purpose of specific fire fighting equipment and even let the youngsters climb behind the wheel of the firetruck and explore the ambulance.

Colton Johnston, 4, of Presque Isle was one of those children eager to talk to the firefighters and see the fire truck up close.

“We learned that we need to have a meeting place at home during fires,” he said. 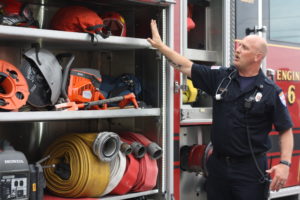 Presque Isle firefighter Randall Bowen explains the purposes of the equipment used to fight fires during a public presentation at the Mark and Emily Turner Memorial Library on Friday. (Staff photo/Melissa Lizotte)

Although 3½-year-old Roslyn Henderson of Presque Isle was much more shy, her mother, Rachel Henderson, said that she, too, had been looking forward to the firefighters’ visit.

“She wanted to see the fire trucks up close,” Rachel Henderson said. “I think it’s great that they [the firefighters] came to teach the kids how to stay safe.”

Spinney noted that the Presque Isle Fire Department regularly hosts free presentations for area schools and businesses in order to pass on knowledge of fire safety to all generations.

“In many instances when we’ve seen families get out of their home safely, it’s because a child told their parents what to do and didn’t panic,” Spinney said. “It’s important for us to spread these messages at a young age because unless kids are told these things they won’t know.”