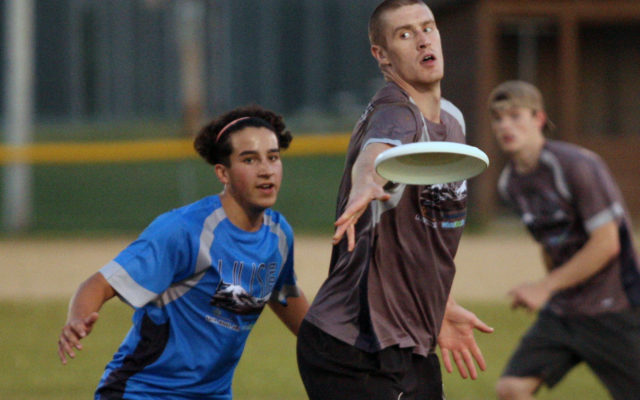 Members of the Carmichael Masonry team that finished as runners up in the league were Cam Callnan, Joel Carmichael, Isaac Vega, Hannah Foley, Julia Rines and Chris Rines. Absent from the championship was Donnie Ouellette.

HUSL was formed seven years ago by Chris Rines, when he relocated to Houlton. He played ultimate disc games in the Portland area after graduating from college. The Portland summer league features upward of 30 teams, with 20 members per team.

“I basically learned from that league, adapted it and brought it to Houlton,” he said. “Plus, I use it as a warm-up tool for cross country and track and field. It overlaps really well.”

Rines is the varsity cross country and track and field coach for Houlton Middle-High School.

HUSL games are played with a flying disc and are similar to soccer in that teams try to advance that disc. Advancement can only be with passes, however, and once a person catches the disc, they cannot run with it. Teams score points by catching a pass in the endzone.

If a player fails to catch the disc at any point on the drive, the opposing team takes over possession.

Just when we thought we were out of the woods with kitten season, it has hit full force.  The past few days have been difficult answering the phone and hearing the stories of why people have litters of kittens they need to surrender.
Campaign Corner END_OF_DOCUMENT_TOKEN_TO_BE_REPLACED