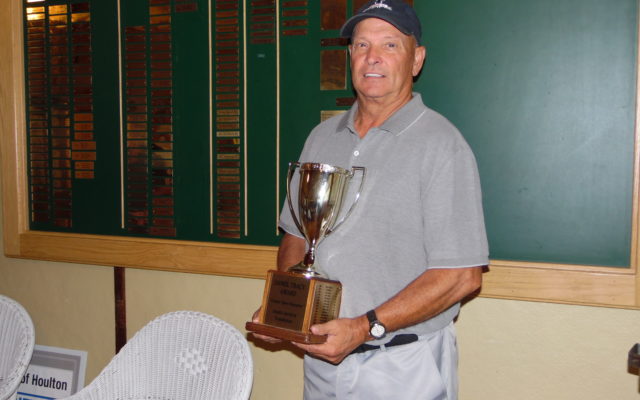 Andrew Birden • August 13, 2019
HOULTON, Maine -- The 30th annual County Open golf tournament hit a bit of a snag Saturday as an intense storm passed through the Houlton area, halting play for a time.

HOULTON, Maine — The 30th annual County Open golf tournament hit a bit of a snag Saturday as an intense storm passed through the Houlton area, halting play for a time.

Because of the storm, organizers of the popular golf tourney had to shorten the event to just nine holes due to excessive lightning and rain Saturday afternoon.

According to event organizer Jackie White, the County Open started as an idea of Bob Anderson’s along with several other golfers in the area who wanted to have a tournament, but also wanted to support a worthy cause. 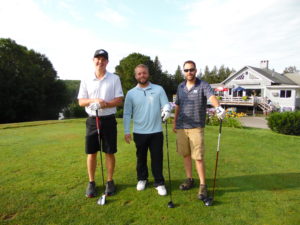 Taking a break from the golf action are, from left, Michael Cleary, Harry Austin and Jesse Chase at this year’s County Open in Houlton. (Contributed image)

They decided that the proceeds of The County Open would be donated to the Houlton Regional Health Services Foundation because everyone in the community benefits from quality health care. Over the last 30 years, The County Open has raised more than $622,000 for the Foundation.

“Although the weather didn’t seem to want to cooperate, all of those who participated in Saturday’s tournament in Houlton still enjoyed a wonderful day of charity, competition and friendship,” White said. “It was a tough decision for the golf committee to make, but for the safety of everyone on the course the tournament was decreased to a 9-hole competition.”

Saturday night’s celebration dinner was attended by many at the Lakeside Restaurant with musical entertainment by Paul Lapointe. Attendees socialized and shared many stories of years past.

Warren Walker placed first shooting a one-under par 35 in the Men’s A division. Adam Deroiser was second at 37, beating out Troy Adams (who also had a 37) by virtue of a scorecard playoff. First net went to Shawn Anderson at 33.95, second was Craig Allen at 34.45, and third net went to Peter Stanley at 34.90. 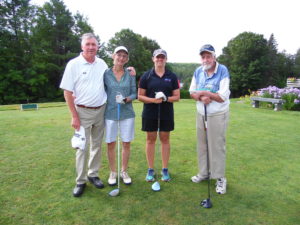 “Looking back over 30 years of The County Open, it was fitting since Walker was the first County Open champion in 1990,” White said. “This ties him with Scot Walker, Allan Anderson and Austin Lancaster with four wins each.”

The Ladies Flight was won by Barb Moakler with a 42. Second place went to Misty Marino at 47 and Kayla Martinez at 60. Net winners were Sue Waite-Yok at 34.00 and Nancy Thompson at 38.25.

On Sunday at VaJoWa Golf Course in Island Falls, a large field of players tackled the course. “Sunday’s Scramble at VaJoWa in Island Falls had 22 teams competing through rain and wind, but thankfully no lightning,” White said. 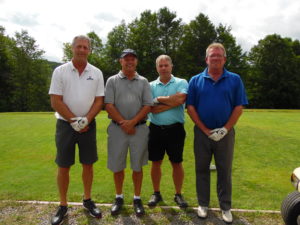 Among the participants in the County Open golf event this year were, from left, Clay Halliday, Warren Walker, Steve Merry and Bill Dwyer. (Contributed image) 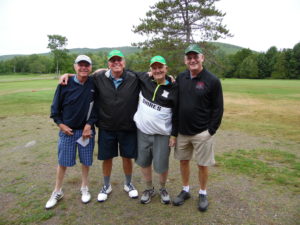