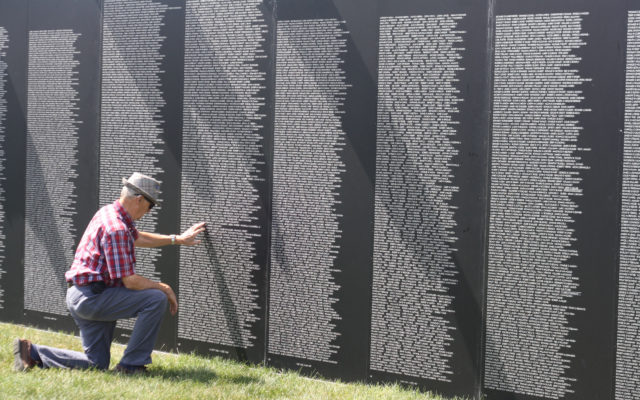 Melissa Lizotte • August 16, 2019
Lynwood Carmen, a native of Wade and a Vietnam veteran, now lives in Missouri but decided to travel to Washburn this past week, not only for Washburn August Festival events but also to see firsthand a special replica of the Vietnam Veterans Memorial.

WASHBURN, Maine — Lynwood Carmen, a native of Wade and a Vietnam veteran, now lives in Missouri but decided to travel to Washburn this past week, not only for Washburn August Festival events but also to see firsthand a special replica of the Vietnam Veterans Memorial.

“I have friends whose names are on the wall,” said Carmen, who served in Vietnam for the United States Army from 1966 to 1967. “No matter where the wall travels, we need to remember the veterans who died in the war.”

On the afternoon of Thursday, Aug. 15, members of the Washburn Rotary Club, Boy Scout Troop 177 and American Legion Oscar Dow Post 48 gathered with veterans and family members for the opening ceremony of the American Veterans Traveling Tribute Wall.

The wall is an 80-percent replica of the actual memorial in Washington, D.C., stands 360 feet long and 8 feet tall and includes the names of all 58,300 soldiers who were killed during the Vietnam War, including 38 from Aroostook County.

Troop 177 Scoutmaster Larry Harrison led the effort to bring the wall to Washburn beginning in October 2018 after finding out that the wall would be available for the town’s August Festival.

The community soon raised funds for the required $4,000 down payment and worked together to make plans for ceremonies to honor Vietnam veterans.

Harrison, a veteran of the U.S. Air Force, remembers serving at Travis Air Force Base in California in 1972 when hundreds of transfer cases carrying deceased soldiers were brought back to the United States from Vietnam. He also recalled witnessing former prisoners of war coming home for the first time since being rescued.

“I’d go down there to watch every time the POW soldiers’ plane came in,” Harrison said. “They would give a salute at the top of the stairs and they would kneel down and kiss the ground because they were so happy to be home.”

During the ceremony on Thursday, members of Boy Scout Troop 177 presented the color guard, raised the American and POW flags and lit the eternal flame that will remain burning until the wall closes at 3 p.m. on Sunday, Aug. 18. The wall is located on the soccer field of Washburn District Elementary School and open to the public 24/7 during the August Festival.

Other ceremonies will be held at the wall throughout the weekend, including one to honor all Vietnam Veterans at 6 p.m. on Friday and a Welcome Home Ceremony on Saturday at 1:30 p.m. Closing ceremonies will begin at 2 p.m. on Sunday.

“We wanted to give Vietnam veterans the welcome home that they didn’t receive when they returned,” Harrison said, referring to many people’s disapproval of the Vietnam War in the 1960s and 1970s. “It’s heart-wrenching to see the names of those who put their lives on the line for us, many of whom were 19 to 22 years old.”

Jackie O’Clair and her nephew Mike Farley, both of Washburn, came to the wall on Thursday to honor O’Clair’s uncle, Richard Berube, and friend Dellwyn Allen Fitch. Both Berube and Fitch served in the Army during the Vietnam War and passed away in 1967 and 1968, respectively. O’Clair was 13 years old when her uncle died.

“It’s very humbling and overwhelming,” said O’Clair, about seeing the traveling wall. “I think the wall, along with the memorial park in town, is such a nice way to thank all the veterans here today.”

Gubernatorial candidate John Glowa said that he wants to spur government reform that truly creates a system of, by and for the people when he visited Presque Isle City Hall.
Pets END_OF_DOCUMENT_TOKEN_TO_BE_REPLACED

There are so many types of personalities when it comes to pets.  “Shy” is a word that some folks use to describe cats and dogs who are fearful. Many times this “shyness” is a fear of strangers, but it can also be fear of being picked up and handled, new places or sudden movements or noises.
What's Happening This Week END_OF_DOCUMENT_TOKEN_TO_BE_REPLACED