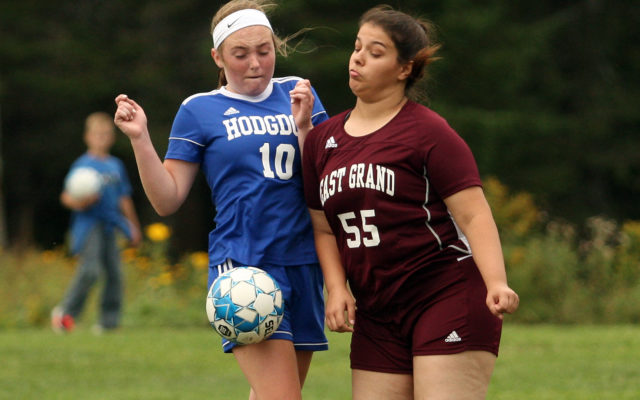 Joseph Cyr • September 10, 2019
The fall soccer season began with a bang this past week as some teams finally saw their first action, while others were playing in the fifth game of the year.

HOULTON, Maine — The fall soccer season began with a bang this past week as some teams finally saw their first action, while others were playing in the fifth game of the year.

The following is a recap of games played through Saturday, Sept. 7, that were reported to the newspaper. Coaches are asked to submit their results to jcyr@bangordailynews.com for inclusion each week.

Ashland 3, Southern Aroostook 2 — At Dyer Brook Sept. 4, Weston Robinson, Joshua Celestre, Sam Craig each scored goals for the Hornets (3-2) in a victory over SA (3-2). Gavin Vining had two goals to lead the Warriors, while Logan Swallow had an assist. Jacob Brooks made nine saves in net for SA, while Garrett Tilley had three saves for Ashland.

Houlton 2, Lee Academy 1 — At Lee Friday, Keegan Gentle and Jed Gilpatrick each scored a goal to lead Houlton to a season-opening victory. Jadon Gentle tallied an assist for the Shires. Drew Foley made 10 saves in goal for Houlton.

Hodgdon 6, Woodland 1 — At Hodgdon Friday, Josh Foster scored a hat trick, while Josh McGillicuddy, Seth Tapley and Hunter Tapley each had solo goals for the Hawks (2-0). Colton Folsom had two assists, while Foster added one.

Michael Sanders and Elijah Matheson combined for six saves on 10 shots for the Hawks.

Hodgdon 8, East Grand 0 — At Hodgdon Sept. 4, the host-Hawks had a goal-scoring explosion in their first game of the season. Emma Drew had two goals and Autumn Ganzel and Hope Howland each had one. The remaining four goal scorers were not reported. Mikyla Howland had an assist for the Hawks.

I was mentioning to our board of directors this past week that I got a quarterly report from a large online retailer who will donate a portion of my purchases to a charity I select.
Campaign Corner END_OF_DOCUMENT_TOKEN_TO_BE_REPLACED