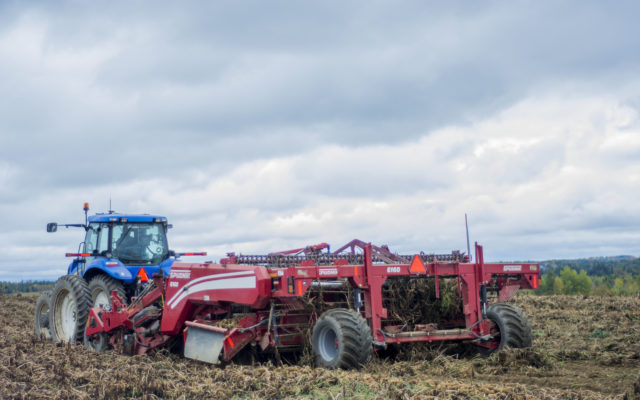 Melissa Lizotte • October 5, 2019
While last September saw many Aroostook County farmers delaying their work in the potato fields due to warmer than average temperatures, this year’s harvest season started with a slight pause due to rain and much cooler early autumn temperatures.

PRESQUE ISLE, Maine — While last September saw many Aroostook County farmers delaying their work in the potato fields due to warmer than average temperatures, this year’s harvest season started with a slight pause due to rain and much cooler early autumn temperatures.

“Last year September was a bit warm, in the high 70s. There were a few days when it was so hot we didn’t work in the fields,” said Don Flannery, president of the Maine Potato Board. “This fall it’s been a little wetter, but much cooler.”

Flannery said that when the first official day of harvest — Monday, Sept. 23 — came around, heavy rain showers prevented farmers and their workers from heading outside. Day temperatures in the 50s, unusual for late September, also contributed to farmers delaying the start of harvest.

Ideal temperatures for harvest, he said, are those no higher than the low 70s during the day for comfortable working conditions and above 35 degrees at night so that soil does not freeze overnight.

But by the end of the week, harvest was up and running again and back on track to finish in mid-October. Thus far, Flannery noted, farmers have not detected diseases, blemishes or other causes for concern with their crops.

“There are no ways to make up harvest days once you lose them. Usually we finish in the middle of October, but everything is weather-dependent. There’s no set schedule,” Flannery said, on Sept. 30. “It’s hard to tell, but I’d say we’re getting close to halfway done.”

Of the 255 potato farmers in Maine, 90 percent of the state’s potato crop comes from Aroostook County. While 65 percent of harvested potatoes are shipped to processing plants such as those owned by McCain’s Foods in Easton and Penobscot McCrum — who is in the process of constructing a plant in Washburn — 20 percent is devoted to seed potatoes and 15 percent are sold to the fresh food market.

“It’s a little too early to make a judgment on this year’s yield,” Flannery said.

Halfway Home Pet Rescue in Caribou has partnered with the Houlton Humane Society shelter for a cat spay and neuter clinic on Saturday, May 30, and Sunday, May 31, in Houlton.
Campaign Corner END_OF_DOCUMENT_TOKEN_TO_BE_REPLACED