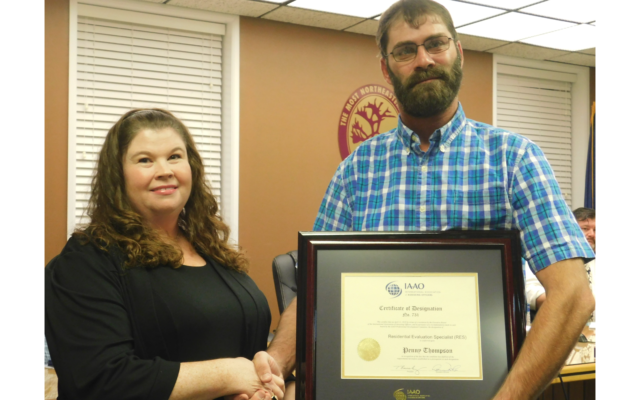 Nina Mahaleris • November 1, 2019
Caribou residents squeezed into the tight quarters of the City Council chamber on Monday night as council members and the public debated the financial burdens of repairing some of the city’s older buildings.

CARIBOU, Maine — Caribou residents squeezed into the tight quarters of the City Council chamber on Monday night as council members and the public debated the financial burdens of repairing some of the city’s older buildings.

Susi said that the roof can’t bear much weight and when heavy snow melts, it seeps into the insulation and forces the walls to move apart.

There is almost enough space in between the walls of the building to put a hand through them, Susi explained on Monday night.

The current fire station, which was built in the 1970s, wasn’t designed to lock in heat, Susi said. This means that the station has to burn through more heat during the winter than they would with a more modern structure.

Susi said the department has been working with the council over the past several years to get the building’s repairs on the city budget.

“We’re to the point now where it really needs to be done and can’t be pushed off,” he said on Thursday morning.

The project is included in the city’s draft capital facilities budget for the upcoming year, said City Manager Dennis Marker.

According to Marker, the fire station is now being evaluated by Sewell Engineers to address a new roof system and structural shoring. The design and management is estimated to cost $64,000, which doesn’t include construction costs.

Yielding complaints about the tax burden from some residents, councilmember Thomas Ayer said, “It’s a heck of a lot better than 5 million or ten million … we know what needs to be done, plain and simple.”

“Something needs to be done before that [roof] falls on our firefighters’ heads,” said Ayer.

But the fire department isn’t the only building that needs immediate attention. The police station, which is located on the bottom floor of the city hall building, isn’t suitable for the department anymore.

Marker said the station has many issues including not enough space for processing, interrogation and evidence storage. It also lacks secure prisoner transition areas, he explained.

The council will be interviewing prospective architectural firms later this week to help evaluate their options for possibly relocating the police station, he said.

“We’ve been studying options for the past two years to make the facility safer, more secure, and in compliance with mandated operation standards. We are now looking at the possible retrofit of vacant buildings downtown or even city hall,” he said.

One location the council is considering for the station location is the newly vacated Sitel building.

It would cost the city roughly $3.5 million to construct a new standalone building for the station, Marker said.

Despite moving into executive session, the council did not take any action on Monday night regarding the buildings or what to do with the Sitel business location.

Later in the meeting, the council commended City Assessor Penny Thompson for becoming a Residential Evaluation Specialist with the International Association of Assessing Officers.

The RES designation is awarded to municipal assessors who demonstrate “professionalism and competency in the valuation of residential property for tax purposes,” according to the IAAO website.

Thompson said she completed a total of seven week-long courses on ethics and valuation subjects with an eight-hour exam focusing on property tax assessing and depreciation.

She also had to pass a four-hour master exam to receive the RES designation. Thompson said this is something she’s worked on consistently since 2013. After talking with Caribou residents, Thompson said she recognized a desire for a local person to have this certificate to better serve the public.

Addressing the council on Monday night, Thompson said, “They [residents] felt it was somebody from away that came up here. That’s why I felt it was important to … be able to do this.”