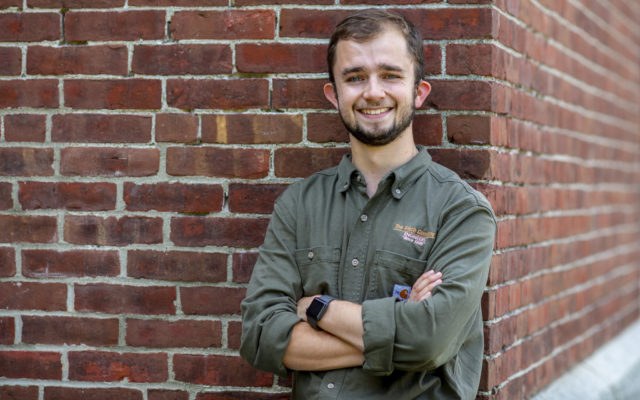 Contributed • November 1, 2019
Nicholas LaJoie has a knack for electronics and innovation -- and he’s using that to give back to his Aroostook County roots.

VAN BUREN, Maine — Nicholas LaJoie has a knack for electronics and innovation — and he’s using that to give back to his Aroostook County roots.

“Growing up on a farm allowed me to develop a natural love for everyday problem solving, so I have always been interested in being an engineer,” says LaJoie, who hails from a potato farm in Van Buren and now lives in Portland.

He graduated in 2018 from the University of Maine with a bachelor’s degree in computer engineering. Since then, he’s worked as a computer engineer for the Fitch Company in Gray, an engineering consulting firm that specializes in electrical and control system services for industrial spaces like paper mills and power plants.

Before graduation, LaJoie was making strides in engineering innovation, developing the company IoTato, based on an idea he had in high school.

“My dad, a potato farmer, has multiple storage facilities that keep the crop at optimal temperatures during the winter months,” LaJoie said. “To ensure these facilities are operating properly, my dad spends at least an hour of each day driving to each facility to manually check the temperatures. I used to ride around with him and wonder what I could do to save him the time and hassle.

“By my senior year at UMaine I had the technical depth to conceive of a device that my friends and I could design and build that would provide a low-cost, rural-friendly solution for farmers throughout the state of Maine,” he said.

And he has brought that design to life. He pitched the idea for IoTato at the UMaine Business Challenge in March 2018, and received the $10,000 innovation prize. The company’s name combines “IoT,” the acronym for “Internet of Things” — referring to interconnection through computing devices embedded in everyday objects — and “potato.”

“There are several existing products out there that are costly, not user friendly, and/or hard to implement in rural areas. Many storage facilities are not intended to ever need internet access, and are often in locations where using cellular data is either expensive or not yet possible,” said LaJoie.

The summer following graduation, LaJoie worked with fellow computer engineering graduates Kent Seneres and Max Geffken to build a prototype of IoTato. By January 2019, they were in testing stages, and since then have worked on improvements and redesign with plans to begin constructing an improved IoTato device in the fall. Isiah Brown, an MBA classmate, helped the team develop a business plan.

While at UMaine, LaJoie interned with MedRhythms, a digital therapeutics company that uses sensors, music and AI to measure and improve walking, and with Portland-based software development company Kepware Technologies. He credited Andy Sheaff, a lecturer in electrical and computer engineering, and Don Hummels, a professor of electrical and computer engineering, with aiding in his academic success.

While at UMaine, LaJoie was a Mitchell Scholar and involved with the Mitchell Institute. He participated in the Entrepreneurship Club as a founding member and club president; went on a mission trip through the Newman Center; planned and promoted for the Maine Day Meal Packout; belonged to the fraternity Sigma Phi Epsilon, through which he received the J. Edward Zollinger Outstanding Senior Award; and the Sophomore Owls and Senior Skulls Traditions Societies.

Now, LaJoie occupies his free time with marathon training — he first ran one in 2017 and is training for another in 2020 — as well as filmmaking.

Submitted by the University of Maine, Division of Marketing and Communications, in Orono.