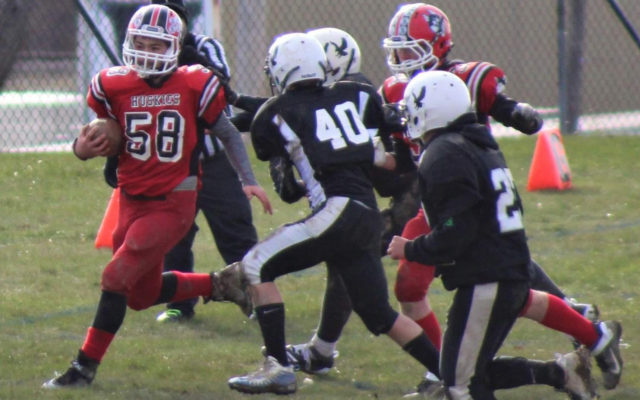 Joseph Cyr • November 12, 2019
The Aroostook Huskies hosted the Damariscotta Eagles Saturday at Northern Maine Community College in a Maine Independent Football League playoff and the home team did not disappoint.

PRESQUE ISLE, Maine — The Aroostook Huskies hosted the Damariscotta Eagles Saturday at Northern Maine Community College in a Maine Independent Football League playoff and the home team did not disappoint.

The Huskies forced a turnover on the first drive of the game thanks to an interception by Zaylan Johnston, setting the tone for the game. The team then drove the length of the field and scored on Aiden Hanks 10-yard run. 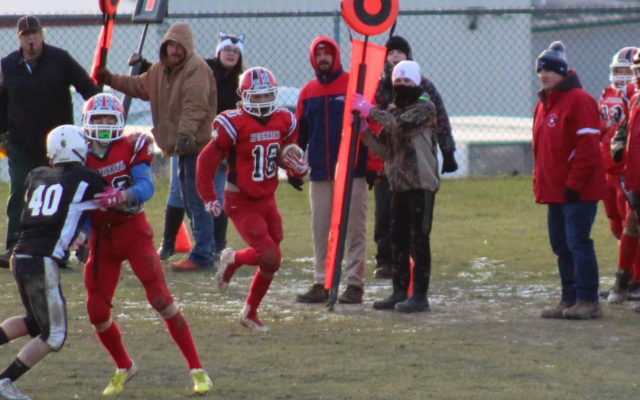 Running along the sidelines is Angel Riopelle of the Aroostook Huskies during a Saturday, Nov. 9, playoff game. The Huskies won 50-18. (Photo courtesy of Taylor DeFelice)

The Eagles were able to rebound with a score of their own, but after that it was all Huskies as the home team rolled to a 20-6 halftime lead and never looked back.

“We were able to force more turnovers in the second half and converted them for scores,” coach Taylor DeFelice said.

For the Huskies, quarterback Dom Poisson completed 12-of-19 passes for 202 Yards two touchdowns and three interceptions. He also had nine carries for 78 yards and two scores. Ilijaha Fortes had eight carries for 20 yards and a score and added eight catches for 113 and a touchdown. 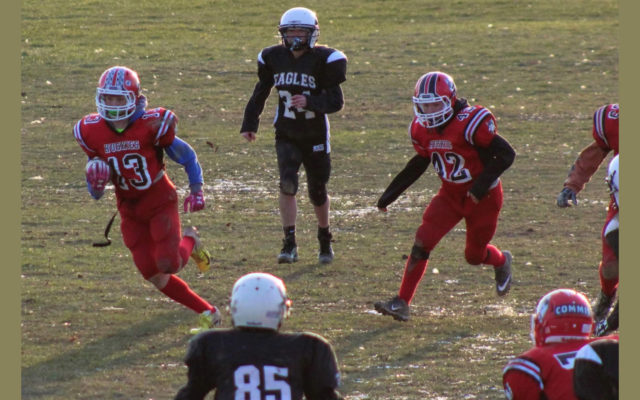 Scrambling with the ball is Zaylan Johnson (No. 13) as teammate Brayden Fitzgerald (No. 42) looks to block during a Saturday, Nov. 9, playoff game. (Photo courtesy of Taylor DeFelice)

Hanks chipped in five carries for 15 yards and a score. Johnston had three catches for 60 yards and a touchdown and also added a 2-point conversion. Connor Rideout had one catch for 20 yards.

Just when we thought we were out of the woods with kitten season, it has hit full force.  The past few days have been difficult answering the phone and hearing the stories of why people have litters of kittens they need to surrender.
Campaign Corner END_OF_DOCUMENT_TOKEN_TO_BE_REPLACED