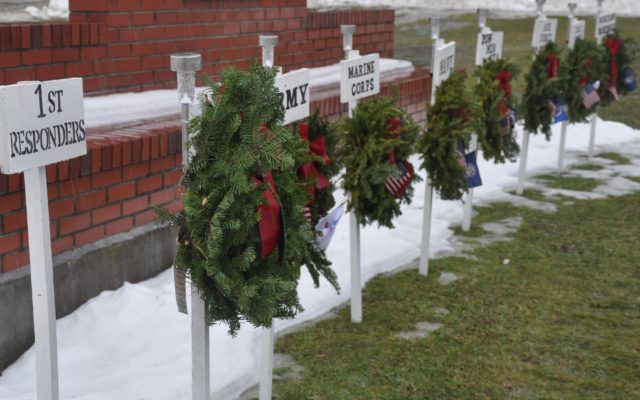 Hundreds come out in Littleton for Wreaths Across America

Jen Lynds • December 17, 2019
Despite a cold, consistent rain, more than 100 people turned out at the Littleton Cemetery on Saturday for National Wreaths Across America Day.

LITTLETON, Maine — Despite a cold, consistent rain, more than 100 people turned out at the Littleton Cemetery on Saturday for National Wreaths Across America Day.

The event works to bring both young and old together to remember the fallen, honor those who serve and teach the next generation about sacrifice and freedom.

For the last two years, the Maine Agri-Women have “adopted” a cemetery in Aroostook County to host a Wreaths Across America ceremony.

The first ceremony was held at the Bridgewater cemetery and last year at the Mapleton cemetery where the group was able to place 131 wreaths on veterans graves. Maine Agri-Women is an affiliate of American Agri-Women, which is the nation’s largest coalition of farm, ranch and agribusiness women with more than 50 state, commodity and agribusiness affiliate organizations throughout the country, according to its website. 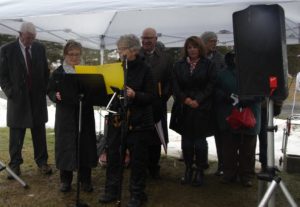 Nancy Wright, a longtime member of Maine Agri-Women, thanked those who came to the event. She said that thousands of volunteers across the nation were joining together to do the exact same thing as the people in Littleton, despite the weather. Wreaths Across America coordinates wreath­-laying ceremonies at more than 1,600 locations across the United States, at sea and abroad, according to its website.

Prior to the ceremony, members of the organization had gone to the more than 100 veterans’ graves in the cemetery and pounded wooden stakes into the snowy, icy ground to create posts to hang the wreaths.

Each year, a new theme is chosen by the national organization to help local volunteers and supporters focus their messaging and outreach in our communities. This year, the theme was “Everyone plays a part.”

During the ceremony, Sen. Michael Carpenter, D-Houlton, noted that veterans had served, fought and died in rougher conditions than the residents were experiencing on Saturday.

“They made the ultimate sacrifice for our freedom,” he said.

He noted that they had braved the frozen ground of Korea, the jungles of Vietnam, the heat of Iraq and the cold of Afghanistan to serve their nation in a time of need. Carpenter is a Vietnam veteran.

Volunteers trek up the icy walkway of the Littleton Cemetery to place wreaths on the more than 100 veterans’ graves in the burial ground during the National Wreaths Across America Day ceremony on Saturday, Dec. 14, 2019. (Jen Lynds | Houlton Pioneer Times)

Members of Girl Scout Troop 794 of Bridgewater joined with local youth to sing the song “I’m An American” before the wreaths were placed.

Wright encouraged residents to think about the fallen as they scattered across the cemetery to place the wreaths.

“Remember to say their names out loud,” she said on Saturday.

Wreaths Across America was founded in 2007. Morrill Worcester, who began the wreath company in 1971, started laying wreaths on veterans’ graves in 1992 and expanded the organization each year.