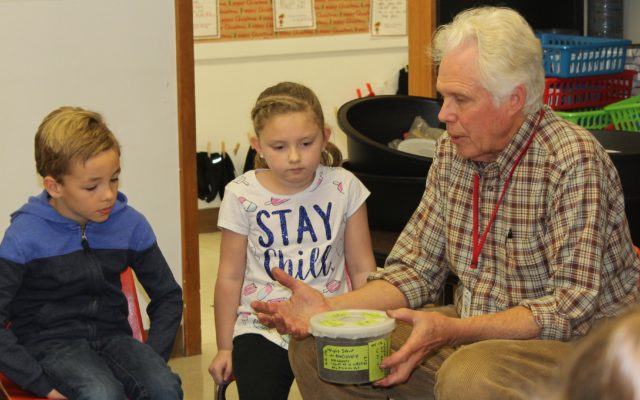 Creepy, crawly worms are not all bad

Robie has a passion for worms. It has become not only a hobby, but a labor of love spreading his interest from one end of the state to the other. Robie, a retired chemical engineer, was accompanied by his wife, Sue, who helped with the set up and assisted the students.

Robie has received many awards for this contribution to reducing the landfill waste through vermiculture. His most recent award was the 2019 ecomaine Eco-Excellent Award, recognizing his efforts as an exemplary model of the effectiveness, increased awareness, community impact and ease of replication that the award program aims to recognize.

Adjusting to retirement in 2008, he started his first worm bin. From that one bin he now supports more than 1,200 throughout Maine. His presentation focused on the value of “vermicomposting,” as a community service. Vermicomposting is the product of the decomposition process using various species of worms, usually red wigglers, white worms and other earthworms, to create a mixture of decomposing vegetable or food waste, bedding materials and vermicast.

Following his adult workshops, participants leave with a complete worm bin setup of one or two for a classroom, including worms and an invitation to have him join in harvesting their bins. He shows them how to use the worm casting for use in their gardens or houseplants.

All one needs is a 10-gallon tote, a small wooden pallet to fit the bottom and about two pounds of dry newspaper. A little newspaper is torn up to cover the bottom, then the pallet is placed on top to provide circulation. Then more shredded newspaper goes on top of that, add some water and squeeze it out of the paper so it’s just wet and not soggy. Then fluff it up. Add worms at one end of the tote, while adding your composting material on the other side. Then cover with a dry sheet of newspaper over the top of the tote or some open weave fabric before setting the cover askew on the top. 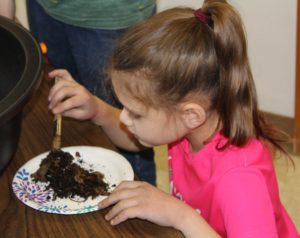 Items such as coffee grinds, peelings, faded flowers, apple cores, banana skins and cabbage leaves can be disposed of in the bin for the worms to feed on. However, foods with oil, meat, bones or dairy may not be used.

Robie said to remember to feed, water and fluff, keeping the bin away from light and heat and do not use colored print paper. Feed the worms three times their weight or about a quart of food scraps, once every two to three weeks.

By networking throughout the state, participants keep Robie supplied with materials used in the worm farm, his workshops and the harvests. He also is supported by sponsors who do the advertising, provide some of the venues, including school visits.

Robie will return to Houlton in the spring to do more presentations and to check on the worm bins the classes created. Former Wellington School principal, Nancy Wright, who is a member of the Maine Agri-women, was instrumental in bringing Robie to Houlton after participating in one of his workshops in southern Maine.

RSU29 has also been reducing the collection of water bottles, by installing new fountains with a fill your water bottle area. This has saved several thousand plastic bottles just since the installation in the fall.