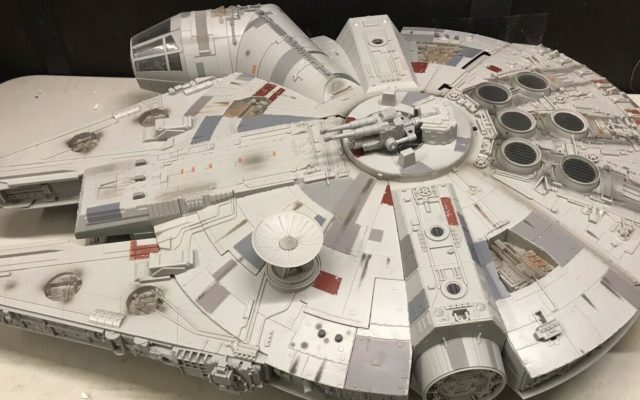 Jen Lynds • December 25, 2019
Back in the late 1980s, Jamie Shaw of Caribou remembered spending “much of the fall and into the winter” wishing for a particular Christmas gift.

HOULTON, Maine — Back in the late 1980s, Jamie Shaw of Caribou remembered spending “much of the fall and into the winter” wishing for a particular Christmas gift.

Shaw said she was in elementary school at the time and “it seemed like all” her friends had one of the most popular items on the playground that year — a Pogo Bal.

A mix of a toy and fitness equipment, the invention featured a bouncy ball surrounded by a ringed platform where the user placed their shoes so they could bounce around.

“All of my friends had one, and I wanted one so bad,” she said. “It looked a bit like the planet Saturn, and it took awhile to be able to bounce on it without falling off. But they were really fun!”

Shaw said that she begged her parents for the gift for months and spent the days before Christmas “feeling around the packages” to see if they got her one.

“I was really disappointed at first,” she said. “Because they had a really unique shape to them, and I didn’t feel any package that felt like it had one of them in it, so I thought they hadn’t gotten me one.”

To her surprise and happiness, however, it was under the tree on Christmas.

“My mother had wrapped it in a bigger box,” she recalled, laughing. “I used that thing for years.”

Mary Nichols of Houlton said that her favorite childhood Christmas gift was a new bicycle.

“I always wanted a 10-speed bicycle,” she said. “But my older sister had one, and my parents didn’t have a lot of money. They made me use her bike for years. It was a nice bike, but I could only use it when she wasn’t on it, and it was too big for me.”

After asking for her own over several birthdays and Christmases, she finally stopped asking.

“I figured I’d never get one,” she said. “But the minute I stopped, they bought me one. It was a beautiful dark blue. My parents hid it in the garage and made me unwrap all of my gifts before they took me out there to give it to me.”

Jacob Hatchett, another Caribou resident, recalled wanting what most boys growing up in the late 1970s and 1980s wanted for Christmas — Star Wars memorabilia. In his case, it was models of the Millennium Falcon and the X-wing starfighter that were featured in Star Wars “A New Hope,” “The Empire Strikes Back” and “Return of The Jedi.”

“Those were expensive,” he said. “But a lot of my friends had them, so I recall promising my parents I would ‘be good’ for the whole next year if they got me the toys. I don’t know if that really worked out, but I got the toys.”

Hughes said he is still a fan, and even asked his wife for more Star Wars memorabilia for Christmas.

“I am really hoping to get the Lego Millennium Falcon,” he said. “It costs about $150, but my son and I really want to assemble it together.”

June is generally a month that also marks the height of “kitten season,” when large litters of kittens are born and often end up in animal shelters.   Luckily, here at the Central Aroostook Humane Society, we have seen a dramatic drop in the cat population over the past five years, mostly due to our spay and neuter program.
What's Happening This Week END_OF_DOCUMENT_TOKEN_TO_BE_REPLACED