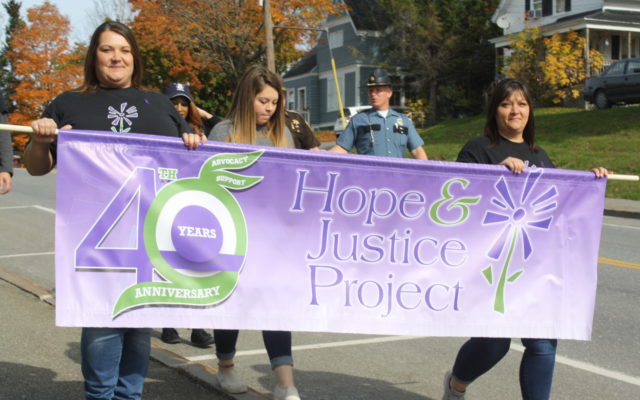 Police, domestic violence advocates reflect on a decade of work

Jen Lynds • January 16, 2020
Over the past 10 years, there have been many changes to the way that County officials and law enforcement officers have dealt with domestic violence.

PRESQUE ISLE, Maine –Over the past 10 years, there have been many changes to the way that County officials and law enforcement officers have dealt with domestic violence.

New programs have been developed, past initiatives have been revamped, and law enforcement officers have concentrated on additional ways of dealing with both victims and perpetrators.

All of this has created new criteria for dealing with the scourge of partner abuse as Aroostook County moves into 2020 and beyond, according to officials with both the Hope and Justice Project and the Aroostook County Sheriff’s Office.

Tammy Albert, director of education, prevention and training at the Hope and Justice Project in Presque Isle, said in an interview earlier this month that the organization works to raise awareness about domestic violence, dispel myths and promote healthy relationships, and also provides training around the issue.

The Hope and Justice Project also offers legal advocacy to support victims in courtrooms in Houlton, Presque Isle, Caribou, Madawaska and Fort Kent, according to its website. It offers prevention education, training and consultation, along with emergency shelters and transitional housing and services.

Albert said that, in general, the organization has seen more people who seek help as each year passes.

“I think that we have seen more people who have come through the doors who are worried about themselves, a friend, or maybe even a co-worker,” she said. “And that is because of the additional educational programs we’ve put forth out there.”

Stephen McCausland, spokesman for the Maine Department of Public Safety, said in October 2019 that domestic violence assaults decreased 11.5 percent in 2018, with 3,699 incidents reported in 2018 compared to 4,178 incidents in 2017. This was the sixth consecutive year that domestic assault reports have decreased.

Albert said that she was “extremely pleased” to see those figures, attributing the numbers to the hard work of domestic violence educators, volunteers and agencies throughout the state.

At the same time, she said, it is hard to gauge the number of people who come into agencies seeking services and leave with information, never having further contact with the agency or law enforcement.

Albert said on Wednesday, Jan. 8, that over this decade, the Hope and Justice Project worked to get a number of additional people trained to work on their domestic violence hotline.

“That was something we really wanted to get done,” she said. “And that will help us a lot more moving forward.”

Albert said she is not sure whether domestic violence numbers were affected by the drug problem that grew worse over the past decade.

Aroostook County Sheriff Shawn Gillen said that his agency is still dealing with the same number of domestic violence calls they did a decade ago. Now, however, they are dealing with them differently.

He said deputies have had more training in how to properly deal with calls, which has changed how they respond to individuals seeking support.

“We have learned so much more now about how to properly respond,” Gillen said. “It is no longer about what ‘he said/she said.’ We have taken a completely different approach. Our policies have gotten stricter.”

Gillen said that the sheriff’s office also budgets money for a domestic violence investigator to assist in solving the volume of cases.

“We have seen success with that,” he said.

June is generally a month that also marks the height of “kitten season,” when large litters of kittens are born and often end up in animal shelters.   Luckily, here at the Central Aroostook Humane Society, we have seen a dramatic drop in the cat population over the past five years, mostly due to our spay and neuter program.
What's Happening This Week END_OF_DOCUMENT_TOKEN_TO_BE_REPLACED