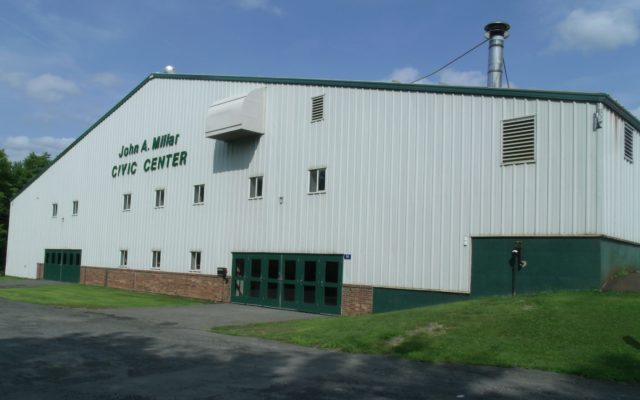 HOULTON, Maine —  Jessica Merriman said Thursday that she can still remember the thrill of grasping onto the old wooden panels at the John A. Millar Arena in Houlton and putting a tentative foot out onto the ice.

Merriman, a former Houlton resident who now lives in Portland, said that she spent most of her winter weekdays looking forward to the weekend, a time when the arena would throw open its doors and welcome the community for “public skating.”

“I was one of those rare people who thought that winter was the best time of the year,” she said, laughing. “I just loved to skate and ski and snowshoe. I will never forget when I was 6 years old and my sisters and I got new skates for Christmas. That was it. I was hooked.”

Merriman said that she and her friends would meet at the arena most weekends for public skating, spending hours there.

“That really was the most well-organized, fun time ever,” she said. “Music from WHOU blared over the speaker system, games were organized every hour or so and there were lots of chances to win prizes. I was quite good at the limbo, so I won free skating coupons a few times.” 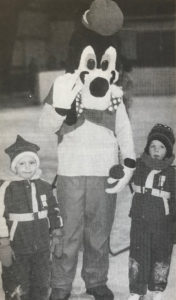 Two youngsters, Sharif Abouleish and Alex Mooers, posed with Goofy for a photo at the John A. Millar Arena in this file photo from 1993. (Houlton Pioneer Times File)

Built in 1974, the 110-by-225-foot building was named for John A. Millar, a local hockey enthusiast. It was located in Community Park in Houlton. Disaster struck on Jan. 30, 1998, however, when the building collapsed at 2 p.m under the weight of snow and ice that had built up on its roof.

It was one of a number of roofs that fell in that year, as record snowfall was reported. Tragedy was averted by only three hours, as it was scheduled to open at 5 p.m. for public skating.

Marie Hughes, a Houlton resident, said that she has a number of fond memories of the Millar Arena. She said that her mother taught her to skate there, guiding her along the edges of the rink on double-bladed skates that she rented at the facility.

Once she graduated to single blades and became good at skating, she was given a pair of white ones for her birthday a few years later.

“The rink was the best place to hang out,” she said. “You saw all of your friends there on weekends, and met new people from the surrounding schools and towns, too. I remember in the 1980s when The Bangles’ song, ‘Walk Like An Egyptian’ was popular. When it came on at the rink, everyone would be skating around doing the dance moves.”

After the collapse, the town opted to rebuild and expand in 1999-2000 on the same spot as the former arena.

The 24,200-square-foot Millar Civic Center features an ice rink in the winter and is a site for trade and gun shows, wedding receptions and other events throughout the rest of the year.

Recently we took in a cat named Joe. He is a very sweet cat with a multitude of problems. He was rescued from the streets here in town, but Joe turned out to be a very sick kitty and was surrendered to The Ark because the resources were not there to help him.
What's Happening This Week END_OF_DOCUMENT_TOKEN_TO_BE_REPLACED