Yeah, I’d say it was just a “mite cool” 10 days ago, back on the 9th, when The County registered its first reading of 30 below this season (recorded at Masardis). Presque’s Isle’s 23 below was the Star City’s coldest of the season, and the third 20 below or colder this winter. Houlton’s 21 below was its coldest of the season as well. However, Caribou, at a higher elevation, was “only” 10 below. Its coldest so far this winter is 17 below.

For those who may not know, the state record is 50 below zero, set out at Big Black River in western Aroostook County on Jan. 16, 2009.

The cold morning of the 9th, followed the storm of the season, which saw numerous snowfall reports of 20-plus inches north of Caribou. The storm had a big finishing kick of wicked whiteouts, along with blowing and drifting snow on Friday evening, the 7th. In the photo, taken by Caleb Jandreau in Fort Kent on Feb. 10, you can see it was quite the undertaking, even requiring canine help, to remove the snow from roofs up there. 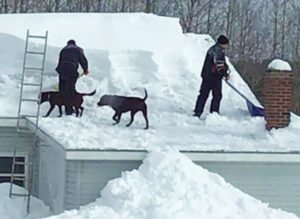 Let’s talk a little bit about the wind. When wind encounters varied terrain, such as hills or mountains, precipitation totals are impacted. If you live at a higher elevation and the wind is blowing up toward you, your snow or rain totals will be enhanced.

But on the other side of your higher elevation, down in the valley, the totals will be reduced. A classic example of the impact of terrain is out in Washington State, where the very wet Coast Range has spots which average more than 130 inches of precipitation, while the eastern part of the state only averages about seven. All of the precipitation moving in from the Pacific gets “wrung out” as it passes over the Coast Range and then the Cascades. Were it not for the mountains, there would not be such a sharp difference in average annual precipitation from west to east across the state.

An excellent way to visualize the impact of terrain in our area is to search for “Plaster Rock, New Brunswick” on Google Maps. Now add terrain (the three bars at the upper left of the screen give you that choice). Now that you can see the terrain, zoom out a few times for a wider view. Using what I just wrote in the paragraph above, about the impact of terrain on precipitation, you can find where you live and see what the terrain is like in your area. Note the higher terrain just west of Winterville. An easterly wind would glide up and deliver more snow on the windward side, the side the wind is coming from, and less on the leeward side, at lower elevations.

When listening to forecasts for winter storms, it’s always handy to know from which direction the wind will be blowing, as it will inform you whether you could have localized areas of more or less, depending on where you are, relative to the terrain.

Speaking of forecasts, you’ll often hear the words “probability of precipitation.” But what, exactly, does that mean? Does a 40 percent chance mean that 40 percent of the forecast area will see precipitation?

The answer is no. It actually means that within the forecast area, any given point has a 40 percent chance of seeing measurable precipitation (at least 0.01″ of rain, or 0.1″ of snow) during the time frame of the forecast. Regarding the wording you hear in forecasts, “isolated” means 20 percent, “slight chance” is 30 percent, “chance” is 40 or 50 percent and “likely” is 60 or 70 percent. “Numerous” (for showers or thunderstorms) is 80 percent. When the forecast is for a certainty of region-wide rain or snow, you might hear, “Today, snow. Probability of precipitation 100 percent.”

The last thing I wanted to touch on this week is snow fences. Many people think these fences physically block the snow, holding it back, as it were. Instead, they work by doing something else. They disrupt the wind carrying the snow, so the snow drops out, before reaching the road.

Hot off the presses — The County saw its lowest temperature of the season thus far on the night of Feb. 14/15: -36 degrees at Masardis. Caribou’s -24 was its coldest in more than six years. Presque Isle fell to -32 and Houlton registered -30. It was cold enough so that folks were able to try the insta-freeze experiment, tossing boiling water into the air. If you’ve never seen that, check it out online.

Ted Shapiro holds the Broadcast Seal of Approval from both the American Meteorological Society and the National Weather Association. An Alexandria, Virginia native, he has been chief meteorologist at WAGM-TV since 2006. Email him at tshapiro@wagmtv.com.

It was a freezing day across The County, but you could hardly tell from the turnout. Even after a massive surge in absentee ballot requests across the Central Aroostook area, droves of people came out to vote in Presque Isle, Mapleton, Washburn and Fort Fairfield.
Pets END_OF_DOCUMENT_TOKEN_TO_BE_REPLACED