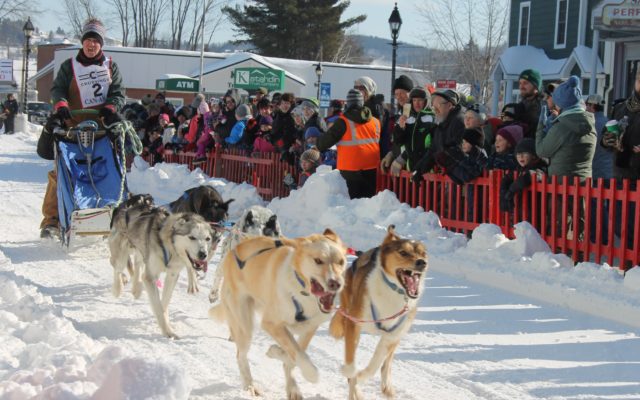 Morgan Mitchell • February 29, 2020
Spectators gathered at the finish line at Lonesome Pine Trails in Fort Kent to cheer on mushers as they arrived at the end of their 30-mile trek through Fort Kent at the Can-Am Sled Dog Races on Feb. 29. Race winner was racer No. 25 Rico Portalatin with a time of 2:24:11.

FORT KENT, Maine — Spectators gathered at the finish line at Lonesome Pine Trails in Fort Kent to cheer on mushers as they arrived at the end of their 30-mile trek through Fort Kent at the Can-Am Sled Dog Races on Feb. 29.

Albert said she is more handler than musher, though she does like to run the trails with her “puppies and teenagers.”

“I am mom, I am the mother,” she said. “I just want to make sure that they are happy to be on the sled and train.”

Albert, who has raced for at least 10 years with eight of those participating in the Can-Am, crossed the finish line first, though she was not ready to celebrate until she got the final results.

“I enjoyed the race,” Albert said about the 30-mile race. “I am not sure about my team. They are training for the Yukon Quest to run this year so my speed training is very slow.”

The one Albert said she was looking out for was a great competitor, and that was Portalatin who came in first.

“I think we did well,” he said. “I had two younger guys on the team and one young leader. It went extremely well.”

While he said he was worried about the trails after the weather earlier in the week, he was pleased with how it turned out.

“I mean following this wind storm, and the snow storm, I was expecting the trails to be much worse, but clearly they put in a lot of time and work to maintain the trails and it shows. I mean it was really good.”

He said there were some snow drifts, but his dogs “went through that stuff pretty easily and maintained enthusiasm.”

Portalatin said in the last 12 years, his team has raced in 11 of the Can-Am races. The only reason his team missed one year was because one of his dogs had a litter of puppies, he said.
“It’s a great race, a lot of fun,” Portalatin said. “My wife and I look forward to it every year, and the crew and folks in the town of Fort Kent really do a great job.”