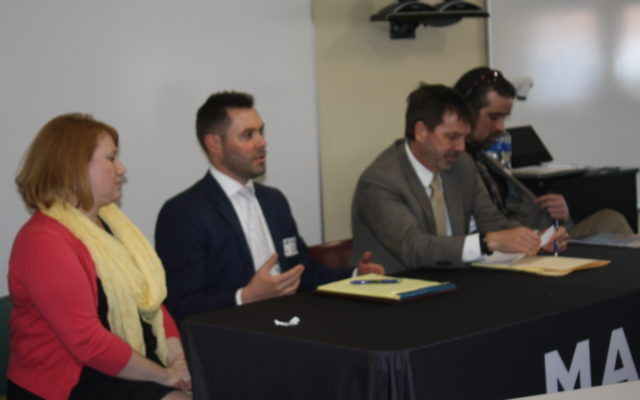 Lawyers speak about the challenges, rewards of law careers in Aroostook County

On Thursday, March 5, UMPI and the University of Maine School of Law, based in Portland, held a special Law Day on the Presque Isle campus for prospective students.

The day not only showcased the two schools’ 3+3 transfer agreement, which allows UMPI students to begin a law degree and finish their undergraduate studies in the same year, but also allowed attorneys to share personal and professional success stories.

During an hourlong panel discussion, Kari Wells-Puckett, an assistant district attorney for Aroostook County, Adam Swanson, attorney with Swanson Law, P.A. in Presque Isle, Scott Hunter, a partner at Solman & Hunter in Caribou, and Dan Umphrey, attorney at Solman & Hunter, began by talking about growing up in Aroostook County and how they developed an interest in the legal field.

Wells-Puckett, a graduate of Presque Isle High School, initially studied archaeology while attending college in Pennsylvania and worked in museum education. She later returned to Maine and worked in the development office at the University of Maine in Orono while earning her master’s degree. She enrolled in the University of Maine School of Law after realizing that she still had a strong interest in becoming an attorney and graduated in 2009.

Despite graduating in the midst of the Great Recession, Wells-Puckett landed an internship, and later a staff position, at Bemis & Rossignal in Presque Isle. As assistant district attorney, she handles criminal prosecution cases for Presque Isle and surrounding communities and often communicates with law enforcement officers on matters related to criminal investigations and charges.

With Aroostook County being a small, community-focused region, Wells-Puckett said that attorneys often have more opportunities to build positive relationships with their colleagues.

“In our day-to-day work we’re often on opposite sides in the courtroom, but outside of work we get along really well,” Wells-Puckett said. “I’m not sure if that happens in many other regions.”

All four attorneys from Thursday’s panel are graduates of the University of Maine School of Law. Swanson, a 2012 graduate, grew up in Mapleton and realized during his undergraduate years that he had interest in owning his own business and studying law.

After attending law school, Swanson worked as a court clerk in Portland after being unable to immediately find work as an attorney. The judge for whom Swanson was working for gave him advice that proved to be life changing.

“He said, ‘Go back home and hang up your shingle there. There are rural communities out there who need attorneys. The caliber of attorneys in those areas are as great as those in urban areas,’” said Swanson, who focuses primarily on civil litigation and criminal defense.

The latest data from Aroostook County shows that there are only 75 lawyers in the region, with 16 being age 70 or older and 20 between the ages of 60 and 69. With nearly half of the lawyers nearing retirement age, many younger attorneys are eager to highlight the benefits of practicing in northern Maine.

Hunter, a Caribou High School graduate, said that Aroostook County provides attorneys more opportunities to find their own niche in their community and give back through volunteerism.

“When I came back to the region, I was able to become involved with the community and become a sports coach while my kids were going to school,” Hunter said.

Umphrey, also a Caribou native, advised students to learn as much as they gain about the legal field before deciding if law school is right for them.

“If you’re interested in this type of career, just go to court as a public observer and see what goes on on an average day,” Umphrey said. “There are people who are very willing to answer your questions or give you a tour.”

Members of the Houlton Band of Maliseets will head to the ballot box in order to determine who will be elected as their new tribal chief.
Pets END_OF_DOCUMENT_TOKEN_TO_BE_REPLACED
6 days ago