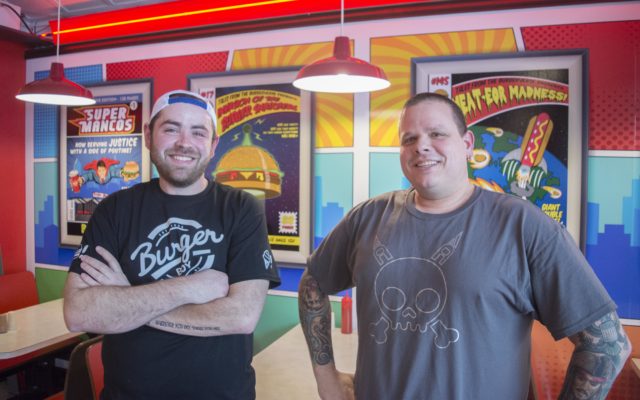 Chris Bouchard • March 16, 2020
Burger Boy restaurant in Caribou reopens for a new season under new ownership. The new owners are preserving the classic eatery and sprucing up the interior with new paint and historical touches.

CARIBOU, Maine — Winter is nearly over and, for the people of Caribou, that means Burger Boy is once again open for the season.

This year, the restaurant is opening under new ownership and a completely new aesthetic thanks to Joe Lapierre and his team of designers at Boulevard Graphix.

Dustin Mancos, a Caribou native who also owns Winnie’s in Presque Isle, purchased the restaurant around the start of the new year, and said that running Burger Boy has been a personal dream for nearly a decade.

Mancos started working as a Burger Boy employee in 2013 and, on his first day, told former owner Spenser Ouellette that if Ouellette ever considered selling the business, he would be ready to buy it.

“It’s funny how it happened,” he said. “I’d closed Winnie’s for the season, and at about that time I heard Spenser announce that he was selling the business. I called him that night and told him I was coming to get it.”

Ouellette made the announcement via the restaurant’s Facebook page in September of last year, letting the public know that he was deciding to sell the establishment.

“After seven great seasons with many updates and improvements,” the former owner wrote, “it’s time for me to focus on my other companies in central Maine in order to spend more time with my son and soon to be wife every week.”

In January, Ouellette announced that he would be passing the torch on to Mancos, concluding that his “knowledge of Burger Boy and his love for community involvement will ensure his success as the new owner of Burger Boy.”

Mancos worked with Lapierre to completely redesign the restaurant’s aesthetic while still maintaining its charm as a throwback to the 1950s.

“The biggest thing we wanted to do was create an experience for Dustin’s customers,” said Lapierre. “We wanted to create a happy feeling when people walk in the door; that’s what started the whole creative process.”

Now, the walls are completely covered in hand-drawn designs featuring comic books with themes that relate to both Burger Boy and Caribou. One comic even references that the restaurant was built over the city’s former public pool while another features a burger pulling up a moose like a flying saucer.

The designs all feature immense attention to detail, and even the barcodes on the fictional comics reference the city and its iconic restaurant.

“It would start with something as simple as a hot dog rocket ship,” said Mancos. “He sent me that idea at three in the morning, and then two days later he has a barcode on a comic book poster, in a picture frame, ready to go on the wall.”

“We wanted everything to come back to the restaurant, Caribou or Aroostook County,” said Lapierre.

Another wall features two traced drawings of Aroostook Republican articles published around the time of the restaurant’s original opening in 1968.

“Everything is identical to the original articles,” said Lapierre. “The one of the far wall explains the history of how this place was built on an old swimming pool and how they had to go through the city zoning board. A nd the other is from the original grand opening. Everything was taken directly from the Aroostook Republican and redrawn on an iPad Pro.”

After 550 hours of work from Lapierre and his team, opening day was just around the corner. Mancos held a soft opening on March 9 for just three hours, from 6 to 9 p.m., and in that time he said he made almost a full day’s worth of sales.

“I just invited my friends and family, and the 27 employees I’d hired,” Mancos said. “And I thought, you know what? Let’s do it. So I put out a road sign saying we’re open, and there was a line out the door, to the road, and around the building for three hours straight.”

Mancos plans to continue hosting popular community events at the restaurant, such as the car show, while adding his own events and raising money for worthy causes.

He said he was inspired by a trip to Firehouse Subs, a national restaurant chain established by two firefighting siblings, in which proceeds from sales benefits first responders.

“I thought it was an awesome idea,” he said. “I have this idea of customers donating a quarter for a cause, where each month there would be a new cause and we can ask customers if they’d like to donate a quarter after their purchase.”

Mancos also said he would like to add “First Responder Friday,” which will assist local first responders.

“People always forget the fire and police department unless you’re getting pulled over or your house burns down,” he said, adding that he’s often had his crew at Winnie’s bring them dinner.

Mancos said he is thrilled to be at the helm of one of the city’s most iconic restaurants, and to be working in a place that he has always considered home.

He said he was inspired by former Hannaford bagger Bob White, who would push carts and high-five everyone entering the store. In Mancos’ teenage years on the school little league team, he found White cooking hot dogs and onions on the field.

“Grilled onions and hot dogs were the only thing you could smell on that field “and that’s where I fell in love with food in Caribou,” he said. “I grew up in Caribou. I went to school in Caribou, and my family is all from Caribou.”

Mancos said he already recognizes customers from when he worked at the restaurant five years ago, and that he remembers their names and what they like to order.

Winnie’s will remain open during the season while Burger Boy is up and running. Mancos said the Presque Isle restaurant will reopen for the season during the first or second week in April.

As for Burger Boy, both Mancos and Lapierre are excited to see people return to a restaurant that has been in the city for more than half a century, and enjoy the same level of service and familiar menu — with a fresh coat of paint.

“It’s fun seeing people come in for the first time,” Mancos said. “Their eyes are huge, and that’s what brings me joy. Every ounce of blood and sweat I put into this place pays off when people come in and see it.”

Just when we thought we were out of the woods with kitten season, it has hit full force.  The past few days have been difficult answering the phone and hearing the stories of why people have litters of kittens they need to surrender.
Campaign Corner END_OF_DOCUMENT_TOKEN_TO_BE_REPLACED