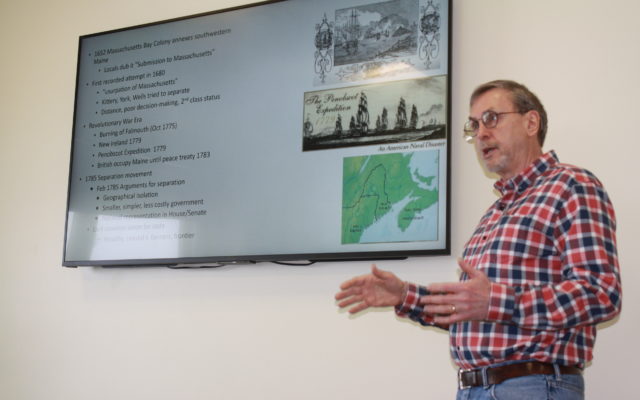 Melissa Lizotte • March 16, 2020
Despite a winter weather advisory and concerns surrounding the coronavirus pandemic, a small group of people gathered at Northern Maine Community College’s library on Friday to kick off local celebrations of Maine’s bicentennial.

PRESQUE ISLE, Maine — Despite a winter weather advisory and concerns surrounding the coronavirus pandemic, a small group of people gathered at Northern Maine Community College’s library on Friday to kick off local celebrations of Maine’s bicentennial.

NMCC humanities instructor and chair of the arts and sciences department David Raymond presented a history on Maine’s efforts to separate from Massachusetts, which eventually led to statehood on March 15, 2020.

The first recorded attempt to separate from Massachusetts occurred in 1680, with numerous rural Mainers believing that their geographical isolation from Massachusetts left them out of important political decisions, forced them to pay additional taxes and led them to be treated as second-class citizens.

Many colonists in Maine also opposed British control of seaside ports in towns such as Falmouth and Machias, though in Falmouth there was a good amount of Loyalists — American colonists who supported the British. In June 1779, Massachusetts put together the Penobscot Expedition, a fleet of 40 naval ships and 1,500 soldiers. The Expedition proved unsuccessful when the British forced the fleet up the Penobscot River and all the ships were lost in the battle.

The debate over separation from Massachusetts picked up traction in 1785 when the more wealthy coastal areas spoke against the idea due to their trade with Boston ports. But the separation would prove to be several decades in the making due to military conflicts during the Revolutionary War, the War of 1812 and the British re-establishment of control over eastern Maine.

Maine colonists did not officially vote to separate from Massachusetts until 1819 when 17,091 colonists voted in favor of the measure versus 7,132 who were opposed. A constitution was drafted but there was one more obstacle to face in the Missouri Compromise.

In 1820, slavery was the dominant political issue of the United States, with the southern states arguing for an equal amount of free states and those that retained slavery. If Maine became a state, there would be one more free state added to the map. Maine had to achieve statehood by March 4, 1820, or else become legally part of Massachusetts again. Maine became the 23rd state of the union in 1820 due to the Missouri Compromise, which allowed Maine to enter the union as a free state and Missouri as a slave state.

Raymond said that amid the recent cancellation of many bicentennial events in other parts of the state, it is important to remember Maine’s history and to attend celebrations locally.

“I’ve taught Maine history for the past 25 years and it’s always been my favorite topic,” Raymond said.

Kim Smith, chairperson of Presque Isle’s bicentennial events, pointed out that the only bicentennial event cancellation for Presque Isle has been a Maine History Trivia Contest scheduled for April 8 at the University of Maine at Presque Isle. UMPI has been working to transition classes online and move students from dormitory halls in an effort to prevent spread of the coronavirus.

All other bicentennial events in Presque Isle are expected to take place on their scheduled dates at this time.

It was a freezing day across The County, but you could hardly tell from the turnout. Even after a massive surge in absentee ballot requests across the Central Aroostook area, droves of people came out to vote in Presque Isle, Mapleton, Washburn and Fort Fairfield.
Pets END_OF_DOCUMENT_TOKEN_TO_BE_REPLACED