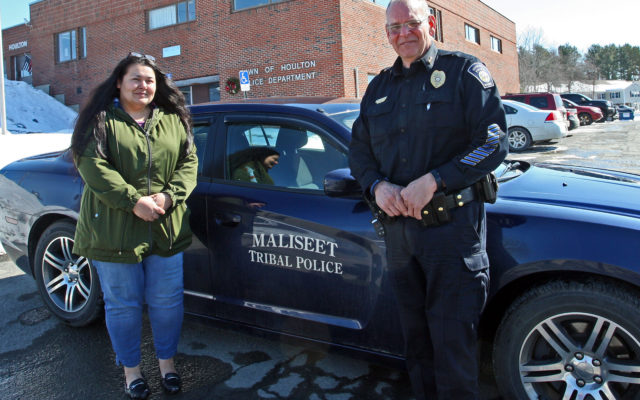 Joseph Cyr • March 18, 2020
The Houlton Police Department has a welcomed addition to its fleet of vehicles thanks to a generous donation by the Houlton Band of Maliseet Indians. Tribal Chief Clarissa Sabattis presented Houlton Police Chief Tim DeLuca with the keys to a 2013 Dodge Charger March 18.

HOULTON, Maine — The Houlton Police Department has a welcomed addition to its fleet of vehicles thanks to a generous donation by the Houlton Band of Maliseet Indians.

“We have had this cruiser that has been in storage since we stopped funding our Tribal Police department [back in 2014],” Sabattis said. “I knew we had this vehicle sitting in storage and I made a request to our council to donate this vehicle to the town. We have been a good partner for the town and I thought this would be a great opportunity to help.”

The vehicle, which came fully-equipped with police equipment, including a compatible radio system and radar gun, will be used as an administrative vehicle for the police staff.

“This vehicle is a godsend for us right now,” DeLuca said. “We did not have any scheduled new cruisers for this year, and the one from last year is still on order. It will give us an opportunity to move one of our administrative vehicles back out to the front line for patrols.”

DeLuca said the vehicle has just 8,000 miles on it, despite its age, and is in otherwise pristine condition. The tribal police lettering will be removed, but the deep blue colored vehicle will not be re-painted to match the other vehicles’ colors of black and white.

The police chief expressed great appreciation to the Maliseets for their generosity. A piece of sage will remain hanging from the rearview mirror as a tribute to the Native American heritage, and a special sticker will be adhered to the rear bumper of the vehicle.

“It says a lot about the partnership we have with the Maliseet community,” DeLuca said.

Members of the Houlton Band of Maliseets will head to the ballot box in order to determine who will be elected as their new tribal chief.
Pets END_OF_DOCUMENT_TOKEN_TO_BE_REPLACED