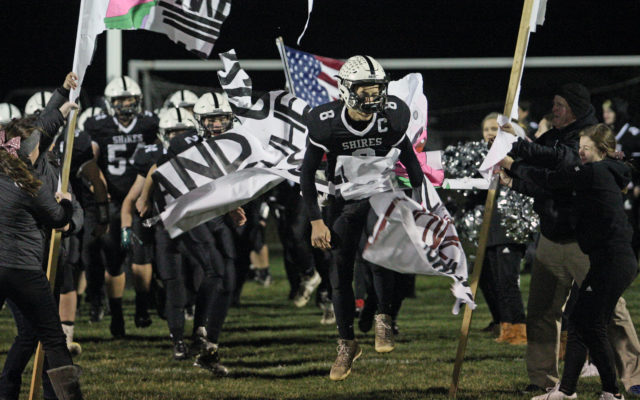 Joseph Cyr • April 10, 2020
A member of the Houlton football team has been selected to the 2020 Shrine Lobster Bowl Classic.

HOULTON, Maine — A member of the Houlton football team has been selected to the 2020 Shrine Lobster Bowl Classic.

Noah Reynolds, a senior at Houlton Middle-High School, was the lone Shire selected for this prestigious honor. He follows in his brother’s footsteps in receiving the accolade. Damon Reynolds was named to the Shrine Lobster Bowl Classic in 2018.

Noah Reynolds said it was a personal goal of his to be selected to the Lobster Bowl, but not just because his brother played in the game.

“I tried to go hard all the time to help us win and when you play like that sometimes this type of recognition will follow,” he said. “It will feel great! I can’t wait to strap the pads back on. After we played Foxcroft in the playoffs I didn’t know if I would ever put them on again.”

“Noah had a great career playing several positions for us and was productive at each and everyone of them,” assistant coach Jon Solomon said. “He was well deserving of this honor and will represent Houlton football well.”

The game is tentatively scheduled for Saturday, July 18, at Hill Stadium on the Thornton Academy campus in Saco. Kickoff is at 4 p.m.

To participate in the game, each player must raise a minimum of $500.  The Kora Shrine sponsored event sees 100 percent of the net proceeds from the game benefitting the 22 Shrine Hospitals for Children across the U.S., Canada, and Mexico.

According to the Kora Shriners website, the Maine Shrine Lobster Bowl Game was created to raise money and to help make the public aware of the expert orthopedic and burn care facilities available to children who desperately need this specialized care, regardless of the patients’ ability to pay.

“Obviously I’m very proud of him,” his father and coach, Brian Reynolds, said. “He was the LTC [Little Ten Conference] regular season rushing leader last season, totaling 1,086 yards with 10 touchdowns. I think that’s quite an accomplishment seeing as he primarily played quarterback his first three years in high school.”

A jack of all trades for the Shires throughout his career, Noah Reynolds played cornerback on defense his sophomore year and was then moved to outside linebacker his junior year. He played both positions his senior year before settling in at inside linebacker in the third game of the season.

“When we informed Noah he was going to be moved from quarterback as a senior he didn’t bristle against it at all,” the coach said. “Instead he replied with, ‘Whatever it will take for us to win, coach.’ I don’t think you can be more unselfish than that.”

“I knew throwing the ball wasn’t my strong suit,” Noah Reynolds said. “I preferred running with the ball and played running back in Peewee and junior high. I felt like I could still lead the team from there so it felt natural and I just was willing to do anything to help us win.”

Noah Reynolds was a four-year letter winner, two-time team captain, a two-time All LTC All Academic team member and was named to the LTC 1st Team Offense at running back this past year.

“Add to that his stellar special teams play and he really was a complete player for us,” Brian Reynolds said. “He played both holder and long snapper on special teams throughout his career.”

Noah Reynolds said he has applied to a few different colleges, one of them being Husson University. “I’m considering walking on to the football team to [try to] play with my brother Damon again,” he said. “However, I really love playing hockey, so club hockey at one of the schools I’ve been accepted to is also an option. But a college education is definitely in my future.”

In addition, Coach Reynolds was asked by East Head Coach Danny White of Foxcroft Academy to help coach in the Lobster Bowl.