Ted Shapiro, Special to The County • May 12, 2020
Thunderstorms can be captivating, putting on one of Nature's most compelling displays.

Thunderstorms can be captivating, putting on one of Nature’s most compelling displays.

Unfortunately, the fact that they ARE captivating, makes a lot of people want to watch them from their porches. Well, you may as well be standing in the middle of a field. The safe zone is indoors. A hard-topped car is fine as well — lightning striking it will pass around the body of the car and you’ll be safe. It’s the metal “cage” you are in, and not the rubber tires, that cars are safer shelter in thunderstorms –hard-topped only.

Once in a while, there are cloud features in the lower part of a storm that tell you that you are not looking at a “garden-variety” thunderstorm. The photo you see is “Exhibit A.” You are looking at a thunderstorm that has developed what is known as a wall cloud — in this case, one which also has a tail cloud extending from it. 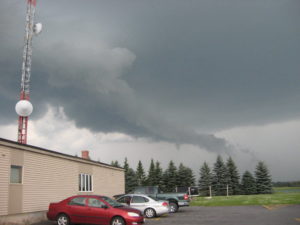 The wall cloud is the whitish base lowering (lower than the rest of the rain-free base of the thunderstorm), right next to the TV tower. The rain-free base of the thunderstorm is the dark-colored cloud that occupies much of the top half of the photo. If there were to be a tornado, it would descend from the whitish base lowering. (Courtesy of Ted Shapiro)

The wall cloud is the whitish base lowering (lower than the rest of the rain-free base of the thunderstorm) right next to the TV tower. The rain-free base of the thunderstorm is the dark-colored cloud that occupies much of the top half of the photo. If there were to be a tornado, it would descend from the whitish base lowering.

So how does the wall cloud form? Air from a higher relative humidity environment, where rain is falling, is being drawn toward the updraft. As it ascends, condensation occurs quickly, as the air rises and cools. This creates a localized cloud — the wall cloud — that is lower than the rest of the rain-free base of the thunderstorm.

Again, the wall cloud marks the spot where the updraft is. And they can happen right here in Aroostook county. Proof? I took the photo right outside of our WAGM studios in the station parking lot.

When a wall cloud starts to slowly rotate, you need to really keep an eagle eye on it for possible tornado development.

Regarding the tail cloud, it is occurring via the same process as the wall cloud. It isn’t coming from the wall cloud. Rather, it has developed as water vapor condenses in the nearly saturated air that is being lifted toward the thunderstorm’s updraft, the location of which is marked by the wall cloud.

Where is this moister air coming from? In the photo, there is rain off toward the northeast, toward Fort Fairfield, in the lower right part of the photo.

It’s important to note that while tornadoes get all the attention, other potentially deadly hazards are encountered with much more frequency here in The County. In fact, there has only been one tornado fatality in Aroostook County in the modern record. It happened north of Caribou, back on Aug. 11, 1954. Kate Taylor of the Van Buren Road in Connor sadly lost her life in the storm.

But with respect to frequency of encounters with thunderstorm-related hazards in a life lived in The County, lightning, flash flooding, hail and microbursts would all be far more commonly encountered, as compared to a tornado.

Either way, they both demand immediate action, which is to get to the basement or, if you don’t have one, to an interior room of your home. The bathroom is preferable since the plumbing can offer extra structural integrity. To avoid flying debris, you can get into the tub and pull something over you.

Ted Shapiro holds the Broadcast Seal of Approval from both the American Meteorological Society and the National Weather Association. An Alexandria, Virginia, native, he has been chief meteorologist at WAGM-TV since 2006. Email him at tshapiro@wagmtv.com.