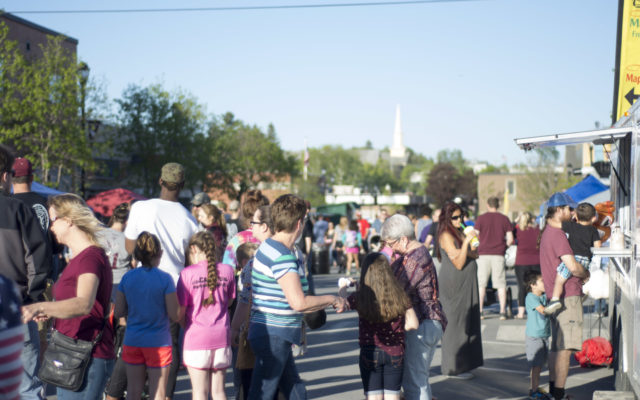 Chris Bouchard • May 13, 2020
The city is looking for ways to encourage residents to get outside while still maintaining their distance and staying safe.

CARIBOU, Maine — Caribou’s popular Thursdays on Sweden street festival — an outdoor event that typically brings in more than 1,000 people — is being pushed back in light of social distancing guidelines related to the COVID-19 pandemic.

In the meantime, the city is looking for ways to encourage residents to get outside while still maintaining their distance and staying safe.

The city recently started “Tooling Tuesdays,” which Caribou Marketing and Events Coordinator Christina Kane-Gibson said is more of a movement than an event, meant to encourage “tooling” — or driving around town from the safety of a vehicle.

The city police department has approved the plan. Participants are being asked to bring masks with them just in case they’re needed, and to purchase takeout or support local businesses that are currently open.

“”We’re all stuck at home right now with cabin fever, but that doesn’t mean we can’t enjoy each other’s company from our cars and wave to friends and neighbors,” she said. “It’s a way to make sure we all see each other a little more.”

As the event continues, Kane-Gibson said she hopes to work with local businesses and offer coupons or discounts to participants.

“We may have some offerings in the future, but for now it’s just an effort to get people outside,” she said. “This winter has been so long. We need some sunshine and some good music with the windows down.”

And while Caribou will not be able to hold Thursdays on Sweden in June or July with the current social distancing requirements, Kane-Gibson and other city officials are working to create an alternative event on June 4, which would have been the first day of the bi-weekly Summer event, she said.

“We’re not quite ready to release anything, but we’re working with different businesses and people to see how we can do this; it just won’t be what you’re used to,” she said. “We want to do something where people can still enjoy live local music.”

There has been some discussion of live streaming concerts, Kane-Gibson said, adding that the city has also been in contact with local radio stations to accommodate residents without access to high-speed internet.

For now, the city is still holding out hope that restrictions could be lifted in the near future and the event could occur in August, she said.

“If not, we’ll keep pushing out that date,” she said. “We’re going to need a party as soon as this is over.”

The Caribou Marathon, a Boston Marathon-qualifying race which this year would be celebrating its fifth anniversary, is still tentatively scheduled for September.

“We’re not canceling it yet,” she said. “We don’t feel this is the best time to seek sponsorships so we’re promoting on social media and are still open for registrations. We’re holding out hope that things get better, but it will all ultimately depend on safety.”

“You can bet that whatever events we had to cancel this year, we’ll do them bigger and better next year,” she said.

It was a freezing day across The County, but you could hardly tell from the turnout. Even after a massive surge in absentee ballot requests across the Central Aroostook area, droves of people came out to vote in Presque Isle, Mapleton, Washburn and Fort Fairfield.
Pets END_OF_DOCUMENT_TOKEN_TO_BE_REPLACED